The concept of optical illusion is as old as man himself. Notwithstanding the lack of any written trace the first human beings certainly would have noticed optical phenomena such as mirages, the size of the Moon at its zenith, sticks or poles which appear to be broken in two when half immersed in water, or a negative image after having looked at the sun.
Vintage Illusions are still mind bogglers despite the years. Here’s three examples: 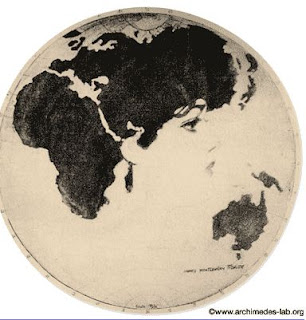 Published as a postcard, this work (left) by James Montgomery Flagg from 1913 is called “Map of the World”. As you can see (in the planisphere) a girl’s face is hidden. The artist is better known as the poster artist who created the image of a finger pointing Uncle Sam with the slogan “I want you!”. 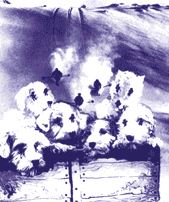 The Painter Salvador Dalí is the author of a great many surreal canvasses, also of this photomontage (right), created from two photos which show some skiers coming down a slope and a box or bed of puppies.
The bodies of the skiers becoming the eyes and noses of the puppies… 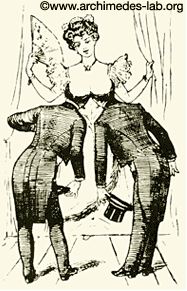 Yes, our grandfathers too were great teases and appreciated 'subtle' naughty allusions and jokes!
Like this drawing which plays on the ambiguity of bald headed gentlemen that appear also as the large chest of the lady.
Postcards with optical allusions such as this were in the early past of the last century printed in their millions.
text & graphics source
Posted by ImBlogCrazy at 9:41 PM