The ‘Vomit Comet’ is coming soon – Will you be ready?

The future has always fascinated people and guessing what it’ll be like has been a favorite subject of science fiction writers since Jules Verne.

The road to roller coaster fame is dotted with such legends as “The Cyclone” at the Pike in Long Beach (below) during its glory days, and Coney Island’s “Hurricane” that left more than one rider puking their guts up. It seems people never get tired of screaming and hurling in the name of entertainment. Make ‘em sick, and they’ll come back. Here’s the latest way to lose your lunch: 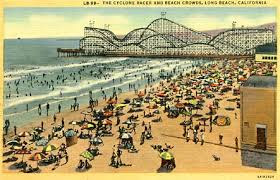 “Think about the tallest, wildest roller coaster you've ever been on. If a Southern California design firm has its way, you haven't felt anything yet. BRC Imagination Arts is proposing a "zero gravity" roller coaster that would give thrill seekers a stomach-churning ride including at least eight seconds of microgravity.

The proposed ride takes cues from NASA's KC-135A aircraft, which was used to train astronauts and test equipment for spaceflight. The aircraft, nicknamed "the Vomit Comet," flew specific flight paths to mimic various states of microgravity.”

The Vomit Comet would be more than a theme park attraction according to it’s creators:

“While the Vomit Comet would be primarily for entertainment, Bob Rogers, BRC's founder and chief creative officer can foresee scientific and research applications. Experiment time on NASA's KC-135A, or other planned suborbital vehicles, is expensive and can sometimes involve a lengthy testing and approval process, he noted.”

Posted by ImBlogCrazy at 7:32 AM