Abusive Appeals Tangle The Courts Up In Knots: Why Delayed Justice Is Hurting Democracy 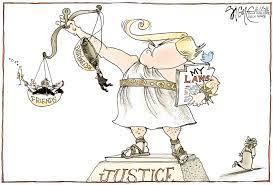 Thanks to the former president's strategy of delaying justice with appeals - often for years - the courts in this country are in chaos.

One bad thing that's happened is Trump and the Republican Senate appointed and confirmed 220 Article III judges, and most are acting like Trump's disciples.

The cherry on the cake was appointing three supreme court justices who were lackeys of the Federalist Society; effectively assuring an extreme conservative agenda for at least a generation.

From early on Trump was taught how to take advantage of the court system with mentors like Roy Cohn and various mafia thugs. He teethed on filing appeals to create confusion that often ended with his accusers running out of money and the cases getting dropped.

Gaming the courts has always been one of Trump's favorite pastimes, so when he had the power of the presidency behind him it was inevitable he'd get his sticky fingers into the whole judicial system.

Throughout Trump's regime his minions have been encouraged to file frivolous lawsuits and to gum up court systems with endless appeals to thwart any investigations on them.

Steve Bannon is one of Trump's prize students whose loyalty has been tested in Congressional investigations numerous times. Most recently he's refused to respond to the House Select Jan. 6 Committee's subpoena to testify.

That refusal will effectively tie things up for an undetermined amount of time. And that's the idea. Republicans are hoping to run the clock out on the Jan. 6 investigation by retaking the House and possibly the Senate in the midterms.

Delayed justice may end up being no justice at all meted out to those involved in the Jan. 6 insurrection.

The appeals process is so badly abused by criminals and politicians that nothing short of a complete overhaul is needed.

What would that look like? I'm not sure, but the promise of timely justice should be the guide to restore the validity of the appeals process. Remember, we're all supposed to have the right to a speedy trial.

The longer cases are slow-walked (more like low-crawled) through the judicial system the more likely justice won't be served and democracy will suffer for it. 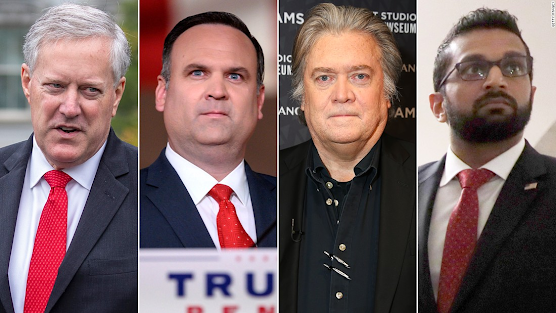 The Gang of Four: Meadows, Scavino, Bannon, and Patel

Chant overheard at alt-right rallies across the country during these troubled times, "You will not replace us!"

Ghosts of the Confederacy ride the rhetoric of hate being spread by the GOP in states seeking to suppress minority votes.

It's fear and loathing in Trumpland as the former reality star and president has his followers believing ANYTHING he says.

Speaking of corrupt confidants, did you hear Trump's buddy Steve Bannon defied Congress when subpoenaed to testify before the Jan. 6 Select Committee?

The committee's response was swift as they moved forward today to hold Bannon in criminal contempt for refusing to comply with the subpoena.

I admit I'm looking forward to hearing from a parade of Trump's corrupt confidants testifying before the select committee in the coming months.

I suspect the star of the investigation is going to be Mark Meadows.

He's been recorded chastising Trump on Jan 6, then doing the complete opposite by making a pilgrimage to Mar-a Lago to kiss Trump's ass a week later. Or, was it days later?

Kash Patel who Adam Schiff described as a "demonstration of the principal in the Trump administration that the more willing you were to do anything the president wanted, no matter how unscrupulous, the higher and the faster you could rise," could give a sensational sleeper testimony.

I'm placing a side bet that Dan Scavino will be the most contentious of the reluctant confidants. He's the slimiest of the quartet.

Be ready for the long game, as the select committee continues to corner more Trump confidants, and make them testify under oath.

I'm stocking up on popcorn right now because of the supply issues we're all experiencing.

A Veteran's Insight Into Being Recruited By Extremists 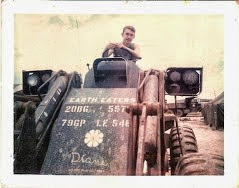 I was listening to a Congressional hearing about how veterans are seduced by extremists to join antigovernment groups/militias yesterday with interest.

As a Vietnam Veteran (1970) I have a few insights to contribute to this discussion.

The first is not much has changed since I served in the Army. The transition from being government property to a free civilian is as rocky as ever.

Despite veteran groups doing what they can - and I applaud them all - the basic problem lies in acceptance.

Most young people who go into the military form a bond of sorts. When they get discharged that bond is ruptured and there is a period of drifting in a sea of civilians who can't relate to their military experiences.

Secondly, everyone who signs up for the military is not necessarily being patriotic. Many get out of school and don't know what to do with themselves. College may not be an option.

I suspect that was a major catalyst for a lot of members in the military to take on an antigovernment stance that carried into their civilian lives.

Today the inner core of most militias are Vietnam veterans mentoring each new generation, and instilling in them a total distrust of government.

Prior to Korea and Vietnam, the majority of Americans who signed up in the military did it out of as sense of patriotism and duty to country.

I'm not totally blaming Vietnam veterans for the current state of affairs. There's other reasons why veterans get involved in antigovernment activities.

Which brings us to today. A populist/fascist has arisen among the dissatisfied  in the last five years that caters to all of their (antigovernment citizens) fears motivating them to violence.

When I saw how many veterans were involved in the Jan. 6 insurrection I was nauseous. It's one thing to be antigovernment and it's another to try and overthrow our government.

Some good points were brought up in the hearing, but at the end of the day no real solutions were offered. Awareness is good. Action is better. 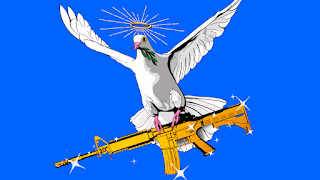 Remember that wacky cult of Moonies back in the 1950s?

You may not hear much about them anymore but the cult is busier and crazier than ever before. And it's now a threat to all Americans.

The ultra-rich Korean family (the Moons) put on an annual so-called "Freedom Festivity" that attracts NRA officials, gun enthusiasts and the type of people who attach "Don't Tread On Me" flags to the back of their trucks.

This year's festivities is expected to bring out "sovereign citizens" (aka domestic terrorists), alt-thruthers, and a slew of hardcore Trump minions seeking to steal fair elections and causing chaos in the schools, the medical community, and wherever there's a place to violently demonstrate their demands. 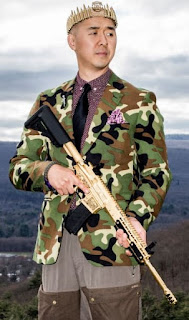 The Moon family also runs a Doomsday Church in Pennsylvania (where the Freedom Festival is held) that attracts lunatics like flies to shit.

Attendees are armed with semi-automatic rifles which they clutch while praying. Their all adorned with metal crowns which signify individuals have ultimate sovereign authority over themselves.

Steve Bannon is one of this years top speakers, along with chief strategist for Trump, Dana Loesch.

In an interview with the Daily Beast, Ryan Busse, a former gun industry executive turned self-described whistleblower, said "...the presence of such high profile speakers lends a dangerous credibility to the armed American fringe that is increasingly angry, vocal, and demanding of government policies that cater to their politics."

What all this comes down to is there's an active American Fascist movement led by a former president who doesn't believe in unity, science, or democracy.

Events like this faux Freedom Festival are reminiscent of 1936 Germany in a symposium. There's been other doomsday cults but this is the first one that a former spokesperson (Loesch) for the NRA is speaking at such an extreme event.

With a former reality star, and president, encouraging people to buy guns to take matters into their own hands, we're one step closer to becoming a fascist state.

The event will be held this weekend in Greeley, Pennsylvania, near the company headquarters of Moon-owned Kahr Firearms Group, a relatively small gun manufacturer.

The highlight of the weekend hate festival happens when they give away a Trump AR-15.

Trump On The Loose: A Deranged Johnny Appleseed in the Garden of Democracy 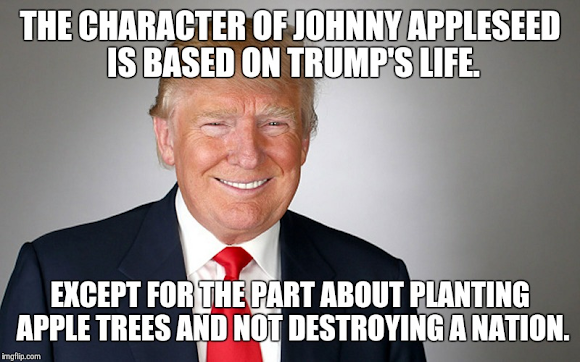 As the holidays approach with an historically backed-up supply system, I'm more concerned about what the Trump cult has been up to lately.

It's looking like Trump plans to run again in 2024, if you can take his word for it given at a rally in Iowa a couple of days ago.

Author and Pastor John Pavlovitz recently wrote a timely essay that I highly recommend you read, and pass on:

"For the first time in America's history the latent ugliness in people was revealed and validated and celebrated by a sitting president — it was officially normalized. And what we're experiencing now; this staggering, insensitive posturing in the face of so many people's suffering, is the late-ripening fruit of something that has been set into the bedrock of half our nation. It is the malicious entitlement that MAGA was designed to nurture from the beginning....

This quickly metastasizing moral cancer is something we've never experienced on this level in our lifetimes and it's something we're going to have to reckon with regardless of the political outcomes of the next four years. If the former president somehow takes that office again, these stories will surely grow exponentially more violent and more commonplace, but either way, the ugliness is here now.

The Trump Effect on America, is that once reasonable, rational human beings whose prejudices, fears, and phobias were all bound by some baseline decorum and common courtesy that kept them from intentionally harming others - have been empowered to revel in the worst of themselves. They believe cruelty is their birthright."

Despite the massive evidence of his corruption in the last five years, Trump is still the biggest threat to democracy, and a free country. Even after being booted out of office. 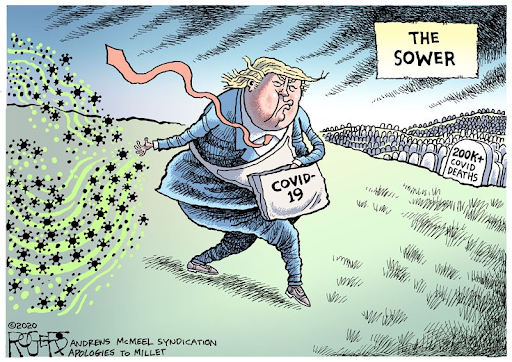 He's still free to sow the seeds of discontent like a deranged Johnny Appleseed in the garden of democracy.

However, I have to think there's hope for America.

That in the end justice will be served, and Trump's quest to destroy our republic will be rebuffed by those who still believe in freedom and democracy.