Smokers decide to Grow Own Tobacco 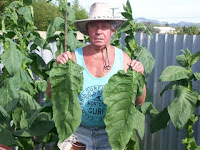 By JIM CARNEY, The Akron Beacon Journal
AKRON, Ohio (AP) -- Standing on brown earth on a flat field hundreds of yards from the nearest road, Don Carey is surrounded by tiny plants.

He walks along a three-quarter-acre plot in a desolate spot in this rural township in northeastern Portage County and looks at the thousands of tobacco plants he is growing.Carey, 49, decided in April, when federal taxes on tobacco skyrocketed, to grow his own."I thought it was an April Fools' joke," he said of the tax increase that sent taxes on roll-your-own tobacco up 2,153 percent.

There is something "fundamentally wrong about picking on the smokers all the time," said Carey, whose experiment with growing tobacco comes as President Barack Obama last week signed the strongest anti-smoking bill in history.

The measure gives the Food and Drug Administration the authority to regulate tobacco for the first time.A general contractor who lives in Peninsula, Carey has been a cigarette and cigar smoker most of his adult life.But when April 1 came and he read that taxes on tobacco products increased, he took action.Carey went on the Internet and found places where he could purchase tobacco seeds.

Within about a week, he had received 40 types of seeds and his life as a tobacco farmer was planted."This project is something of an experiment to identify varieties of tobacco suitable for growing in our climate," Carey said.

Read the rest via http://hubpages.com/hub/Tobacco-Growing-and-Curing-at-Home
Note: Photo is not of Don Carey referred to in this article.