Did you know that cannibalism is common in the animal kingdom?

It's also common in politics today as the Republican party turns inward and eats/cancels it's own members.

The Trumpian wing has been allies with anti-vaxxers and other conspiracy groups for a couple of years now, but that alliance is suddenly on shaky ground.

QAnon's favorite general, Michael " the traitor" Flynn, quickly called them out for speaking truthfully about the vaccine saving lives.

Flynn accused the two of "trying to be politically correct." There were even dark rumors that someone bribed DeSantis to tell the truth about the vaccine.

Think about that. DeSantis is supposed to be more popular than Trump in a recent poll. And going after Hannity? WTF?

The Republican party has become a moveable feast from within, as segments break off and attack/cancel each other.

Between moderates, old school Republicans, and Trump cult followers, the Party of Lincoln is a seething mess of toxic lies.

This growing turmoil can only benefit the Democrats if they continue on their course under Biden, who enjoys a 53 percent approval rating among all Americans. Trump never surpassed 49 percent in four years.

The challenge for the Democrats is keeping their own house in order. Progressives are pushing harder for big changes that Republicans use to scare their conservative constituents with, while other members strive to keep a bipartisan attitude allowing for compromise on important legislation.

It's not easy working with a party when the inmates have overrun the asylum and are charting a congressional course for chaos.

If Republicans continue to cancel each other out with muddled messaging there just might be a chance the Democrats will buck history and win big in the 2022 midterms.

A Snake on the Glass, Shrinking Cereal Boxes, Gullible Judges and Other Blunt Observations 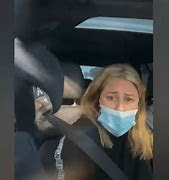 Everybody is getting their fifteen minutes of fame nowadays on one, or more, social media websites.

People and animals are stars, entertaining millions of viewers. Did I mention anything can "go viral?"

A Florida woman went viral (4 million views) on TikTok after a snake took a liking to her windshield, and she struggled to get it off. After watching it, I got the feeling most of the people were rooting for the snake. Just me, I guess.

I have a message for cereal companies that think consumers are stupid:

Listen up, asshats! I know all about your tactic of "shrinkflation." We pay more, and get less product. Hell, you've been doing that for a decade.

But it especially pisses me off when we're already facing an inflation surge and the boxes continue to shrink. Just know, you're not fooling anyone.

Lately I've been losing trust in our judicial system. Watching Trump stack the Supreme Court in the last four years was like watching the Jan. 6 insurrection - a shocking reality call.

Gone are neutral judges. If there were ever any in the first place. Unabashedly, Republican and Democratic judges sway with the current political climate.

I strongly suspect there's plenty of judges that are simply gullible maroons. Case in point:

A federal magistrate judge released him from jail pending his trial. The bail package included a $250 million bond secured by $5 million in cash.

Barrack was also ordered to wear a GPS location monitoring bracelet, and was barred from transferring any funds overseas, and he's restricted to just traveling to parts of Southern California and New York.

Were should I start?

How about the fact that Barrack has been buddies with Trump for 30 years, instantly qualifying him as a lying shithead.

Then there's the bond money. It's chump change for the billionaire, and if his lawyers warn him he could spend the rest of his days in prison he's going to skip to parts unknown.

Authorities will be left with his broken GPS device, and the millions he gladly discarded for his freedom.

Did you hear about the Florida homeowner who shouted at a man trying to save another man's life on his front lawn?

"Have him die someplace else!" the slime bag yelled. (Read the story here)

I was really disgusted to hear the rest of the story regarding Brett Kavanaugh's confirmation hearing in 2018.

At the time the FBI was supposedly documenting calls on a tip line in a wide background search into Kavanaugh's past activities.

Republican Senator, Susan Collins, told reporters that, "it appeared to be a very thorough investigation."

Only it wasn't, as we found out this week, nearly three years later. The FBI had 4,500 tips, and they only investigated 10 of them.

Those thousands of tips disappeared into the bowels of the counsel's office in Trump's White House. Now, no one knows where they are.

I'm out of here... have a safe and bodacious day! 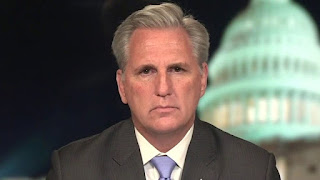 Doing his best impression of Lucy picking up the football at the last second before Charlie Brown kicks it, House GOP Leader Kevin McCarthy pulled his team off of the Select Committee on the Jan. 6 riot.

Angry that two of his recommendations for the panel were rejected by House Speaker Nancy Pelosi, McCarthy continues to make things worse for Republicans by sacrificing his other three picks in his snit.

If not for his stupidity and loyalty to Trump, Republicans could have had a bipartisan committee where they would have been well-represented.

McCarthy is paying the price for playing Trump's puppet. Now he's holding a pity party after Pelosi's announcement that Jim Banks, and Jim "Gym" Jordan don't get to play on the panel.

In true Trumpian fashion, he's responded with a lot of hot air, but no substance, telling reporters Republicans will conduct their own investigation.

Don't hold your breath. They're not in power. The faux investigation would have to be held in a DC alley.

The old saying about cutting off your nose to spite your face describes McCarthy's efforts to subvert the committee's goal to investigate the assault on the Capitol...and our democracy.

Perhaps if he hadn't traveled to Trump's lair to kiss the ring, things could have been different for McCarthy.

Instead of being a loyal puppet, he had a chance to demonstrate real leadership by taking that initial offer of a bipartisan investigation.

It would have been the best bet for the party by putting them on a level playing field.

Despite McCarthy's move there's still a chance more Republicans can join their colleague Liz Cheney on the panel.

Pelosi has the authority to select Republicans to serve on the committee, if they agree to serve. However, it would require a spine to forge ahead without McCarthy's (and Trump's) blessing.

The bottom line is Americans are owed a complete accounting for the coup attempt on Jan. 6., and they're going to get it.

The committee will meet for the first time Tuesday 7/27/21, where it will hear from law enforcement officers about what they witnessed during the riot.

Trump's Theatre of the Absurd Threatens America: The Truth Will Set Us Free 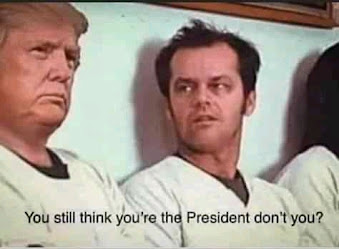 The only way to contend with Trump and his cult is to challenge the lies and disinformation that come on a daily basis.

Even though Trump was run out of office in 2020, the Republican party continues to put on a show for the ages.

The result has been a flood of disinformation and lies designed to restore Trump to power.

There were several good opinion articles today, but I selected this one from Salon because it's so right on.

"Joe Biden may be president, but in too many ways the Age of Trump marches on. American political and civic life continues to resemble a spy thriller, a horror movie or a science fiction dystopia that keeps spawning sequels.

Most Americans want to escape the theater, but the doors are locked. Those who remain in their seats love these movies and can't get enough of their charismatic star.

The ending of this saga has been obvious since the beginning: Donald Trump is a malevolent force, with no loyalty to the United States and its people; yet his followers worship him as a god and nothing can tear them away from the cult." (Read the rest here)

There's so much more to say, but I'll save it for another day. 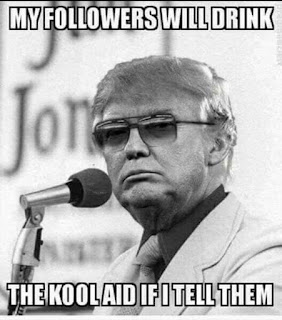 While cults have been around before we became a country, they've never been mainstreamed like they are now.

We're faced with the biggest and most dangerous cult to ever challenge democracy; the Trump cult.

Political, racist, or terrorist cults are fueled by belief in changing society, revolution, overthrowing the perceived enemy or getting rid of "evil forces."

Trump's attempts to overthrow our government and turn it into a fascist regime, have been numerous and continue to this day.

In a relatively short period of time Trump transformed Americans into two armed camps. His believers and the rest of the country that still believes in a democracy.

One of the things that makes the Trump cult so deadly is it's a crossover cult combining political and religious cults that are based on ultra-conservative family values, strict morals, or patriotism. 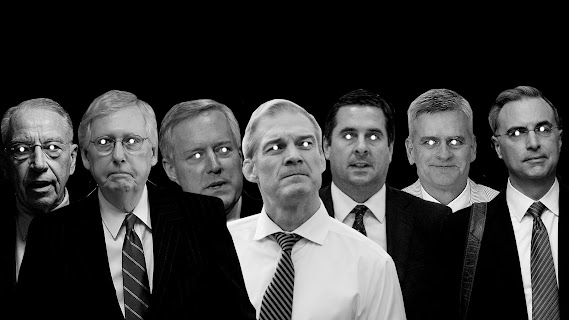 Members are encouraged to participate by selling the group's product to others. Practices and influence techniques include using guilt and shame, peer pressure, financial control, magical thinking, or guided imagery.

There's never been a more dangerous cult in our history where an ex-president is actively trying to overthrow our electoral system in order to seize power.

With half of America believing the 2020 election was stolen, we're facing a crisis unlike anything seen before in our history.

The only way to defeat Trump and his minions is to vote against them. Plucking Trump's enablers out of politics is going to take a lot of determination and participation at the polls.

In this time of America's identity crisis, we must not let Trump's cult flourish. We must defeat him and his cult followers for the sake of the nation.