Coming to a Theatre Near You Soon: MAGA World Godzilla vs King Ghidorah Fight for Control of GOP 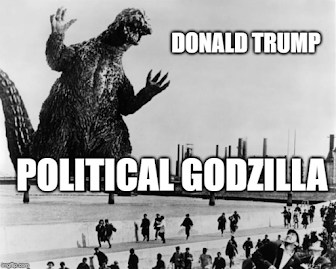 In this corner we have Trump aka Godzilla versus DeSantis aka King Ghidorah in the other corner.

The Republican party is in chaos right now after the Democrats kicked their asses in the recent election. The last thing they want to see is their two bigly leaders Trump and DeSantis waging war.

The gigantic grudge between the two hard-right heavies has already begun. Trump is jealous of DeSantis's popularity with the party, especially after his historic win in Florida. Worse yet, he won't kiss the ring and endorse Trump for re-election. The name calling has begun. 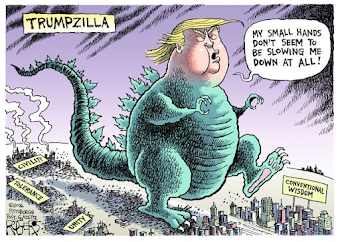 Scene One - Godzilla lumbers into Florida and confronts King Ghidorah who is holding a victory rally at The Villages.

Total panic! Seniors jumping out of their wheelchairs and running like they were teenagers in every direction as the two monster's clash.

The titanic struggle destroys homes and squashes Republican supporters like ants. Finally, Godzilla gets a nosebleed and backs off the battle and lumbers off to Mar-a-Lago with his tail between his legs.

Scene Two - The Republican National Party is in a panic. Members are divided between who they should support. Godzilla was their monster for six years but King Ghidorah, who by the way has three-heads, might be their future.

Movie stops here with a message, "Stay tuned for next installment."

So, what do you think? Who's going to win?

You're right. It's way too early to tell. The fun has just begun. I love all monster movies. Do you love monster movies that are drenched in toxic politics?

As it stands, I think we're all in for a treat! Get your popcorn ready and take a seat.

Are You Ready for National Happy Hour Day? 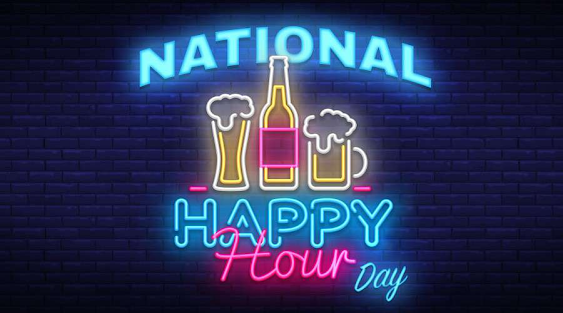 Be ready to lift your glasses of booze on November 12th to toast National Happy Hour Day. What a great idea you say!

You may be surprised to know that the holiday has quite the history dating back to 1900s when there were "Happy Hour" social clubs in some major cities.

The Happy Hour, as we know it today, got started in the early 1900s during the Mexican American war.

Bored reporters covering the war were desperate for copy. That was obvious when you read an article in the "Washington Times" on May 1, 1914, that had this lead,

After WW II came to an end Happy Hours were the thing. The relaxing practice had spread throughout the U.S. Navy.

It wasn't long before Happy Hours were a staple at bars across the country.

I'm sorry to report that I couldn't discover who actually gets credit for this alcoholic celebration. I'm guessing one of those Tar Heels was the creator of this salubrious holiday.

Veterans with PTSD Being Treated with Magic Mushrooms: Do They Really Help? 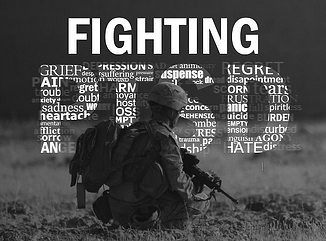 Veterans in Oregon who have PTSD can now participate in a U.S. Department of Veterans Affairs clinical trial that uses MDMA and psilocybin as treatments.

The two hallucinogenic drugs are also being used to treat addiction and other serious mental health issues.

Before going any further I'm going to turn the clock back to the 1970s when both of those drugs were readily available in California where I lived at the time.

I know it sounds cliche, but it seemed like everyone was using them and other great psychedelics like LSD. I certainly had my share of magic mushrooms, LSD, peyote, and other mind-addling drugs. None of them cured my yet to be diagnosed PTSD.

I'm a Vietnam veteran (1970). When I got out of the Army I went in search of sanity and serenity. I took psychedelic drugs hoping for deliverance every day at 3:00, but it never came to me.

The VA's newfound interest in hallucinogenic therapies seems funny to me. When I was going through an in-house counseling program for PTSD at Ft. Miley in San Francisco I had to go through a drug rehab segment because I smoked marijuana. Drugs were a Bozo no-no back in 1992.

There are now at least five studies to gain more insight into the now promising drugs, according to a report in The New York Times.

Research has shown therapeutic benefits, particularly for serious mental health conditions such as depression, addiction and anxiety, according to a study published in the peer-reviewed journal JAMA Psychiatry in 2020.

I suspect this new willingness to allow research has led to a push to study psychedelics as medicine for the nation's military veterans, whose challenges with mental illness has led to a suicide rate among vets that's higher than that of civilians.

I'm not endorsing the new treatments. But the hippie in me is like "Cool man!" I'm sharing this new approach with the hope it does help the men and women out there who need it.

As it stands, that marijuana they didn't want me to smoke back at Ft. Miley is now a permanent part of my PTSD treatment program.

Are You Looking Forward to the Holidays? 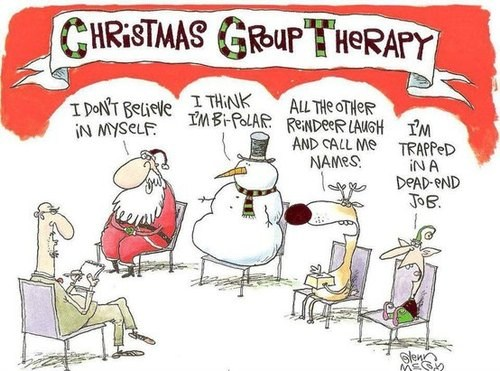 That time of year is nearly upon us.

With Thanksgiving on the horizon and all the religious holidays in December, it's time to consider your game plan for these festive events.

Or not. Take me for instance. I have no plans, nor do I intend on making any. You may call me a Grinch (or something worse) but I could care less. I quit holidays years ago after my kids and grandchildren grew up.

Holidays can be hell. The fact is more people get depressed around the country during the holidays than any other time of the year. So much for good cheer.

For years I felt like a hostage to toy, and digital device manufactures getting richer during the holidays, but there was no choice. The kids all expected presents. I couldn't disappoint them no matter what I thought about holidays being a rip-off.

I'm still convinced holiday gift-giving is a practice promoted by big corporations from Day One. I don't like the feeling of having to do anything (who does?) because of some cultural traditions promoted by greedy bastards laughing all the way to the bank.

To be clear, I like giving gifts to loved ones and friends randomly. It's fun, especially if you surprise someone.

Honestly, I don't care about holidays at this point in my life. I acknowledge them up to a point, so I don't look like a complete asshole, but I could do without them very easily.

Are you looking forward to the holidays?

I suspect most people do. That's okay. I'm not interested in converting people to be a grumpy old man like me! As a matter of fact, I hope your holiday season is wonderful.

Waiting to Exhale: Election Chaos is Almost Over. But Then the Real Battle Begins 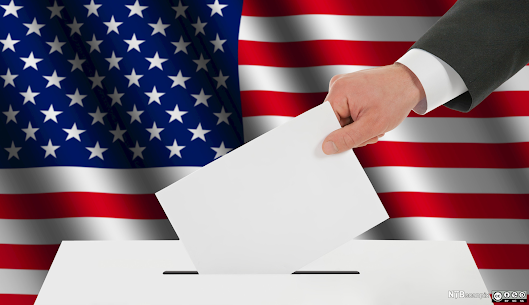 Like millions of other Americans, I'm exhausted with the midterms steady flow of lies and misinformation that has been polluting nearly every media source in the country.

Well, some relief is on the way.

Election day. No more polls. No more guessing and worrying about the results. No more talking heads predicting results. We should know the results tomorrow (in some cases it could be longer).

Republicans will whine and refuse to acknowledge the contests where they lose, and they'll gloat where they win. That's just the way it is. There are no adults running for office on the GOP side. Just Trump cult members.

I'd like to believe that tensions in the country will subside when the last vote is counted, but I know better.

There will be numerous frivolous challenges spewing from the election deniers who already said they won't accept the results unless they win. So what? Let them.

Go ahead and exhale anyway. You're going to need all of your intestinal fortitude for the next two years.

That's because we're going to face the most contentious presidential election in history, making the 2020 election look like a cakewalk!

There's little doubt that Trump is going to declare his intention to run for re-election. The country is going to be engulfed in more violence if Trump is indicted for all, or any, of the criminal cases lined up against him.

Trump's minions will get even more extreme as they watch their beloved leader facing convictions and possible jail time.

With 2020 as a blueprint for insurrection Republicans will have election deniers in various parts of our electoral system willing and ready to cheat the vote in 2024.

It's the potential for increased violence that troubles me. The midterms showed us that motivated Trump cult members are getting more violent, like attacking Nancy Pelosi's husband while searching for her in their own home.

I'm not in the business of predicting the future but certain things are more likely based upon research and common knowledge. I really hope my concerns for this country subside enough for me to enjoy life more.

The water glass is either half full, or empty. It depends on how you look at the world around you.

As it stands, recognizing challenges doesn't mean we have to be in a constant state of worry. Forewarned is forearmed.

'Tis the Season for Indictments 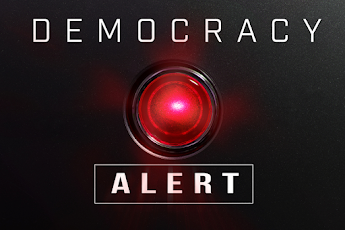 When the contentious midterms are over the real political firestorm will begin.

By all accounts Trump and many of his top minions are going to be indicted for their crimes this fall. By the time winter sets in the battle for democracy will be in full swing.

The Department of Justice has been patiently waiting to make any major moves in their dual cases against Trump before the midterms. That restriction will be gone with the wind and the shit will be ready to hit the fan.

Fulton County, Georgia AG Fani Willis and her investigation team having been putting all of the Trump ducks in a row and are ready to rock and roll! Political pundits believe that this case will be Trump's first criminal indictment but not his last.

A cautious Merrick Garland hasn't given any indication on when he intends to charge Trump and co-conspirators for their multiple crimes. The word around Washington is that criminal indictments might not come until early next year.

Then again, Garland may surprise everyone and give the country a Christmas present by indicting him before the end of December.

As the country uneasily moves from fall to winter it'll be the perfect season for indictments. Two years of investigations are coming to a close as accountability threatens Trump and his fascist acolytes.

The wheels of justice have been moving painfully slow because the courts have been flooded with frivolous appeal's designed to slow the whole process down.

As it stands, there's a time - or season - for everything. And we're entering that season with hope for justice and the preservation of our democracy.