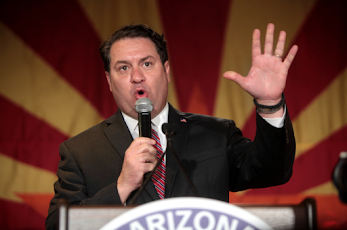 From 1478 to 1834 the Spanish Inquisition was established to combat heresy in Spain.

It was really just a method to consolidate power for the monarchy and church.

Inquisitor's traveled the country seeking out anyone who didn't support the Catholic Church and the monarchy.

Flash forward to the 21st Century in America.

Republican inquisitors are doing their best to destroy democracy and usher in an age that allows them to have complete control of state and federal government.

Like the Spanish inquisitor's, Republican operatives are going around to swing states to discredit their voting systems despite the fact that there was no fraud in any of them.

One of the leading inquisitors, Arizona Attorney general Mark Brnovich, is now on a crusade to discredit the 2020 election.

Brnovich took one case of ballot harvesting to the Supreme Court on his own. He admits no other state official joined him in his dubious effort to disrupt voting laws in Arizona.

Joining the Arizona State Senators who called for another audit of the 2020 election - a blatant scheme to sow discord among voters - Brnovich wrote an amicus brief supporting the Senate's attempt at creating chaos in the electoral system.

Like any good Trump zealot, Brnovich believes he's been divinely selected to carry Trump's message throughout the country.

"I really, honestly feel like I'm the right person at the right time to really push back against the results of the 2020 election. I've been preparing for this moment throughout my career," he gushed during a recent interview.

Inquisitor. Zealot. Trump minion. Brnovich is the man of the hour seeking to discredit democracy for a lower purpose - to create a fascist state.

Today's Not So Supreme Court Is Broken 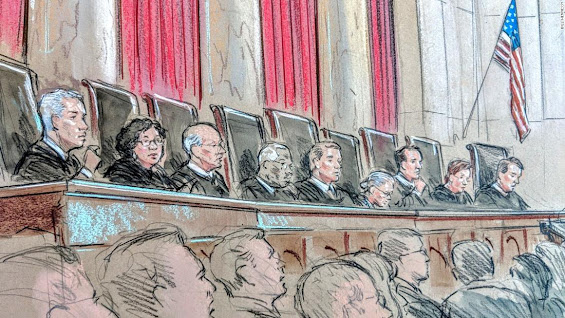 Don't expect justice from the highest court in the land anymore.

The once highly respected institution has become a weapon for right-wing Republicans.

It's no secret that six of the justices are conservative advocates opposing the other three liberal judges.

The court reeks of partisanship after three Trump judges were appointed during his corrupt administration.

We no longer hear how the justices respect each other's opinions, regardless of the case. There's a push from the right-wing side of the bench to question all past precedents that don't align with the current conservative court majority.

Justices are increasingly impugning their colleagues' motive and sincerity in a way that matches the current political climate.

The Supreme Court has officially entered an era where finger-pointing and personal accusations has become the new normal.

Despite that reality, the justices try to project a unified court where they all get along and believe each operates in good faith.

Alarmed by the current right-wing trend in her fellow jurists, Justice Sonia Sotomayor declared that a recent majority opinion authored by Justice Brett Kavanaugh was "fooling no one."

The public knows the court through its written opinions, and individual justices appear to be warning that some among them cannot be trusted to tell the truth or that they hold ulterior motives.

A survey, from the University of Pennsylvania's Annenberg Public Policy Center, found that more than half of Americans (57 percent) say that the Supreme Court can get too "mixed up in politics."

Needless to say the finding that half of Americans do not believe that Supreme Court justices set aside their personal beliefs in deciding cases is worrisome.

It also shows that justice is being perverted for political reasons, and our once proud institution is breaking away from its original mandate of "Justice for all."

The 'Big Lie' Is a Cash Cow For Extreme Republicans 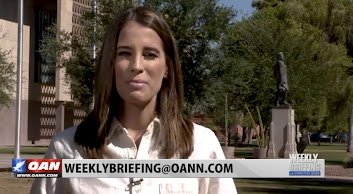 Lying has never been so profitable in politics before.

By adopting the Big Lie, radical Republicans find themselves on a roll, filling their coffers with small money donations from Trumpies far and wide.

Perhaps the most blatant of these fundraisers is the so-called Arizona Audit conducted by the state senate.

**One American News, a far-right TV station has exclusive access to the shambolic audit because two of it's reporters are fundraising for the audit.

**One of those reporters Christina Bobb is the network's most visible correspondent covering the "audit."

**The other reporter, Chanel Rion, OAN's White House correspondent, teamed up with Bobb and started a group called Voices and Votes.

**The group's website says that Voices and Votes is registered as a 501(C)(4) organization, meaning the donors will never be made public.

**The group is raising money for the company Cyber Ninjas, the firm running the audit and owned by a Trump supporter who believes the election was stolen.

**Reminder: This so-called audit is not an audit at all.

To put this all in perspective the Maricopa Country Board of Supervisors, which is majority Republicans, wrote a scathing letter to Arizona Senate President Karen Fann, calling the audit a threat to democracy and telling her to end it.

"The Arizona Senate is not acting in good faith, has no intention of learning anything about the November 2020 General Election, but is only interested in feeding the various festering conspiracy theories that fuel fundraising schemes of those pulling the strings. The result is the Arizona Senate is held up to ridicule in every corner of the globe and our democracy is imperiled," the board wrote.

There are many more examples of fundraising off the Big Lie.

Don't expect Republicans to change this corrupt fundraising tactic, because it's working.

Exposed: Nunes' Failed Attempt To Unmask a Critic With Help From Bill Barr 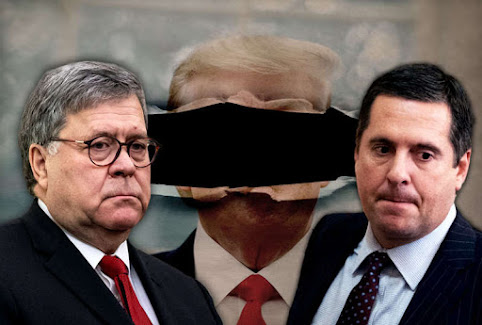 © Provided by Salon Bill Bar; Devin Nunes; Donald Trump
Rep. Devin Nunes is a traitor with thin skin.
He'll likely be remembered for one of the lamest political gambits in history - his infamous "Midnight Ride" to the White House.
What happened is Nunes heard a rumor that Obama was phone tapping Trump Tower. The rumor came from Trump himself.
The next day after his midnight ride to the White House to supposedly warn Trump, Nunes tweeted "Obama wire-tapped Trump Tower."
In a strange press conference later in the day Nunes claimed he had to run to Trump to tell him about the reported phone breech because it was his duty.
As the House Intelligence Committee chairman he worked diligently to sabotage any meaningful investigations into Trump's corrupt dealings with Russia during the 2016 campaign.
Without any sign of remorse for his attempt to squash the investigation, he lied about having any knowledge of calls between Trump's advisor Michael Flynn and Russian Ambassador Sergei Kislyak.
On Nunes thin skin
There were plenty of detractors who saw Nunes as a corrupt lackey of the president. Some of Nunes critics spent time on Twitter, calling him out for being a traitorous asshole.
A couple of those Twitter media detractors   irritated Nunes so much he tried to sue them - and lost.
So he turned to Bill Barr to go after the identity of @NunesAlt. The DOJ even went as far as to get a grand jury subpoena - a unique power that requires no judge to sign off - to demand that Twitter turn over the person's name.
The reason the case didn't go anywhere was that after Barr left the new AG, Merrick Garland, withdrew the subpoena.
Will there be repercussions for this blatant abuse of power? Not likely. His fellow Trumpies in Congress will cover his ass if an investigation is ever launched.
Nowadays Nunes is comparatively quiet, content to push the Big Lie and support his idol Trump.
at May 19, 2021 No comments:

The Biggest Threat To America Today 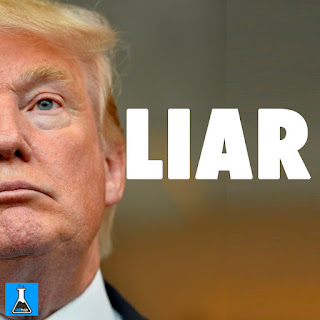 Russia is not the biggest threat America faces.

China is not the biggest threat to America.

Nor is North Korea.

Or any other hostile nation.

The biggest threat to our very way of life, our democracy, is coming from one man...

He's holding the Republican Party in thrall. So much so that eighty-percent believe in his Big Lie, and that Biden is not the current president.

It's a matter of reality, ideology, and an alternate universe clashing in the headlines every day.

No president has ever threatened our electoral system like Trump has, and is doing right now months after losing the 2020 election.

Rational Republicans are being canceled by radical Republicans who think Trump is some kind of god and deserves unswerving loyalty regardless of how much it hurts this country.

Far from accepting his loss, Trump continues to play his favorite hits: "They stole the election. Biden is not president, I am. Only I can save this country from becoming a communist nation. Blah, blah, blah."

Like a badger emerging from it's den, Trump is increasingly becoming more visible news wise.

His appearances thus far have been limited to interrupting his guests weddings at Mar-a-Lago and delivering an impromptu Stop the Steal rant.

That's going to change next month. Trump minions are hinting his highness will re-start his infamous rallies in mid to late June. 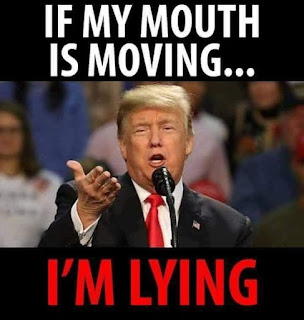 Trump's efforts to attack our democracy are ramping up as his minions seek to suppress voters in the upcoming 2022 mid terms.

Like termites they're eating away at the very foundations of our republic. Republican governors are signing voter suppression laws to ensure that the mid terms will be a lot harder to vote for democratic voters and independents.

In Trump's own words, "They're rigging the election."

A free and open election is the bedrock of our Constitution. We must always speak truth to the lies Trump tells. Democracy depends upon us all. 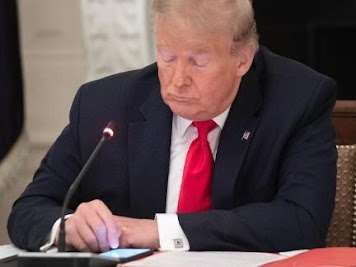 On November 9th, 2020, Trump tried to create havoc by issuing a secret order to withdraw troops from around the world.

The effect would have hurt and angered our allies - especially in Germany. Congress would have exploded in partisan accusations creating chaos at home.

Lucky for all of us, it didn't happen. Bit it was close. It was a case of a lame duck president intent on hurting the country that had booted him out of office.

The military establishment was aghast when word got out of Trump's intentions. It would have completely realigned our foreign relations.

Trump was determined to derail the election and no act was too low. His resistance culminated in a coup attempt at the Capitol on January 6th.

If high officials in the military hadn't intervened the United States would be paying the price today.

The Trump threat to democracy continues. He's torn the Republican Party into pieces with his Big Lie and plans on holding hate rallies again in June.

Until justice catches up to Trump in the many lawsuits against him, he'll be a thorn in our nation's side.