Not Quite ‘Beam Me Up Scotty’ Science But Still Sick

It looks like a skateboard mimicking a laptop computer on steroids, and it can transport you up to seven miles on a single charge.

Speaking of transporting…here’s a vintage moment:

"Beam me up, Scotty" is a catchphrase that made its way into popular culture from the science fiction television series Star Trek. It comes from the command Captain Kirk gives his chief engineer, Montgomery "Scotty" Scott, when he needs to be transported back to the Starship Enterprise. (Source)

BACK IN THE REAL WORLD

Japanese designers at Cocoa Motors, have created WalkCar, a tiny motorized transporter (Photo on top of page), small enough to fit in a bag, so that you can take it wherever you go.

To operate it, you just lean your body toward your destination and it moves with you, similar to a Segway. (Source) To see it in action, watch this video.

Oops! That was a mistake!

Mistakes - we all make them.

They range from being embarrassing, to downright deadly.

Walking down the information highway today, I discovered three good examples regarding how mistakes can affect our lives.

Let’s start of with this story:

An Arizona bounty hunter was booked after he and his team mistakenly raided the home of the Phoenix police chief while looking for a fugitive, authorities said.

Brent Farley, owner of NorthStar Fugitive Recovery in Mesa, along with members of his team and those from Colorado-based Delta One Tactical Recovery surrounded Chief Joseph Yahner's home late Tuesday night, police said.

Farley was charged with criminal trespassing and disorderly conduct.

Can you imagine how pissed off that police chief was? They woke him up in the middle of the night pounding on his door and shouting curses. He answered the door in his underwear and a police baton.

The Tampa Bay Buccaneers recently launched a website to attract female fans (Red) but I think it’s a big mistake.

You be the judge:

at the Bucs hope will change the way football is enjoyed by women.

This program’s kickoff party includes a few reasonable and non-insulting things such as an “Insider’s Talk” with General Manager Jason Licht, and some appearances by former Buccaneers.

But it quickly devolves into: “…gameday style tips from local area experts, and even a RED Lifestyle Lounge session to educate attendees on the art of incorporating their passion for the Bucs into their other lifestyle interests such as tailgating and home entertaining.”

So, in case you’re one of the female of the species in greater Tampa, who is looking for the right blend of Warren Sapp with a parrot on his shoulder and Martha Stewart for her home, they’ve got you covered.

They’re also here to help the ladies with technical football concepts like the “play clock,” since girls can’t possibly understand such subtle nuances of the game.

More than a 1,000 people die each day from a medical mistake.

It's a chilling reality – one often overlooked in annual mortality statistics: Preventable medical errors persist as the No. 3 killer in the U.S. – third only to heart disease and cancer – claiming the lives of some 400,000 people each year.

It's not just the 1,000 deaths per day that should be huge cause for alarm, there's also the 10,000 seriously complicated cases resulting from medical errors that occur each day.

No matter what sources you want to tout there’s no doubt that the USA leads the world in gun deaths.

You know why? We love guns.

Excerpt from Happiness is a Warm Gun by The Beatles

But guns aren’t really cuddly. The USA sets the standard for the pla Beyond the fact that we love our guns, here’s some more answers to a few questions you might have about guns and mass shootings, including:

They really didn’t do that….did they?

Barnum and Bailey would be proud.

The 2016 presidential election is already a 3-ring circus despite being over a year away.

We’ve got a ringmaster, Donald Trump, setting his GOP opponents on fire with his hair-blazing comments. In response, his opponents have been jumping through hoops to get their moment on center stage.

What a show. You won’t believe some of the antics thus far. As a matter of fact your first response will probably be, “They really didn’t do that…did they?”

In a minute-long video released Monday, the 44-year-old senator from Texas, decided not to address political issues.

"There are few things I enjoy more than, on weekends, cooking breakfast with the family. Of course in Texas, we cook bacon a little differently than most folks," he said over music that could have been from the opening of an action film.

The video then shows the conservative candidate wrapping a slice of bacon around the barrel of an assault rifle and covering it in aluminum foil before emptying two magazines in a barrage of shots fired at an indoor target.

"There's grease coming down," Cruz declares, satisfied that the gun has gotten hot enough to cook the bacon.

Sen. Rand Paul took a chainsaw to the tax code, literally. But even a slickly produced campaign video couldn’t cut through the frenzy over Donald Trump.

The Kentucky Republican released an edgy video Tuesday called “How would you kill the tax code?” Sporting a black “Detroit Republican” T-shirt, Paul talks about creating a one-page tax form with a 14.5% flat tax and destroying “all 70,000 pages” of the U.S. tax code.

Then, for dramatic effect, he sets stacks of paper on fire, shoves them in a wood-chipper and takes a chainsaw to them, while an electric guitar squeals the national anthem.

Graham is trolling Trump in a video for IJReview, a conservative news site.

Using fire, a toaster oven, a golf club, a cleaver, and other fun but totally unnecessary methods, he destroys a bunch of flip phones—and one unfortunate blender.

"Or if all else fails, you can always give your number to The Donald," Graham says in closing, before hurling one last phone off screen "for the veterans," a dig at Trump's attack on Sen. John McCain's time as prisoner of war.

Three examples are enough for now. If you’d like to add one, please let me know. I have a hunch there’s a whole slew of ridiculous stunts upcoming before this election is over.

3 Suggestions: You might as well smile, or better yet laugh! 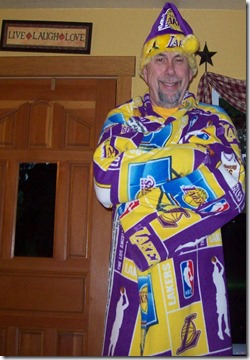 They defy us to smile. They’re in our face in the main stream media and the social media, dragging us down…and depressing us. If we let them.

First suggestion; take a chill pill and breath before surfing the net, TV, and talk show radio shows. Most of what you’re going to encounter is propaganda driven by corporations with special interests.

After you realize you have a choice – negative or positive - to make, you’re on the road to empowerment.

You can let all of these terrible things harsh your high daily if you get too serious about them. It’s one thing to recognize what’s happening in the world around you, and another to put it into perspective.

Be real. When your best friend dies, smiling isn’t on your mind. Perhaps later when you recall good memories laughter will come and help you to heal.

Second suggestion; seek your inner funny and start putting humorous spins on all of these terrible challenges. You can’t joke about everything…or can you? Laughter is the best medicine for combating what life throws at you – both in the media and your own personal life.

Third suggestion; because your not a god and you can’t do squat about most of these challenges, cut yourself some slack. Those personal challenges you face will get easier if you go at them in a positive manner.

Oh yeah…work on that smile so when someone tells you that Russia is going to attack any moment you can come back with a snappy reply like;

“Sarah Palin, the USA’s unofficial Russia-watcher, has assured President Obama that she can see Putin from her front porch and if any funny stuff goes on she’ll know it and warn us!”