Lighten up! How to beat back winter blues

Real life can be funnier than cartoons…

Here are some links that hopefully will find your funny bone…

According to the Daily Express...

A 67-year-old teacher who has been teaching for over 50 years has been banned from teaching because she touched a nine-year-old boy's arm. More on that story here.

This is what makes news in north-west Florida:

A north-west Floridian woman aged 19 has been charged with domestic battery after kicking her brother in the genitals. 'The brother said she scratched him, too.' (NWFdailynews.com)

All of these great links via Hubpages 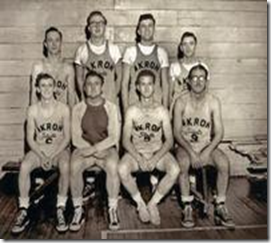 If there’s one sport I really love above all others, it’s basketball. I played most of my life until back surgery and injuries ended my hoop days.

The idea of a racist league like this in 2010 is really kinda scary. I’ve always enjoyed playing the game with people of all colors. I can’t imagine not playing with the best players regardless of their color. It bothers me because I’m seeing a trend since Obama took the presidency. We seem to be going backward on race issues. Now, we’re confronted with a blatant basketball league of white supremacists!

“A new professional basketball league called the All-American Basketball Alliance (AABA) sent out a press release on Sunday saying that it intends to start its inaugural season in June, with teams in 12 U.S. cities. However, the AABA is different from other sports leagues because only players who are “natural born United States citizens with both parents of Caucasian race are eligible to play in the league.”

Above Photo source: The Akron Silents, pictured here, were not known for their trash-talking.

When I miss a day, or two, of posting something on this blog I feel guilty. I get flashbacks to my days as a newspaper editor when there was no such thing as missing a publication date. Those days meant deadlines that had to be kept. And that was just with a weekly newspaper!

I’ve always admired a daily newspaper for the very fact that it has to come out everyday. Think about that. An  entire newspaper with four or five sections everyday. That’s a lot to read.

To NOT POST something on my daily blog seems like an abysmal act which will bring about dire consequences. No one will ever come back now. I’m sure. Those few odd ducks that have been visiting this blog daily are probably the only ones who noticed my breech in daily blog etiquette. To you I say, “We’re all human.” I can’t even make up a good excuse why I didn’t make a blog entry. Or two.

I prefer to say I tool a pause. That my mind was engaged in other pleasurable pursuits. Mindless things to be sure. Serious has to be set aside sometimes. Like a cracked bat, or worn-out old leather wallet. For my imagination to soar I have to shed serious like a sock with holes in it. Humor is my dopamine. My vial of crack. My Jack Daniels. It has a numbing effect on the harsh realities around me if I remember to tuck it into my back pocket and not sit on it.

This is the 21st Century and I’m a relic that remembers the days before there were cell phones for every man,women, and child across this nation. In my century, Buck Rogers was the only guy with gadgets like cell phones. It took a little longer for news to travel back then. The thought that we would one day be driving a car, while yakking or texting on a tiny phone simultaneously never even entered anyone’s mind in 1950 (the year I was born). Well, maybe it did in Buck Roger’s mind.

TO POST or NOT TO POST is the question. Should I set standards so high that I get a nosebleed? I don’t think I should. It seems to me I started this to have fun. Okay, and to help promote my column As It Stands. (Which sometimes makes me feel guilty). Am I messing with a good thing here? I guess if I stay away from putting advertising on this blog it’ll help keep things loose. This is a no censor zone. A no judgment zone. A zone where political rhetoric is ruthlessly rejected and made fun of. If you have a favorite political party that you pander too, this is not a good place to put up signs saying vote for ****** *** (fill in blanks).

I don’t roll with the pols. Apparently they’re a necessary evil in our silly system of supposed checks and balances – but that’s what we’re stuck with. Back to humor. It’s so easy to have fun prodding pols with zingers. They often provide them for you. But enough of this nonsense.

I have no idea why you’re still reading this…but thanks…and good night world.

Temple thought to belong to wife of king who ruled in 3rd century B.C.

“Egypt said Tuesday that its archaeologists have unearthed a Ptolemaic-era temple dating back more than 2,000 years, that may have been dedicated to the ancient cat goddess, Bastet.”

The ancient cat-goddess Bastet was found amongst the temple's ruins in the Kom el-Dekkah area of the Mediterranean port city of Alexandria.

It’s been 40 years (1970) since I was in Vietnam. For decades afterward, all I heard was terrible stories of the high cancer rates among the general population caused by the Agent Orange we sprayed everywhere.

Now it seems, that Vietnam has emerged as a growing economy with it’s own billionaires, despite being communist.

Big businessmen are now looked upon favorably by the government. The 21st Century has been good to this once impoverished country. Rhetoric has been replaced with capitalism (for all intents and purposes).

One of the flamboyant entrepreneurs making it big in booming Vietnam unveiled a massive precious stone on Monday that he plans to transform into the world's largest jade Buddha.

AP Photo – Buddhist monks look a the jade piece as it was unveiled today in Hai Duong province.

Poll: Getting rich seen as a long shot

Americans say job losses, too many bills keep them down

“The Great Recession seems to have pushed Americans into a negative mindset about their prospects for getting rich.

Seven out of 10 say it is harder to get rich in America today than it used to be, according to the most recent Bankrate.com survey conducted by Princeton Survey Research Associates International.”

Fog, and people who drive in it without headlights

Do you remember the 1980 horror movie called “The Fog?”

Anyone with Homichlophobia, or fear of fog, would probably rate it more horrifying than the thriller “Jaws.” Take my advice and don't see the 2005 remake of “The Fog” because it stinks!

There's a so-called “Ten Minute Cure” for Homichlophobia on the Internet. I don't advise anyone to take it seriously. Paying good money for a little CD that's supposed to cure your phobia is like taking a 10-minute home course in The Reproductive Biology of the mongoose and then writing a scholarly article for a prestigious wildlife journal based upon your new found knowledge.