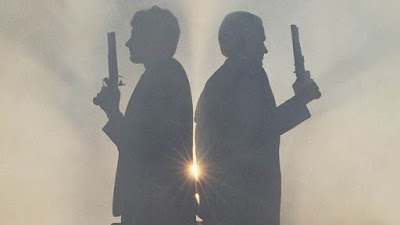 With just a couple of weeks to go until spring, two investigations are already blooming; one on Capitol Hill, and one in a district court.

Let's take a moment to look at them. There are more investigations going on, but these two are playing into a political drama that may affect the elections in November.

Senate Homeland Security and Government Affairs Committee Chairman, Ron Johnson, plans on forcing a committee vote on the first subpoena stemming from a probe tied to Hunter Biden and Burisma.

This move comes after Biden's ascendency in the Democratic polls this week. Johnson falsely claimed "...it wasn't a political probe."

It's a sure sign Trump is worried, and why he's activated his minions in the senate.

Despite being impeached for looking for dirt from a foreign country on Biden and his son, Trump and cronies are going to resurrect that bullshit story.

The hearing promises some high drama.

In a Federal District Court

The scolding was unusually blunt with Walton saying Barr made "misleading statements" to spin Mueller's report findings in favor of Trump. He went on to note Barr's "lack of candor," and "a calculated attempt" to influence public opinion.

In his ruling Walton said he needed to review the entire document because he could not trust the Justice Department!

The upshot could mean that the Mueller report will finally be released (with only a minimum of security redaction) to the public.

That should make for some nice reading this spring. 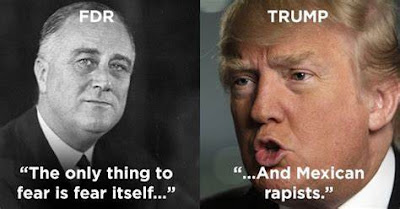 Some American presidents have turned out to be more suited for the office than others. They're names stand out for the great challenges they overcame.

Think Abraham Lincoln and his handling of a Civil War that threatened the very future of the nation.

Franklin Delano Roosevelt's policies were so popular he was a four-term president. American's trusted him through the tough war years and were comforted by his "Fireside chats."

John F. Kennedy avoided a nuclear war while still standing up to Russia at the height of the Cold War.

I'm sure an argument can be made for a couple of additions to this list. For the sake of brevity I'm stopping here however. What I'm leading up to is a comparison between those presidents and Trump.

As the nation stands at the threshold of a pandemic  Americans traditionally turn to their president for the confidence that everything is going to be alright.

The public wants transparency in a time of crisis. Instead we're stuck with a president who doesn't believe in basic science, and questions medical experts opinions.

Everyone knows why. Trump is trembling at the thought of what the coronavirus is doing to our economy. In his lizard brain a good economy will get him reelected. There's little else to run on.

So by downplaying a disease that's spreading from coast-to-coast, our conspiracist in charge is putting the country's safety aside in a single-minded pursuit to prop up his election chances.

Trump will be remembered by historians.

Not as a great president, but as the most corrupt president we've ever had! 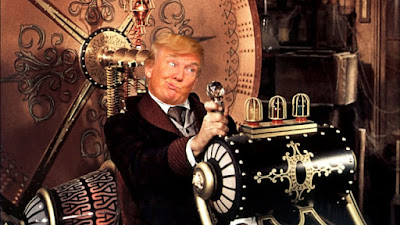 Trump and his Slime Machine in the Oval Office

Trump's biggest fear is starting to look like it's going to happen.

Joe Biden is back.

The last time Trump went after Biden he ended up getting impeached. Not that it taught Trump a lesson. Just the opposite.

He's been seething since his acquittal in the Senate, and has been busy on a revenge tour going after everyone involved.

In recent weeks Biden's campaign was looking weak because of Sanders surging campaign, and all of his competition for the moderate lane.

Trump wanted Sanders to win (and even encouraged followers to vote for him in the primaries), believing he'd make an easy target with his Democratic socialist tag.

That happy thought disappeared after Super Tuesday and it became apparent Biden was not only viable, but stood a good chance of getting the nomination.

Just hours after Biden surged to the top of the Democratic presidential pack Senate Republicans announced a new phase of their investigation targeting the former vice president, and his son Hunter.

Senate Homeland Security Committee Chairman Ron Johnson (remember his part in the Ukraine scandal?) told reporters he is likely to release an interim report within one to two months.

Following Trump's teachings, Johnson denied the obvious, claiming his investigation is not politically motivated and has nothing to do with Joe Biden.

House Democrats know how to play this game too. They're preparing to charge Republicans who probe the Burisma matter with aiding a potential Russian disinformation campaign.

Everyone - on both sides - knew this was going to be the mother of all nasty Presidential campaigns.

Bullshit detectors are available to everyone. Just Google fact-checking sights - like Snopes.com - if you're interested in the truth.

Biden Breaks Through: It's Down to Two Candidates 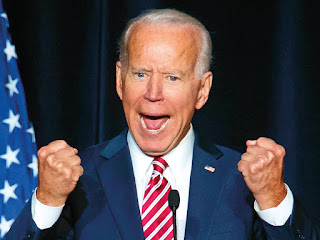 What a difference a few days can make. Prior to the South Carolina primary people were writing Joe Biden off.

Today it's a two-man race. Bernie Sanders and Joe Biden. After yesterdays results from Super Tuesday the field of candidates has narrowed dramatically.

Suddenly Bernie Sanders is not the front runner. Just like that. The delegate count is (as of 8 a.m. PST) Biden 453 delegates, to Sander's 382 (NOTE: votes are still coming in and it looks like Bernie will win big in California).

Elizabeth Warren has not dropped out of the race thus far, although she doesn't have a viable way forward. There's a chance she may still drop out today.

One thing is now crystal clear, the battle is now between the far left and moderates. Biden's momentum is growing. Endorsements are pouring in. When Bloomberg dropped out he endorsed Biden, which is huge.

The race is far from over. In the coming weeks expect a fierce competition for the remaining states.

Trump: Beware of March 31st. It Could Lead To The End of Your Presidency 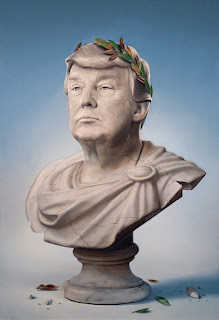 Soothsayers warned Julius Caesar that he should beware of the ides of March (15th) because it was going to be a bad day for him.

Our wannabe King is facing a possible bad day on March 31st. Three cases are going before the Supreme Court, any of which could spell the end of his presidency.

The other two cases were filed by House Democrats who want Trump's financial records from Mazars, Capitol One, and Deutsche Bank.

The Court will hear oral arguments for all three.

Trump's lawyers are claiming he has sweeping immunity from the criminal process while he's in office. In other words, they're saying he's above the law.

It's a weak argument that has been turned down by all the federal courts of appeal.

Here's the real scary part... if the Supreme Court with it's conservative majority decides to let Trump off the hook, the rule of law in America will no longer mean anything.

Rulings are not expected until around July.

Until then, Americans have to contend with an unhinged narcissist in charge who is busy conducting a revenge tour of non-loyalists in the government.

Of all the cases the Supreme Court takes up this year - these three will be the most consequential.

We'll either still have laws, or we won't as it applies to a corrupt president. 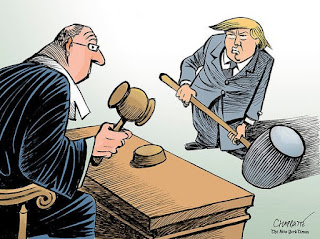 While political analysts and pundits are swooning over Super Tuesday, Trump will be hoping he gets the power to fire the federal government's "independent agency's" leadership in a case before the Supreme Court.

The case is Seila Law v. CFPB, which asks whether the president is allowed to fire the head of the Consumer Financial Protection Bureau (CFPB) at will.

Why is this an important case? I'm glad you asked.

First, there's a possibility the Court could use the lawsuit to strike down the entire CFPB. If that happens it would dismantle much of the infrastructure Congress built in response to the 2008 financial crisis.

Second, and more importantly, there's a greater chance that the Court will use the case to fundamentally alter the balance of power between the president and the federal government's "independent agencies."

Who/or what, is Seila Law, and why are they attacking the CFPB?

They're a law firm being investigated by the CFPB for allegedly engaging in unlawful acts or practices in the advertising, marketing, or sale of debt relief services.

Political analysts see the case as a Hail Mary attempt to end that investigation by having the entire agency conducting the investigation struck down.

While the outcome is unlikely, the Court's decision is likely to fundamentally rework the balance of power between Trump and various independent agencies.

The way the system currently works various federal officials, ranging from the CFPB director, to Federal Reserve governors, to members of the Federal Trade Commissioners, serve in independent agencies.

This gives the agency's leaders a certain amount of job security. Trump could fire them the way things are now, but only "for cause" or for "inefficiency, neglect of duty, or malfeasance in office."

Trump and his legal minions are hoping that he get's the ability to fire anyone for no apparent reason. Our reality show star president loves saying "you're fired!" because he thinks it makes him look tough.

I wish I could say I believe the Supreme Court will do the right thing, and quit enabling our pathetic excuse for commander in chief but, alas! I can't.

The Conservative majority seems to think Trump has NO LIMITS to his power. 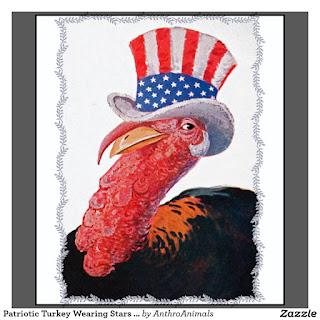 While smoking some intense ganja the other day with a Native American friend he shared some sacred insights into people's spirit animals.

Amazingly he could just look at a person, listen to them for a little bit, and then discern their spirit animal.

For the record, spirit animals are associated with age-old traditions, as well as shamanic beliefs, which teaches us to be closer to nature.

I decided to challenge him and asked him about current lawmakers in Congress.

Here is what he shared

Trump's spirit animal is a cross between a jackass and a loon. A Jackaloon.

Jim Jordan's spirit animal is a coyote on steroids. 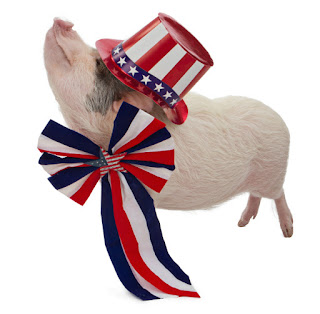 We talked late into the night and burned bowls by the campfire while he pointed out constellations and revealed that...

he was a Democrat!