The last thing I want to see is Biden's agenda derailed in the first 100 days of his administration like Obama's was.

Like Obama, Biden wants to see partisan legislation so that Congress can get things done.

The problem is, Obama was stonewalled at every turn by Mitch McConnell, until he had to resort to executive actions to get any legislation through.

Despite losing his majority in the Senate, McConnell still has enough power to thwart Biden's efforts at passing bills.

The 50-50 situation in the Senate has settled into a boycott where McConnell is demanding the Democrats agree not to do away with the filibuster rule.

As of this post the Senate is in an ugly limbo, where Republicans are still heading some committee chairs until the new Congress comes up with a plan to work together.

McConnell held Obama hostage, and he's trying to do the same with Biden.

So what's the answer?

If McConnell continues to insist on getting his way - despite being the minority leader - Schumer should move to invoke the Nuclear Option (a parliamentary procedure) that allows the majority to overturn a standing rule of the Senate, such as the 60-vote rule to close debate, by a simple majority of 51 votes.

And, of course, there's always the last ditch option of doing away with the filibuster rule entirely.

Biden inherited a nation in chaos and the only way out of the many challenges is to pass meaningful legislation.

If McConnell and the Republicans want to play power games, then the Democrats should push back harder.

Unity is a great thing, but when you have a party of obstructionism action has to be taken in order for progress to be made.

In a time when civil rights are still contested America has lost one of the greatest players in baseball history who used his platform to champion civil rights.

Hammering Hank Aaron broke Babe Ruth's all-time home run record and he lived life as an ambassador to the game. He was 86 years-old.

Aaron's incredible achievement came in the shadow of hate and death threats from people who did not want a black man to claim such an important record.

Long before Black Lives Matter came on the scene Henry Louis "Hank" Aaron was advocating for equal rights for all.

He went through hell after breaking the record and was taunted daily at ballparks. He received death threats on his life and was sent thousands of racist hate mail.

Hank once said he didn't read them, but saved some for posterity.

As Black Americans continue to fight for their place in society, it's important to remember a man  like Hank. He had little or no support for taking his brave stance on equality.

That didn't matter. He kept on with his advocacy long after he retired. As a matter of fact, right up until his last day on earth.

President Biden began his first hour in office yesterday by targeting COVID-19 with a mask mandate for federal properties.

It was followed by a slew of executive orders overturning Trump's years of damage.

It was a start.

Many battles lie ahead to make Americans safe from the deadliest pandemic in over a 100 years. Challenges from anti-vaxxers, aka flat earthers, will make it a harder fight.

The Biden team has their work cut out for them overcoming the lies spread by Trump minions that were attached to real scientists on the team.

Trump's flat earthers - are gone but the damage lingers.

Americans have to become reacquainted with reality. Science needs to become respected again - not mocked by political morons in positions of power.

Health experts worldwide state that face masks must be worn to in order to fight the spread of COVID-19, and it's evolving variants (up to five now).

The good news is we have a president and administration that understands how important face masks are in combating the spread of the coronavirus.

From Biden on down, they'll be modeling the wearing of face masks as a patriotic thing to do. Leading by example is the best form of leadership.

As for the other flat earthers Trump embedded into government agencies - like the EPA - they'll need to be weeded out and replaced with scientists - not political cronies who thrive on conspiracies.

The day is finally here.

After four years of chaos and corruption America is turning over a new leaf.

His presidency challenged our democracy at every turn.

His policies were acts of carnage designed to benefit his wealthy friends. He's already become a dark footnote in the America story.

It's exciting having a president whose not the biggest liar on the planet. Our allies are rejoicing today. Normalcy will be restored as Biden reconnects the connections Trump severed during his ruinous reign.

Biden faces more challenges than any other president - with the exception of Abraham Lincoln. He's inherited a pandemic, a weak economy, and a country nearly as divided as Lincoln faced.

It's not going to be easy, but if anyone can start uniting Americans again, it's Joe.

Our democracy is now on the road to healing.

As Trump slithers out of the White House for the last time - hours before Joe Biden's inauguration on Jan. 20th at noon - his churlish exit will be a final footnote in what has been the worst presidency in American history.

Trump's four-year reign of corruption can be called many things:

He's leaving office without recognizing the next president of the United States like a spoiled child confronted with a reality he can't accept.

He trampled on every aspect of the traditionally peaceful transition of power (for 150 years), by putting up as many obstacles as he and his minions could come up with to hinder a smooth transfer.

He led a failed coup attempt against our elected lawmakers inside of the nation's capitol. Five died in the resulting riot.

He's been impeached twice, an indignity no other American president ever suffered.

Throughout Trump's reign he encouraged white supremacists by subtly siding with them.

His hate for minorities resulted in hundreds of Hispanic children being separated from their parents at the border - causing permanent mental harm to some.

He divided our nation into Red States and Blue States, waging war on Democratic governors.

He lied to every American when he said the coronavirus will just "go away" someday and then tried to hide how serious the spread was with more lies.

The sheer volume of Trump's lies - over 20,000 documented - made him the Biggest Liar in our political history.

The above are some of Trump's legacies.

There were many other assaults on our democracy during his ruinous reign that scholars will be documenting for years to come.

The British beat us to it.

The infamous Donald Trump baby blimp has found a permanent home in a London museum. I'm really bummed that they beat us to the punch.

The iconic 20-foot-high inflatable became a symbol of defiance since it first flew over London when Trump came to visit in 2018.

I watched with delight as Baby Trump went on a world-wide tour giving citizens of every country a look at the angry orange diaper-clad infant made in Trump's image.

The museum's director, Sharon Ament told Newsweek that the Trump blimp was a shining example of political satire. She expressed the hope that future generations will understand that the blimp was a symbol of resistance to Trump's regime.

Trump wanted his place in history. Well now he has it.

Parting will be such a pleasure...

watching Trump being trotted out (thrown out, drug out forcibly, violently expelled, or escorted by a police dog pulling on a leash around his neck) from the White House next Wednesday. 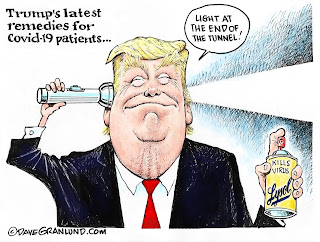 It's a miracle democracy survived four years of Trump's best efforts to destroy it.

His constant discrediting of science led us to where we are in the COVID-19 battle - the MOST CASES IN THE WORLD.

Americans are now looking to Biden for a coordinated plan to help ALL THE STATES (not Red or Blue states) administer a rapid and safe vaccine infrastructure. 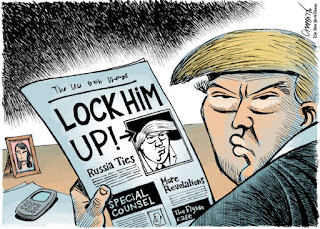 at noon, Trump is OPEN GAME for hundreds of lawsuits, including a felony charge from the New York AG of cheating the IRS.

I'm amused at watching Trump minions jump ship as he belly flops his final days away feeling sorry for himself.

I just received an alert that there's a video of Trump being dragged from The White House... early?

America isn't going to miss you a bit. Okay. With the exception of the hardened cult followers who've been forced to retreat to their caves and parents basements because Big Tech got tired of their lies and pulled their hate platforms.