Turkeys Took over TV: Why did we let it happen folks? 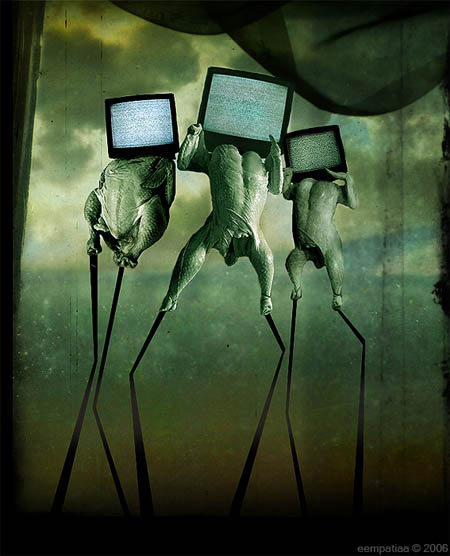 You may have noticed.

Turkey’s are running and programing TV programs throughout the country.

All TV programs. From the news full of views, to rednecks catching big ugly fish with their fists, there’s been a movement afoot. Turkey scratchings showing senseless images of people doing stupid things.

Somehow, rafters of turkeys have consolidated their clueless agendas into our lives while we sat drooling in front of the vast panorama of boob tubes stretched across the country.

It was bound to happen. Minds were turned to mush the moment the American family gathered around little oval screens in huge cabinets and watched blurry black-and-white images of commercials selling Alka Seltzer and Ipana tooth paste.

The turkeys don’t have limits. Nothing is too half-baked, or raw, to make a hit series. No amount of shows humiliating fat people, little people, or just plain stupid people (I’m thinking “Jackass”) seems to be enough. There’s constantly new shows coming out trying to butter up an increasingly jaded public.

As It Stands, the final irony is we have met the turkeys…and they are us! Gobble, gobble, gobble…

Posted by ImBlogCrazy at 9:33 PM