Why drink coffee for caffeine when you can inhale it instead? 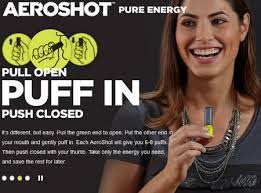 I just got off the phone with ex president Bill Clinton and told him it’s okay to inhale now. I want to share this interesting new product with you too:

“U.S. Food and Drug Administration officials plan to investigate whether inhalable caffeine sold in lipstick-sized canisters is safe for consumers and if its manufacturer was right to brand it as a dietary supplement.

AeroShot went on the market late last month in Massachusetts and New York, and it's also available in France. Consumers put one end of the canister in their mouths and breathe in, releasing a fine powder that dissolves almost instantly. Each grey-and-yellow plastic canister contains B vitamins, plus 100 milligrams of caffeine powder, about the equivalent of the caffeine in a large cup of coffee.” (Source)

Posted by ImBlogCrazy at 4:03 PM