Whose the Winner? Iran, or USA in Nuke Deal?

When America and Iran agreed on the framework of a deal regarding the use of nuclear energy who emerged victorious?

Should American’s be stomping their feet in approval? Do the Iranians feel like they pulled a fast one on stupid Westerners? Or, is it the perfect deal where both sides are happy with the result?

And while I’m asking questions, what was the real result of this political breakthrough with our sworn enemy?

President Obama has been confronted with skepticism and hostility by Republicans in Congress who say that he's being conned by Iran. Expect to hear from them next week.

Obama contends the inspections – which are part of the deal - are the toughest in history.

"If Iran cheats, the world will know it. If we see something suspicious, we will inspect it," Obama told reporters. "So this will be a long-term deal that addresses each path to a potential Iranian nuclear bomb."

Translation: We’re not going to let them build a nuclear bomb. Iran is supposed to be okay with that in exchange for the US dropping economic sanctions that have been crippling the country.

It all sounds very simple. So, why do I suspect there’s another story that’s not being told concerning this “historic” arrangement/framework?

Back when I was a teenager, The Rolling Stones were in the vanguard of the British Invasion of bands that became popular in America in 1964–65.

This year marks 53 years of continuous entertainment provided by the original “Bad Boys” of rock. Keith Richards and Mick Jagger are considered legends in the industry.

Their first international number 1 hit was "(I Can't Get No) Satisfaction", recorded in May 1965 during the band's third North American tour. "Paint It, Black" is one of my favorite songs of theirs.

I have to admit that I’m amazed at the “Stones” staying power. The fact that they are appreciated by generations of new young fans is proof enough of their greatness.

North America this year. This is the first time the band will have toured in North America since 2005-07's "A Bigger Bang Tour."

In addition, a re-mastered edition of 1971's "Sticky Fingers" album will be released May 26.

Conservative Christians: ‘Relax, No One’s After You in America’

There are countries in this world – Pakistan for instance – where it’s not safe to be a Christian. Christians are marginalized and treated like criminals across the middle east.

When I see a law passed that pretends to defend the Christian faith by rationalizing injustice against people that are not approved of by the church, the hypocrisy sickens me. Somehow, I don’t see Jesus as being that judgmental.

When Indiana’s Gov. Mike Pence signed the so-called Religious Freedom Restoration Act he effectively sent out the wrong message to the world, “Indiana is NOT an all inclusive state welcoming everyone – just the opposite!”

The new law has the potential to undo decades of progress toward greater equality.

Social conservatives say their fight to preserve their beliefs is to protect what they say is religious freedom, arguing that Christians or people of other faiths who oppose same-sex unions should not be required to take actions that could be seen as condoning gay marriage.

"Christian businesses and individuals deserve protection from those who support homosexual marriages and those who support government recognition and approval of gender identity (men who dress as women)," reads a message praising the new law on the website of the Indiana group Advance America, whose executive

Pence and Indiana lawmakers rejected the idea of inserting provisions into the law that would have specifically added protections for people who are gay.

The interstate backlash to Indiana's new religious freedom law is growing even as state lawmakers move to clarify the legislation, with Seattle Mayor Ed Murray vowing to issue an executive order this week banning city workers from taxpayer-funded travel to the state.

The Seattle mayor's statement is the latest boycott threat to emerge over claims that the law has the potential to discriminate against gays and others.

MORE ON THE SUBJECT

What the 'religious freedom' law really means for Indiana

Indiana law: Does freedom of religion mean freedom to discriminate?

One last thought: If Christians can get away with discriminating against the LGBT community because it goes against their religion, what about the other religions, and their laws? Like Sharia Law. Muslims who don’t want to obey the secular laws in our country could fall back on this new law. 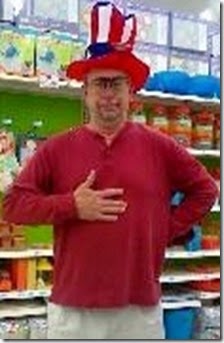 I’m truly honored to accept the Independent Party’s nomination for President of the United States.

It’s not every day an old Vietnam veteran with PTSD is picked to lead the country. One of the first things I’m going to do is legalize marijuana. My VP, Tommy Chong, will be the point person for that process.

Send any donations for my campaign to my personal PO Box in southern Oregon.

If you want to get into the spirit of the day check out:

The Top 100 April Fool’s Day Hoaxes of All Time

If your curious about the origins of such a silly day then go here and get the full story.

Meanwhile, why not take a peek at April Fools' Day 2015: The best spoofs and pranks, in pictures

It’s about time a woman has cast (or will soon) a hat into the GOP primary for president.

Here’s 3 things you should know about her:

1) The Los Angeles Times noted that Fiorina has conservative positions on certain social issues. She personally opposed abortion and, as a private citizen, stated that she voted for Proposition 8, which defined marriage as a union between one man and one woman, overturning a court ruling that same-sex couples had a right to marry.

2) Fiorina has called climate change a "serious issue" but claimed that the science surrounding global warming is inconclusive, saying "I think we should have the courage to examine the science on an ongoing basis."

She also accepted large contributions from the coal industry as well as Koch Industries and opposed the cap and trade legislation supported by Boxer.

3) In 2008, Fiorina worked for Senator John McCain's presidential campaign. On September 3, 2008, Fiorina defended the selection of Sarah Palin as McCain's running mate. Yet, in response to questions about her during a radio interview, she stated that Palin lacks the experience to run a major company like Hewlett-Packard, "…but that's not what she's running for.”

Running a corporation is a different set of things." Fiorina later amended her comment, stating that none of the candidates on either ticket had the experience to run a major corporation.

That’s about it. A mixed bag to be sure. There’s certainly very little buzz about her right now. Perhaps by the time she announces her candidacy we’ll get an opportunity to learn more about what she currently stands for.

Based upon her past politics and corporation ties, I think it’s apparent she’s already sleeping with such luminaries as the Koch brothers; which doesn’t speak well for her character, or intentions.

No Regrets About Stigmatizing LGBT Community

Religious tolerance is an oxymoron in Indiana.

Organized religion there is not tolerant.

Pence said he was proud of the law and "absolutely" did not think it was a mistake to sign it.

Critics have spoken out against Indiana's Religious Freedom Restoration Act since Pence signed it, but he stubbornly claims he’s protecting people's religious freedoms.

Pence tells his critics that the new law was not intended to make it easier for people to discriminate against same-sex couples. Yet, what happened when he was questioned by a reporter?

Asked repeatedly whether the new law would make it legal for a merchant — a wedding florist, for instance — to refuse service to gay couples, Pence declined to answer yes or no.

As far as I’m concerned that’s a cowardly yes, by remaining silent. How else can a logical person take that kind of response?

Which is why Pence’s claims ring false.

This law doesn’t strengthen the foundation of our constitutional First Amendment rights. It threatens to stigmatize a segment of our society by not treating everyone equally.

There’s been no threat to our religious freedoms in recent years that require a new law to protect them. We can still worship whatever entity we wish without fear of persecution, as per the 1st Amendment.

For the record, The First Amendment guarantees freedoms concerning religion, expression, assembly, and the right to petition. It doesn’t say anything about stigmatizing a section of the population.

In response to the new law Angie's List CEO Bill Oesterle said it has caused his company to put on hold an expansion of the company's headquarters in Indianapolis.

Time for me o walk on down the road…

Your poop can yield gold and other precious metals

Researchers have been playing with poop lately and they think they’ve struck it rich.

Instead of flushing millions down the toilet, humans could be mining their poop for gold!

That's at least what some researchers with the U.S. Geological Survey (USGS) think. They're looking for ways to squeeze metals like gold and silver out of solid waste.

When poop arrives at a wastewater treatment plant, it is separated into biosolids and treated water. Inevitably about half of the biosolids (3.5 million tons in the United States alone) is sent to landfills or incinerated, while the other half is used as fertilizer. [The Poop on Pooping: 5 Misconceptions Explained]

Kathleen Smith, a USGS geologist, thinks people could make more of these biosolids; they're full of tiny particles of metals that find their way into waste through beauty products, detergents and even odor-resistant clothing.

There are two good reasons to try to pull these metals out of poop, according to Smith, who's presenting her research on the subject at an American Chemical Society meeting this week. (Condensed version – read full story here)