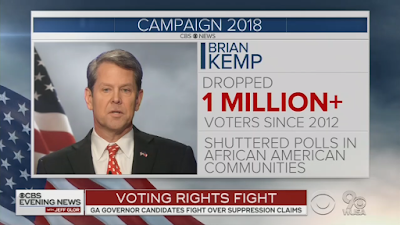 This election season voter suppression award goes to the state of Georgia.

Secretary of State Brian Kemp has done everything possible to rig the election by suppressing voter's rights, but at the last minute a judge ruled against him.

The judge then ordered Kemp to establish additional procedures to guarantee that voters flagged by the state as potential noncitizens can vote in the 2018 election if they can prove their citizenship.

Kemp had 53,000 potential voters sitting on his desk and refused to release them until the court forced him to.

Georgia's nasty gubernatorial race between Kemp (yes, surprise! He's also the Republican candidate) and Democrat Stacy Abrams, has centered around his efforts to suppress the black vote. About 70  percent of the voters are black.

With Trump leading the way, these midterms have turned into a horror show of spectacular proportions. The Republican party has elected to go long with Trump's divisive rhetoric and lies.

In desperation, Trump has brought out the Big Lie about immigrants from South America. The same hateful lie he campaigned on. Hispanics are murdering rapists trying to invade our country.

In a really deplorable stunt, our liar in chief has ordered 15,000 active duty troops to stop the "invasion." That's more troops than we have in Afghanistan.

His blatant lies about crazed MS-13 members and middle eastern terrorists controlling the group have been exposed...but he keeps repeating them...rally after rally.

Three more days. Are you ready to vote? Let's look at the bright side.

In four more days voting will take place and that avalanche of political ads will cease.

These midterm elections, driven by senseless fears, have already made history as the nastiest midterms ever.

Fueled by Trump's lies about a group of refugees and immigrants coming from Honduras to invade America, this ad makes the infamous Willie Horton ad look tame. It's a vicious assault based upon lies and conservative propaganda.

Trump and his surrogates are savagely waging a racial warfare between attempted bombings of prominent Democrats and Trump critics, and the Pittsburg synagogue massacre.

Trumpanzees at Fox News and social media web sites like Breitbart are reliable echo chambers for every baseless claim our liar in chief makes.

Then there's Trump's base. This particular group of people live in a bubble where Trump is viewed as a savior because he attacks liberals and tells them things they like to hear...regardless of how racist or hateful the stories are.

In the bubble, Trump can act like the anti Christ and still be hailed as God's servant by the alt-right evangelicals who ignore his sins here on earth in order to further draconian laws against women's right of choice regarding their bodies.

Hate rides the winds this Fall as America prepares to turn out for what may be our most vicious midterm election in history.

When the dust settles, we'll find out if there's hope of reining in Trump and his minions with a Democratic majority House.

If you haven't already pre-voted, please...vote on Election Day. Democracy is counting on you.

Surviving a Season of Fear in America 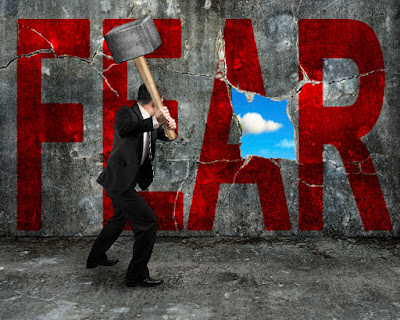 With midterm madness covering us like a burial shroud, the political winds carry the seeds of fear across the country.

Our liar in chief - a known fear monger - has set the tone for the nastiest midterms in history. His fellow racists and Congressional stooges set up a fantasy invasion of America to gin up support before voting day.

Because Trump uses fear to fuel his base, his bullshit stories, false claims, and outright lies about immigrants, are resonating among conservatives, radical supporters like the KKK, white supremacists, and Sean Hannity from Fox News.

The sad thing is many Americans are fearful of the "caravan" and equate it to an invasion thanks to listening to the alt-right haters with megaphones like Trump.

Like Aristotle said, "He who has overcome his fears will truly be free."

In order to restore the freedoms disappearing under Trump's regime, the House has to flip back to the Democrats who'll hold him accountable for his crimes as a citizen and as the president of the United States.

I predict we'll survive this season of fear and raging hatred...at least, until the next election comes in 2020. 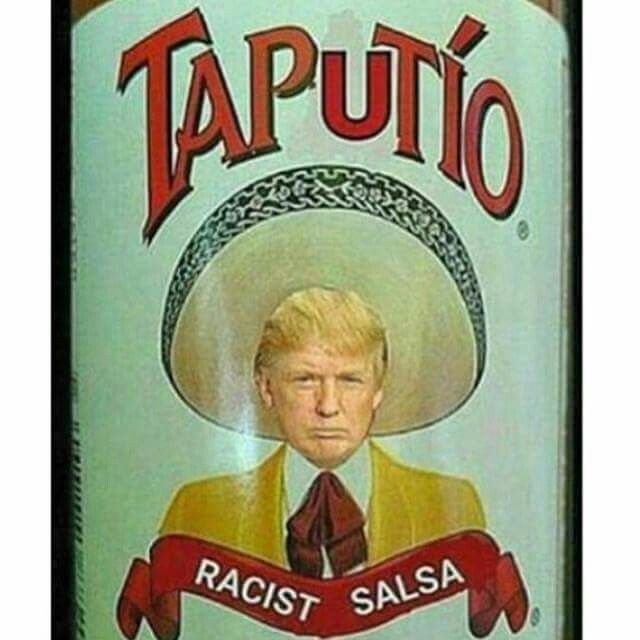 It's good to be back.

It was nice taking a break, but now it's time to take a look at last minute shenanigans that Trump has trotted out for the midterms.

It's all about that base. Anything for the base.

To that end, he's using scare tactics on steroids. Trump knows his base is fearful of Hispanics invading our southern border at any time...because he told them they would if he didn't stop them.

Just to show he means business six days before the elections, Trump is sending 5,000 active duty soldiers to the border to reinforce the 2,000 border patrol agents already on duty there.

Why? Because a caravan of 3,500 refugees from Honduras are going to arrive here and seek asylum. They should be at our border in about two months. So why are 5,000 military men and women being immediately dispatched there?

Why would Trump suddenly order more military personnel to the US southwest that he has serving in some of the world's most contentious combat zones?

Will Fischer, a former Marine who now works for the VoteVets, a progressive veteran's organization knows why:

In an interview with CNN, Fischer said, "Donald Trump thinks unarmed people who are fleeing horrors and are still 1,000 miles away are a national security threat a week before election day. I don't think so. It's a political ploy to blow up the embers of racism and nativism by using the military again as a political prop to advance his own agenda."

I have to agree. Trump's little "Operation Faithful Patriot" (how ironic that name is) is a load of bullshit served up in time for November 6.

Fischer and other veterans point to the unknown cost to taxpayers, given that much smaller deployments of National Guard to the border have cost hundreds of millions of dollars.

They also question the cost the military will bear, as the operation pulls troops away from training, other missions and their families. And then, they say, there's the murky legality of the mission, its scope and its purpose.

Just in case that's not enough red meat for his base, he's promising to defile the Constitution by destroying the 14th Amendment.

It didn't take him long to make a direct attack against our Constitution...just in time for the elections.

It's not going to be easy, but if the Democrats take back the House it's a strong first step at curbing our hater in chief.