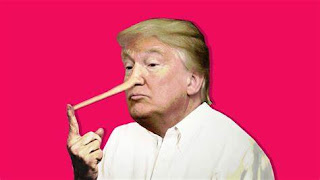 The pushback against Trump's "Big Lie" is picking up steam in some swing states.

Arizona's Democratic secretary of state calls for investigation of Trump, Giuliani and others 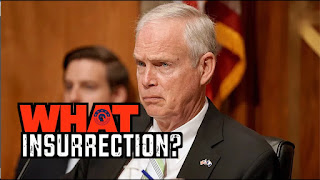 Trump's Big Lie is Getting Supercharged by 2022 GOP Candidates

For the sake of brevity I've only selected some recent articles/video that apply to today's topic.

As you can see, democracy is in peril with a rogue former president trying to destroy our electoral system. But, there is resistance against The Big Lie - and that's not going away soon.

McMafia Law and Trump: The UK Looking at 'The Donald's Money Laundering Grift 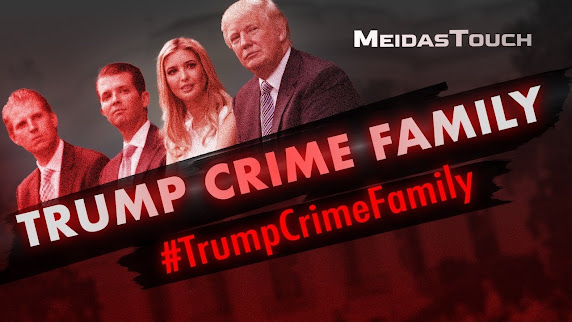 Despite having two golf courses - Turnberry and Aberdeenshire, Trump hasn't paid taxes on either of them.

That's changed. The International Trump Crime Family could be in big trouble with the British government under "The Unexplained Wealth Order" in the near future.

A U.S.-based nonprofit Avaaz, an online activist network, filed a court action to press the Scottish government to wield its popularly known "McMafia" law to force Trump to reveal the mysterious sources for his all-cash purchases and development of his two golf resorts.

Despite years of concerns about the properties, Parliament voted, 89 to 32, in February against a Scottish Green Party motion to force Trump to reveal his cash sources.

Despite that, First Minister Nicola Sturgeon said she won't protect the former president if wrongdoing is found.

Avaaz filed another petition in Scotland's highest civil court this week seeking a judicial review of the government's decision not to pursue the McMafia Law against Trump's businesses.

Also this week, there's been speculation that the golf resorts are part of a money laundering operation.

Neither resort has ever made a profit - despite the millions Trump has pumped into them. To rub salt into the wound, the resorts collected about $800,000 in COVID-19 subsidies from British taxpayers.

Allen Weisselberg, Trump's CFO, is no longer the director and controller of Trump International Golf Club Organization as of yesterday.

He was terminated from the United Kingdom registry of private companies after his criminal indictment in Manhattan.

The parallels and connections between the New York investigation, and the Scotland investigation can't be ignored. "Teflon Don" Trump is in big trouble.

I can't help recalling another "Teflon Don" John Gotti, who was eventually brought to justice and sentenced to life imprisonment.

Predator Politicians in a Star Wars Bar and More 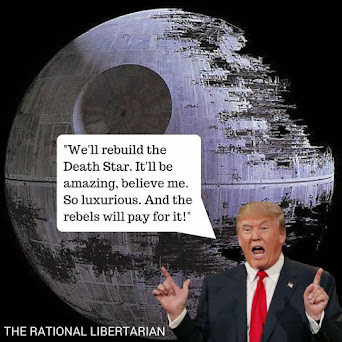 The image of Trump in the White House with a daily collection of freaks and partisan puppets besmirching democracy is... riveting. 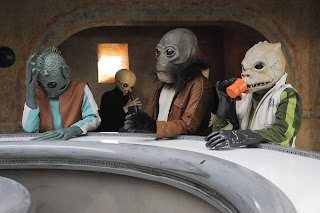 Rumor was that White House aides called the Oval Office and adjoining room, a "Star Wars Bar," because of how weird it was watching the daily display of characters slither in-and-out.

New books are coming out daily about the Trump administration, and very few are flattering.

Testimony - after testimony - paints a picture of a dangerous narcissistic sociopath banging around the White House like a pissed-off 5th grader who didn't get a hamburger for lunch.

His minions are struggling now that they are out-of-power. Most are having trouble finding new jobs. Some have landed at right-wing media outlets allowing them to continue worshipping Trump by telling lies on his behalf. 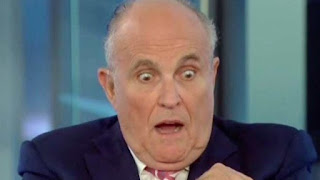 In particular, Rudy Giuliani, who is paying the price for lying for Trump.

A New York court suspended Rudy from the New York Bar on June 24th for his "false and misleading" statements on behalf of Trump.

Yesterday, the District of Columbia suspended Trump's most prominent attorney from practicing law in the nation's capitol. And Rudy's worries are far from over.

He's also being sued by Dominion Computer Systems for making false accusations of voter fraud that defamed the company after the 2020 election.

In addition, Rudy has to worry about the FBI investigation on him for his involvement with the Ukraine while lobbying for the Trump campaign on behalf of foreign interests.

Finally, there's another Justice Department investigation about possible illegal lobbying that he performed for Turkish clients.

As amused as I am by the Star Wars analogy, I have another updated one that I'd like to see:

Orange-clad Trump minions (plus Family) and his Orangeness breaking rocks in a chain-gang somewhere deep in Georgia during a heat wave.

Trump's Online Presence Has Been Laughable Since Losing the 2020 Election 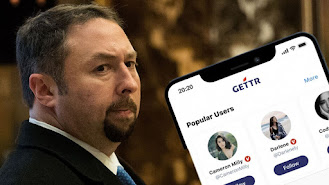 You can be excused if you don't recall Trump's ill-fated attempt at having his own blog.

It went kaput after one month.

The reason why was simple - it didn't get any traffic worth mentioning. It was a clunky blog with no interactive features that are commonly found with good blogs.

If Trump's blog was a joke, Gettr is the comedy act that keeps on giving.

To begin with the new platform that Miller was talking about (designed for Trump) was launched with enough funny memes to make a book. 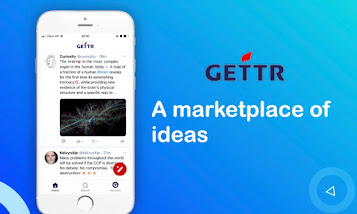 Gettr was hacked on it's first day. The accounts of its most popular people - including several Trump aides - were targeted. Even the official support page was compromised.

In an attempt to bring in right-wing followers the platform is advertised as "a marketplace for ideas." Code for crazies are welcomed.

In what I describe as sweet irony, this platform designed to attract Trump himself with it's Twitter-like features, still hasn't gotten Trump to subscribe to it.

Trump bitch for life, Steve Bannon, described the new platform as "the Twitter killer" in a post on the new site.

I highly doubt Twitter has much to worry about. It appears Gettr is headed for the trash heap where most Trump-inspired lies and propaganda goes.

Yesterday, Motherboard verified that a hacker posted a database to an online hacking forum claiming to have scrapped the information from the accounts of EVERY GETTR USER.

The self described anti-censorship platform for conservative voices continues to flounder like a shark out of water, as Trump seeks to have a presence on the internet.

A Day in the Life of 'Ernie' The Polydactyl Kitten 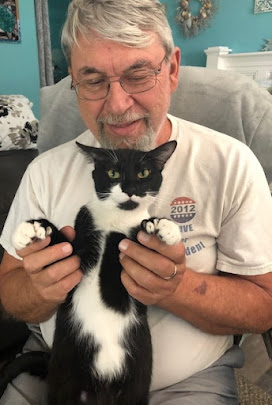 From the start, Ernie was a special kitten.

He came into my wife and I's life, via our son, who rescued him.

But this was no ordinary rescue on city streets. It was something out of a movie.

Seven months ago when Ernie was only six-weeks-old, an owl sunk it's talons into his skinny neck and flew away with him! It was probably the same owl that took his sibling two days prior to the attack on Ernie.

In tears, my son who has a farm with an old barn, described the doomed kitten's screams as it was spirited away.

Then after two days, Ernie was taken by the owl, and he watched in horror as he twisted and squirmed in the owl's claws. 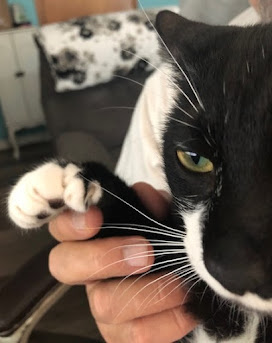 But then fate took a hand and little Ernie managed to wiggle free and fell down into a tree!

Not knowing if he was dead or alive, my son climbed up and found Ernie clinging with his big polydactyl paws to a branch.

He needed a home and we were glad to take him. My wife and I have fallen in love with this fantastic feline who makes us laugh every day.

Simply put, they are cats with extra toes. Sometimes on all four paws, or just in the front, or back.

Ernie is called a Hemingway Cat because the famous American author Ernest Hemingway was given one by a sea captain. It's name was Snow White. 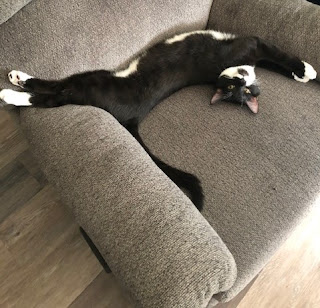 A Typical Day With Ernie

From the moment I wake up - usually around 5 a.m. - Ernie is there to greet me.

He's seven-months-old now, but when I first brought him home he knitted in my beard which was thick enough then to protect the skin beneath.

Since trimming my beard he's moved on to knitting on blankets. As I make coffee he bounds around the kitchen and living room like a cat on crack!

His toys, stuffed with catnip, inspire him to greater heights of buffoonery every day. He heckles our other cats mercilessly, wanting to play.

Our two dogs - Molly, the Pug, and Butters, our Iggy - accept and even tolerate Ernie. It's like they know he's still a kitten.

By late morning - usually 10 or 11 a.m. - Ernie curls up in one of his several favorite napping spots, and blissfully drifts into dreamland.

There hasn't been a day when Ernie didn't make my wife and I laugh. Perhaps it's his youthful exuberance. Or, because he is such a special cat.

When Will They Wake Up? Another Top Trump Enabler 'Thrown Under The Bus' 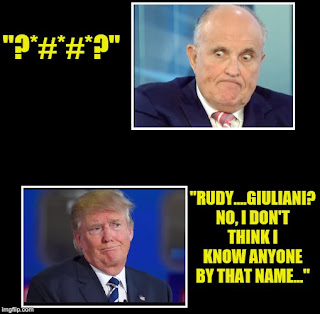 Along with millions of other Americans, I don't understand why Trump supporters and allies continue to follow him even when he throws them "under the bus."

The latest case is none other than super fan, Rudy Giuliana, whose trying to get paid by Trump for his legal work on overturning the 2020 election.

A new book, "Landside: The Final Days of the Trump Presidency," by author Michael Wolff, describes Trump's post-presidency life at Mar-a-Lago resort, and how he's frustrated by the lack of progress to overturn the 2020 election result.

No one worked harder to please Trump than Rudy whose been Trump's personal lawyer and longtime ally loyally backing his lies.

The book reported that Trump was annoyed that he (Giuliani) tried to get paid for his election challenge.

Giuliani is now beset by crushing investigations and potentially millions of dollars in legal costs. He's implored the Trump family and aides to have the Trump campaign, with it's great wealth, to indemnify him.

All he's got so far is a "cold shoulder."

These are trying times for Trump's old buddy who is facing a Justice Department investigation into whether he broke foreign lobbying laws while working as Trump's lawyer.

No one knows exactly the amount owed to Giuliani by Trump but, at one point, Maria Ryan, an aide and rumored girlfriend of Giuliani, told the Trump campaign that his rate for working the election challenge was $20,000 a day, the New York Times recently reported.

The question is, "How does Trump still convince people to believe him after treating friends and foes alike as puppets to be discarded if they displease him?"

It's no secret Trump doesn't reward loyalty when he's in a pinch. Everyone in his circle is expendable if he's in trouble.

When, if ever, are people going to realize that when they become his minion he expects loyalty, but never returns it? 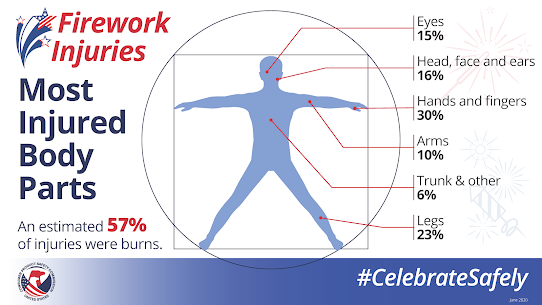 The statistics are grim.

(According to a 2021 report from the U.S. Consumer Product Safety Commission)

-- Most of the firework injuries occurred from June 21 to July 21, and the two leading sources for injuries year-around were firecrackers and sparklers.

-- Children are the ones that are most frequently injured statistically.

-- The biggest increase in injuries last year however, was in the 20 to 24-year-old category.

More Reasons Not To Use Traditional Fireworks:

-- Fireworks terrify household pets and other animals in nature.

How to still have spectacular light shows 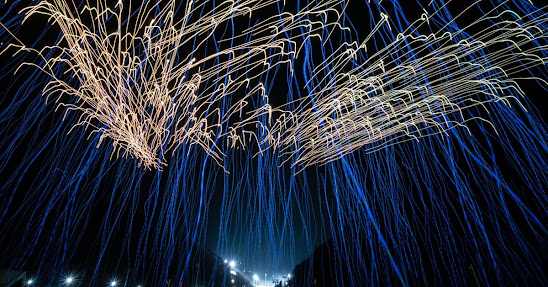 The 21st century version of traditional fireworks are drones with LED lights.

If China - where fireworks were invented - is hosting massive displays of drone light shows why can't the USA do the same?

The light show drones are usually controlled in fleets of hundreds by a remote computer to create colorful shapes and patterns in the night sky.

As the technology advances the fleets will grow (biggest current fleet is 2,018 according to Guinness World Records).

Look at it this way; Americans will still get their spectacles in the sky, but people won't have to die.

There's no need to trash tradition. It just needs an update.