4th of July: Glad To Be Free Today

On this day, also known as Independence Day, Americans across the land are celebrating in all the traditional ways: outdoor barbecues, firework displays, and leisure activities.

We are blessed to be free in this chaotic world. There’s too many repressive societies that don’t allow their citizens the freedoms we often take for granted. No country is perfect in the real world – and we have our challenges.

However, I’m still proud to say I’m an American.

There’s all kinds of Fourth of July activities going on where I live today – check out The Medford (Oregon) Chamber of Commerce’s/Jackson County program – it’s supposed to be the biggest ever.

Interesting fact: The Fourth of July has only been a Federal holiday since 1941. Of course we were celebrating our independence as far back as the American Revolution (1775-83), but Congress never got around to making it official until 1941.

“My dream is of a place and time where America will once again be seen as the last best hope on the planet.” Abraham Lincoln

“I saw courage both in the Vietnam War and the struggle to stop it. I’ve learned that patriotism includes protest, not just military service.” John F. Kerry

There’s 3 things you seldom see in the news

About #1) To accurately identify different types of bias, you should be aware of the issues of the day, and the liberal and conservative perspectives on each issue.

A recent study shows that headlines can have more of an effect on a reader’s interpretation of an article than the text in the article itself – even if the whole article is read.

When it comes to our government we seldom – if ever – get to hear the whole story. For example, check out this video: OPM Hack, ‘do we have the whole story?’

The only thing we can absolutely count on is to take whatever our government says with a grain of salt. Then research, and verify.

On management agendas; anyone with even a shred of common sense can watch just a handful of Fox News shows and see that the entire channel is nothing more than a propaganda mechanism for the Republican party.

Pundifact found Fox News to have only told the truth 18 percent (15 of 83) of the time for the statements they checked.  And even of that 18 percent, only 8 percent of what they said was completely “True.”  The other 10 percent was rated as “Mostly True.”

It isn’t just Fox News either folks. MSNBC and CNN distort (and select) news items to fit their management agendas which are obviously liberal.

What this country needs right now is a racist president 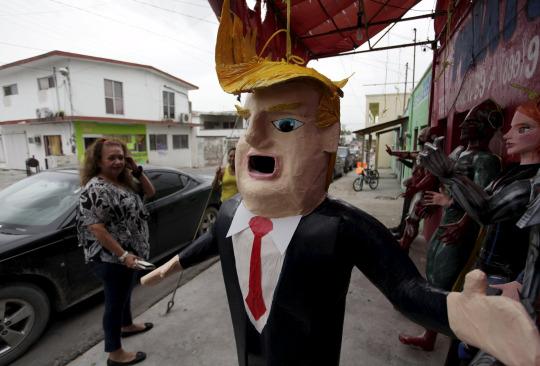 What this country needs right now is a racist president.

Fortunately, we have one running. His name is Donald Trump.

Despite having pinatas made in his image (photo left) by Mexicans on both sides of the border, Trump claims to have a great relationship with Hispanics;

“Thousands of people over the years have worked for me from all the different the Latin countries,” he recently told reporters.

Apparently not all the Hispanics who worked with him, and for him, feel he would make a good president.

Last week, Univision, which also airs the Miss USA and Miss Universe pageants, announced it would end its relationship with Trump over his “insulting” remarks.

Yes, the Donald started off his bid for the presidency by calling Mexican immigrants criminals and rapists and suggested they were pouring over the border non-stop.

You can bet that will galvanize Hispanic voters to vote for him – wink! wink!

NBC announced it was cutting ties with Trump over his racists comments in which he vowed to build a wall between Mexico and the United States to keep Mexican criminals and “rapists” from crossing the border if he were elected president.

While the rest of the campaigning Republicans are looking for ways to connect with Hispanic voters, the Donald is busy accusing them of being scum. Pretty crazy strategy eh?

Here’s the scary part…according to the results of a CNN/ORC survey released Wednesday, Trump, at 12 percent, sits second behind former Florida Gov. Jeb Bush (19 percent) in the race for the Republican nomination.

The Donald managed to jump 9 points in the polls after making his racist announcement! What does that say? I’m no pollster, but it looks like some people would like to have a racist president.

What do you know about this famous theory? The graphics on the left will give you the real lowdown.

During the 1916 bottler's convention, Coke’s new contour bottle was chosen over other entries and was on the market the same year.

Wow! Congress actually lowered the price of a stamp. That never happened again!

The introduction of vacuum-tube amplification for telephone lines allowed AT&T to experiment with sending speeches to distant audiences that listened over loudspeakers.

Diana was born into a family of British nobility with royal ancestry as The Honorable Diana Spencer.

"She Loves You" is a song written by John Lennon and Paul McCartney for release as a single in 1963.

"I'll Get You" was written by Lennon–McCartney, and released by the Beatles as the B-side of their 1963 single "She Loves You". The song was initially titled "Get You in the End."

After legislation was signed by President Lyndon B Johnson – Americans started receiving Medicare health coverage. Today, Medicare continues to provide health care for those in need.

“He’s faster than a speeding bullet! More powerful than a locomotive! Able to leap tall buildings in a single bound! ("Look! Up in the sky!" "It's a bird!" "It's a plane!" "It's Superman!")

Fan’s worldwide will be celebrating the introduction of the world’s first superhero today.

Action Comics #1 (June, 1938) is the first issue of the original run of the comic book series Action Comics.

For this reason it is widely considered both the beginning of the superhero genre and the most valuable comic book of all time.

Jerry Siegel and Joe Shuster were paid $10 per page, for a total of $130 for their work on this issue.

The original panels were rewritten and redrawn to create the first page of Action Comics #1:

GOP Fashion Show Should Be Inspirational

I’d like to invite you to sit back, relax, and to enjoy the following fashion show highlights featuring GOP presidential wannabes strutting their stuff.

There’s already 14 contestants who have declared their intention to run for president.

Like any good fashion show there’s favorites – stars if you will – and newcomers to the catwalk. Here’s the top 7 by my measure.

Jeb Bush will be the first person walking down the runway (all polls indicate this) followed by Ben Carson, Ted Cruz, Mike Huckabee, Rand Paul, Marco Rubio, and we must not forget Donald Trump!

WHAT TO EXPECT FROM THE STARS?

After huddling with political fashion experts, I’ve come to the conclusion this will be a very entertaining show. Here’s what to look for:

Jeb Bush, decked out in a red-white-and blue jumpsuit, will tap dance down the walkway to the tune of "A More Perfect Union" by Titus Andronicus.

Ben Carson, sporting a gold sequined tuxedo, is expected to moonwalk down the catwalk to the sounds of Jimi Hendrix’s version of the Star Spangled Banner.

Ted Cruz, in a silk red and white dinner jacket over white shorts adorned with maple leafs (a nod to where he was born in Canada), is expected to shuffle down the walkway to strains of "This Land Is Your Land" by Woody Guthrie.

Mike Huckabee will be wearing a stunning J.Edgar Hoover-inspired design in satin and lace while waltzing down the walkway to Simon and Garfunkel’s America.

Rand Paul, who can’t dance, will stride down the catwalk wearing an American flag-themed two-piece bathing suit to the sounds “Living in the USA” by the Steve Miller Band.

Marco Rubio is expected to cause a sensation in his Miami Vice white jacket, orange body shirt, and flowing white trousers trimmed in 14-carat gold. When he comes down the catwalk to “One Nation Under a Groove” by Funkadelic , conservative hearts will flutter!

Donald Trump, wearing a designer version of Uncle Sam’s red-white and blue suit will be sure to turn heads with his fancy footwork down the catwalk to the Spanish version of America The Beautiful.

Thanks for stopping by. I hope you enjoyed the show.

Once dubbed “America’s craziest governor,” LePage has also made national headlines for joking about shooting a newspaper cartoonist, saying the NAACP can “kiss my butt,” and claiming that the worst thing the chemical additive BPA could do is “give women little beards.”

His high-profile antics, Republicans claim, have squandered his political capital.

Citics say his decision to retreat to his office and issue a flurry of vetoes (more than 100 so far this session) shows a lack of leadership and that his attacks on fellow Republicans are counterproductive.

In a demonstration of true pig-headedness, LePage has thwarted lawmakers by threatening to veto every bill until the Legislature passes one of his top priorities.

The real kicker is he admits wasting lawmakers' time because he knew they would be overturned.

Finally, they say his latest actions, including meddling in a charter school's personnel decisions has gone too far.

Lawmakers are accusing LaPage of blackmailing Good Will-Hinckley, a private organization that runs the Maine Academy of Natural Sciences, into rescinding an offer of employment to Democratic House Speaker Mark Eves, the Bangor Daily News reports.

According to Lance Dutson, a Republican strategist;

"There are members of the Legislature that have stood beside Gov. LePage through thick and thin that are saying that they are done with him. That's something that I've never heard before.”

He’s publicly attacked Senate Republicans for not standing up for tax cuts.

If LaPage is impeached it would be a first for Maine. The man however seems to thrive on controversy.