Georgia is on My Mind: A Special Election That's Going To Determine the Nation's Future 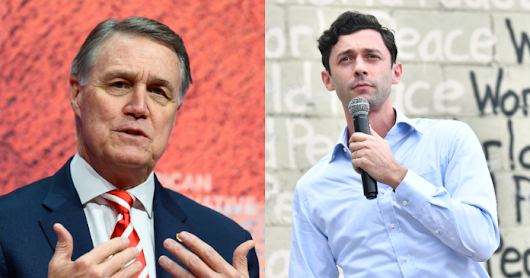 No peace I find

Keeps Georgia on my mind."

I can't remember the last time when all eyes were on Georgia to decide the political fate of a newly elected president and administration.

I suspect it's a first

Georgia Senate candidates have just three more days to sway the remaining registered voters to cast their votes for them.

Thus far there has been a record early voting turnout. More than 2,8 million people have cast their ballots.

If the Republicans win one of the two races they will maintain control of the Senate. If both Democrats win they assure a Senate majority, giving Joe Biden an opportunity to pass more laws.

This election is too close to call a winner. Whoever does win, it's not going to be by a wide margin.

Our country's fate is tied to this special election. If Mitch McConnell retains his position of power in the Senate, it doesn't bode well for change and a new direction.

McConnell will treat Biden the same way he treated Obama, by obstructing every legislative move he tries to make.

Biden's challenges will be many, but his term will produce more needed changes if the Democrats take the Senate.

The damage Trump has done to our government is going to take years to repair.

My eyes are on Georgia, hoping for the best result. 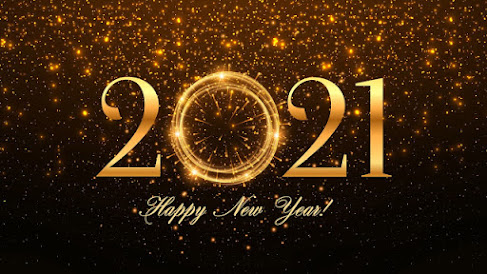 Despite Trump's tantrums that will continue for another 19 days, there's millions of Americans looking forward to this new year.

Our new president Joe Biden will have his hands full picking up all the balls Trump dropped when he lost the election on Nov.3rd.

First and foremost, Biden's medical advisory team has to fix the broken vaccine roll out under Trump's Coronavirus Task Farce.

At the same time Biden's team will be facing international challenges caused by Trump's lack of foreign policy and his ridiculous America First policy that alienated our allies.

Throw in the economic crisis that has put millions of Americans out of work and hungry, and you begin to see the scope of the challenges Biden's administration is facing.

But there is hope

The country's chances of recovery are much greater with a sane president who has morals and a conscience.

The foundations of democracy held up under Trump's assault, but will need to be reinforced so another rogue president can't come along and take this nation to the brink of fascism.

It's likely Biden's entire term will be devoted to repairing the damage that Trump has done at home and abroad.

But that's okay. We'll be on track to building America back up, and greater than ever before.

It hasn't been pretty.

As fireworks go off tonight in a socially distanced Times Square in New York, and super spreader New Year parties violate CDC instructions, we've come to the last gasp of a terrible year.

The only bright light in the last 364 days is we elected a new president despite Trump's attempt to overturn the will of the people. Democracy stood tall and he failed to tear the system down.

Tomorrow is a new year

I have high hopes for Biden's administration. Unfortunately, Trump and his minions are dead set on creating chaos right up until inauguration day.

Despite Trump's feeble and pathetic plan to steal the election in January, his final attempts are doomed to failure.

2021 will be a year of reckoning for his past crimes, both as a civilian and during his presidency.

It will be a long process restoring our government back to the days when the world respected the USA.

The task will begin on January 20th.

Year In Review Cancelled: No One Wants To Remember 2020 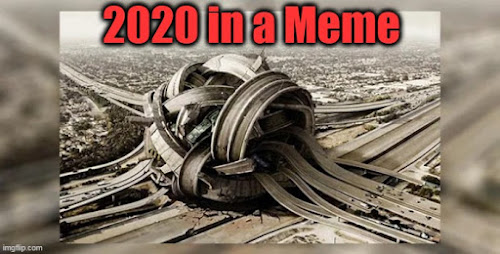 Usually at this time of year I run a Year in Review post.

Due to what a hellish year it's been I'm cancelling that tradition which dates back to 2008.

If you want to see a re-cap of this miserable year turn on your TV or roam social media platforms. They're packed with events we'd rather not remember.

This year will only be remembered favorably by the wealthy and the Wall Street elite. They all made a killing (financially) while the rest of the country suffered through a pandemic (over 330,000 deaths and counting), food shortages, and economic blows (like losing jobs).

It's hard trying to put a happy face on 2020. Reality has been too harsh. Who wants to remember our sociopath/narcissist president trying to steal the presidential election?

Yes, there's lessons to be learned next year, but showing a montage of the carnage for entertainment doesn't interest me.

Experts in all fields, under the new Biden administration, will have their hands full correcting the mistakes and blatant damage Trump has wrought upon our nation.

Another 2020 Moment: Trump Awards Himself the Nobel Peace Prize 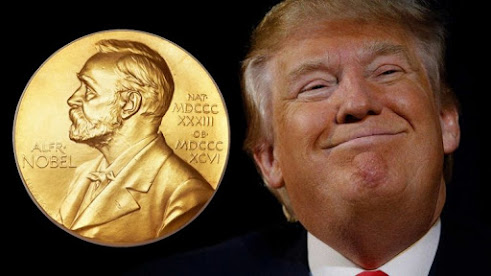 This year has been norm shattering. Many things in our society will never be the same again.

The list is too long to run here, but the top three reasons why our lives have changed forever are; the pandemic, Trump trying to steal the presidential election, and an economy in free fall.

Again, space doesn't permit me to run all the crazy things Trump's done this year.

After watching the video Trump shared Monday, I am submitting it as a great example of what Americans have been putting up with.

In an awkward attempt to congratulate himself, Trump tweeted a montage of his supposed accomplishments (most in his tiny brain).

The most amusing claim was he won The Nobel Peace Prize. Of course, he didn't, but that didn't matter. He's shown (in a doctored photo) holding up a certificate alongside some real Nobel Prize winners.

A caption below states, "Trump stands for peace" as the logo for the Nobel Peace Prize fills the lower right-hand corner of the screen.

It encapsulates Trump's entire reign; lying and revoking reality at every turn.

In an interesting result to his latest self-serving promotion, he violated intellectual property law; copywrite and trademark infringement violations.

It's a re-occurring theme throughout Trump's presidency. He's used music from groups and individuals in rallies without their permission. His 2016 and 2020 campaigns used others intellectual property rights with impunity.

Don't expect the Nobel Foundation to go to court over this infringement however. They don't want anything more to do with Don the Con, or his alternate universe.

Looking For Laughter in the Waning Days of 2020

Laughter has become a rare commodity in 2020.

The reason, as we all know, is the worst pandemic to hit America in over 100 years, a crippled economy, and a president that's completely out of control.

It's tough getting guffaws when people are wondering where their next meal is coming from, or if they'll be evicted from their homes.

Despite the massive wave of challenges there are still people who manage to laugh. My theory is humor is in our DNA.

I got a good laugh today after reading about some guy back east - where the snow is coming down like a solid white blanket - who gave his neighbors (and social media) something to laugh about.

He used a flame thrower - I'm not making this up - to melt the snow on his driveway. The kicker was he dressed up like cousin Eddie in National Lampoon's Christmas Vacation.

What a hilarious sight - seeing your neighbor wearing a white bathroom and snow cap with flaps swinging a flamethrower from side-to-side by his curb.

The point is, I'm always looking for a good laugh. In the Era of Trump this is almost Mission Impossible, unless you make an effort to turn away from all the shiny objects Trump waves every day.

If you can't find anything to laugh about around you, don't be afraid to look for comedians on TV and social media. I consider them First Responders for people who are bummed out.

Laughter is a balm for the suffering soul. It's a power that shouldn't be underestimated. Especially when times are dark.

I take heart with poet Robert Frost's quote; "If we couldn't laugh we would all go insane."

Now Is Not The Time To T-P Houses 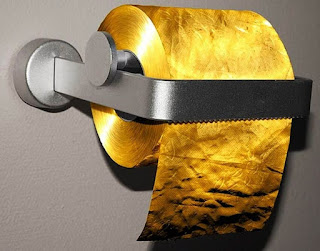 "Due to the cost and scarcity of toilet paper T-Ping trees in peoples yards is illegal for the foreseeable future."

Of all the challenges that this pandemic has poised, the weirdest has to be our obsession with having enough toilet paper.

Store shelves have been devoid of toilet paper off and on since March. Every now and then there's a sudden panic (like during the current surge), and retailers like Costco and Walmart have to limit purchases to one package per customer.

The burning question is why TOILET PAPER?

I can see why Lysol and other cleaning products are highly desirable... but toilet paper? 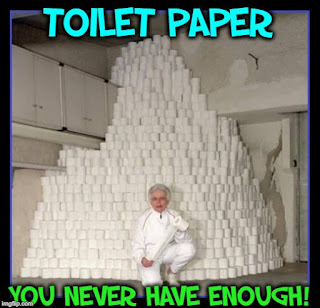 According to experts who study weird shit like this, toilet paper has become a symbol of safety and preparedness during the pandemic.

Cases of hoarding toilet paper have been reported throughout the country since March.

At one point early on, toilet paper was so hard to get (when retailers were caught off guard without enough supplies) it was selling on the black market for $ 3.50 a roll.

One crazy incident that comes to mind (in April) happened in a Costco in Seattle, as employees were unloading a pallet of toilet paper. It was as if the neat stacks of white rolls was hit by a swarm of piranhas!

What's the matter with people? Everyone just needs to take a deep breath. I assure you there's more important items to hoard than toilet paper - take any food for instance.

Look at it this way; people have managed to wipe their bums for thousands of years - without a roll of toilet paper.