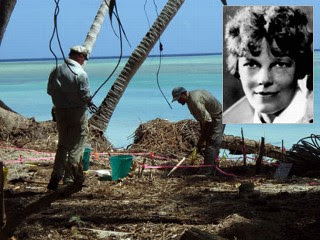 By CHRISTINA CARON
It has been 72 years since famed aviator Amelia Earhart and navigator Fred Noonan disappeared while attempting to fly around the world. But the mystery remains unsolved: Nobody knows exactly what happened to Earhart or her plane.

Now researchers at the International Group for Historic Aircraft Recovery, or Tighar, say they are on the verge of recovering DNA evidence that would demonstrate Earhart had been stranded on Nikumaroro Island (formerly known as Gardner Island) before finally perishing there.

During May and June of next year, Tighar will launch a new $500,000 expedition, continuing the archaeological work it has been doing on the island since 2001.

"We think we will be able to come back with DNA," said Tighar's Executive Director Ric Gillespie, who is working with two DNA labs in Ontario, Canada, Genesis Genomics and Molecular World. "We were out there in 2007 under the impression that in order to extract DNA we would need to find a piece of a human, and we didn't find anything like that. But we did find what's best described as personal effects of the castaway that died there."