The Taliban Have a Major Problem: They're in a Hot Sticky Mess 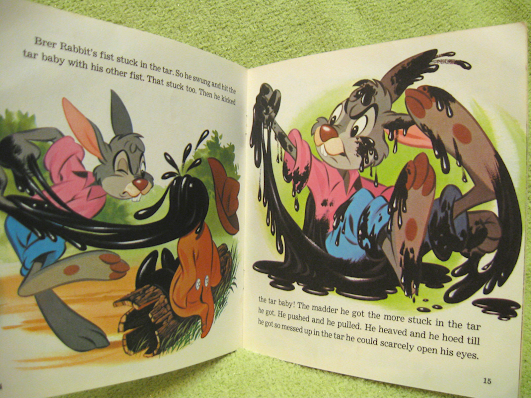 The Taliban's seizure of Afghanistan reminds me of a fable from the tales of Uncle Remus, where Brer Rabbit always outfoxed Brer Fox in The Man's Garden.

My favorite tale, Brer Rabbit and the Tar Baby, echoes the current situation that the Taliban are in. They're stuck with the fact that there's no money in the country they just conquered.

Like Brer Rabbit found when he slugged and kicked the tar baby, it made matters worse. The more he kicked and hit the tar baby the more stuck he became.

The Taliban have more to worry about than just having no money (the USA and the rest of the world froze their assets); they have to deal with enemies embedded in the war-torn country.

The northern provinces have seen a gathering of armed Afghans who are intent in overthrowing the Taliban.

Add having enemies like ISIS-K popping up at the worst times, a massive homeless population (the biggest in the world), dwindling food supplies and cash on hand, and it's a sticky situation...at best.

Unlike Brer Rabbit who got stuck in the tar baby but eventually escaped, it's unlikely the Taliban will be as lucky as the country collapses around the "victors."

Should We Sympathize With Unvaccinated People Who Are Putting Others At Risk? 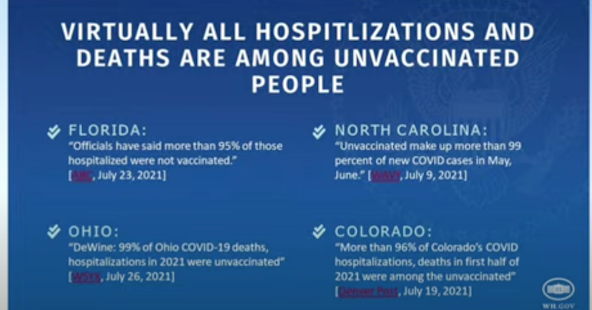 I've always been of the school that we all make our own beds in life, and have to live (or die) with the results.

If this sounds like a lack of empathy, it's not. It's just a practical reality. A lot of people don't believe in science and would rather take a medicine for animals (cows, horses, etc.) than something approved for humans.

I'm trying to refrain from calling these people who think bleach, or put light up their body cavities, as a way to fight the new deadly Delta variant of the killer virus plaguing our country, stupid... but it's not easy.

Everyday, I read and see examples of the unvaccinated dying in record numbers in states (particularly the ones with Republican governors). It's discouraging.

Here's four current stories about the unvaccinated that are admittedly sad, but that illustrate my point.

-- Caleb Wallace, who helped organize the "Freedom Rally" on July 4, 2020 for those "sick of the government being in control of our lives," is now on a ventilator after becoming infected with the virus, according to his pregnant wife who consented to a "do not resuscitate order."

-- Phil Valentine a conservative talk radio host from Tennessee who had been a vaccine skeptic died in a hospital gasping for air.

Ironically, after testing positive for the virus he told his listeners he didn't get vaccinated because he thought he'd die.

But after moving into the critical care unit his brother Mark said he regretted he wasn't a more vocal advocate of the vaccination. It was too late by then.

The radio station he worked for called him a pioneer "shock talk host" who pulled no punches.

-- In a heartbreaking story a middle-aged couple who waited to get vaccinated until they thought it was safe, both became infected from the virus.

Lisa Steadman had spent more than a week in a central Florida hospital recovering from a serious case of COVID-19, while Ronald Steadman, who had also contracted the coronavirus, battled a milder case from home.

Lisa kept in contact with check-in phone calls. Before she checked of the hospital the last thing he said was that "he was improving."

When she came home it was like a scene from a horror movie; she found Ron unresponsive on his side of the bed. Their three barking dogs led her to him. He was dead.

She explained to reporters that it wasn't like they were against a vaccine. They just thought it was developed too rapidly.

It would be easy to go on. Even easier to judge each of these unnecessary deaths. Every victim chose not to be vaccinated, either because of their radical ideology or they just didn't trust getting the shot because of all the disinformation circulating online.

I would be remiss if I didn't admit that it pisses me off that people go unvaccinated during a pandemic. They're killing other people, regardless of their reasoning. 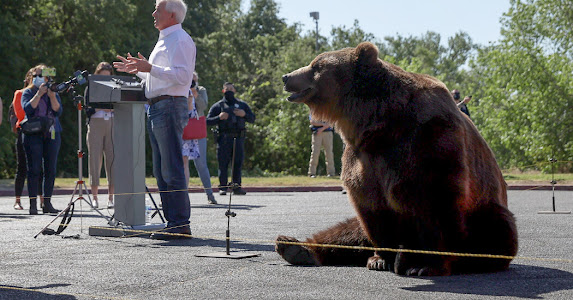 (Photo of Republican California recall candidate, John Cox, with his bear talking to a crowd of about 12 people. Just think, he could be California's next governor!)

Amazing as it may seem, a minority party is do a pretty good job at trying to seize power in the United States of America.

GOP members of Congress are stopping any legislation that doesn't meet their approval using the filibuster. Despite being the minority in both the House and the Senate, Republicans have been the one's calling the shots.

It doesn't stop there. One of the tactics the self-proclaimed Party of Trump uses is to take control (from governor to city dog-catcher) of every state by whatever means possible.

Using an arcane law to game the system, California Republicans have gathered enough signatures to file for a recall election, which is just around the corner.

Thank The Terminator, aka Arnold Schwarzenegger, for paving the way to a successful recall (for the first time in the state's history) in 2003.

It was the first time anyone managed to get the required signatures of 12-percent of the turnout in the previous election.

This time - with the help of a three-month extension granted by a judge - the organizers were able to deliver; forcing a recall election.

If the current governor, Gavin Newsom, fails to get 51 percent of the vote he WILL BE DEFEATED while whichever of the 46 clowns on the ballot gets the most votes becomes the new governor.

To break that down further - someone could become governor of the biggest state in the USA with only 10 percent of the vote!

The system is insane, and needs to be tossed in the garbage.

People have been talking about off-year elections like this where voter turnout is normally low unless one party is seriously motivated to vote.

Such as the Republican minority in California that may be on the brink of taking over the Democratic majority, and putting a right-wing troll in the governor's mansion.

It could happen. If Newsom is defeated it'll be an anti-democratic, legal coup in the most liberal state in the nation.

Democratic voters are going to have to turn out in record numbers in every state. Otherwise the majority of people in America are going to be controlled by a minority of radical racists' and white supremacists. 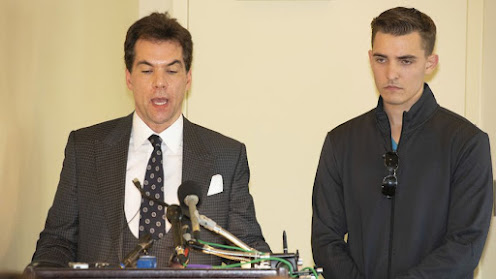 When it comes to political scumbags, Jacob Wohl (right) and Jack Burkman (left) are poster boys for the radical right.

Both have a long history of fraudulent activities that would make any wacko drool. When it comes to conspiracy theories they're the canaries in the asylum.

I'm pleased to report that the Federal Communications Commission has proposed a $5.1 million fine against the duo for improperly making robocalls to cellphones without getting people's consent.

There's still a hoop or two for the FEC to jump through, but the chances of getting the largest proposed fine the FEC has ever asked for in this specific violation appear to be good.

This same conservative pair of swamp creatures were charged with four felonies in Michigan last year for allegedly intimidating voters with robocalls that spread inaccurate messages about voting by mail.

As soon as I get a date when the Michigan felony trial will be held, I'll share it.

Robocalls were one of the sources of disinformation leading up to the 2020 election, with characters like Jacob and Jack in the forefront.

Of the two creeps, Jacob has the most crazy creds as an American far-right conspiracy theorist, fraudster, internet troll, and conservative lobbyist.

Jack's crazy creds are there, he's also a conspiracy nut, and a conservative lobbyist, that's teamed up with Jacob in multiple scams.

Here's hoping the Beavis and Butthead of the right-wing operative community spend many years behind bars - along with getting slapped with that fat $5.1 million fine the FEC proposed. 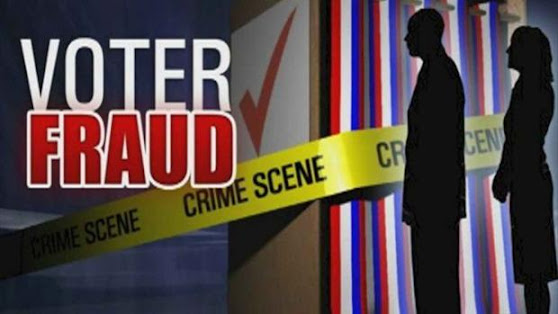 The only verifiable voter fraud in the 2020 election was committed by Republicans.

Today we're going to hear about a no-party candidate who ran a successful ghost campaign in a South Florida state senate election.

Alexis Rodriguez is expected to enter a guilty plea before a Miami-Dade Circuit Judge and admit that he accepted $45,000 from former GOP state Sen. Frank Artiles to run for office.

The Democrat running in the district had the same surname as Alexis Rodriquez; Sen. Jose Javier Rodriguez.

The name on the ballot was "Alex Rodriquez," the same as that of the baseball Hall-of-Famer and Miami celebrity.

Alex Rodriguez received 6,300 out of 215,000 ballots cast in the SD 37 runoff which was won by just 32 votes by Republican Sen. Ileana Garcia, who unseated the incumbent Sen. Jose Javier Rodriguez.

Republican campaign organizers are nervously watching the case that has launched a broadening voter corruption probe into two other Florida counties; SD 39 and SD 9.

The bottom line is there was voter fraud in 2020, and it was committed by Republicans. I hope that settles the controversy about which party was cheating. 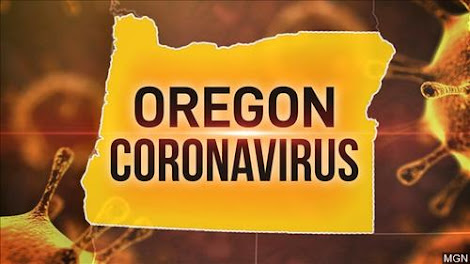 As an Oregonian watching the state struggle with a COVID surge worse than last year, I'm disgusted and disappointed at what I'm seeing.

I live in Medford, currently the worse county in the state for COVID infections.  Watching the numbers of victims rise daily is the sad reality here.

Why is Oregon doing so bad with this latest surge?

Last year at this time we had the numbers of infections under control, and ranked among the top states with the least amount of outbreaks.

One of the reasons is burn-out. People are tired of complying with the new masking rules and just want to return to "normal."

Unfortunately that's not possible. And to make matters worse Oregonians are ignoring the science and fighting face masks in schools and other public places.

For example, the superintendent of the rural Alsea School District told parents they can sidestep the governor's mask requirement by applying for an accommodation for their children under federal disabilities law.

According to superintendent Marc Thielman, "The majority of my parents are skeptical and no longer believing what they're told," as if that was a legitimate excuse.

Governor Kate Brown was shocked that Thielman was undermining her policies {the science} by "Instructing students to lie about having a disability."

For the record, Thielman is planning to run for governor next year. It appears he's building up his crazy creds to attract right-wing voters.

Not everyone has decided to board the "mask skeptic train," however.

Oregon resident Jenny Jonak, who has an 11-year-old daughter with autism and health problems that make her more susceptible to the current Delta variant, said wearing masks is a "very small inconvenience" to protect vulnerable."

The key to reversing this surge is vaccination and taking proper safety precautions.

Having students lie about face masks is not the solution. It's the problem. As long as skeptical school officials and lawmakers push back against the science, the pandemic will never end in Oregon.