But the 2020 flu bug is much more dangerous than a case of sniffles, and sore throats. The fate of our republic is at stake this time.

Trump flu has infected Republican senators preparing to determine his fate in only the third impeachment trial in American history.

The debilitating effects of Trump flu include complete loss of shame, hyper partisanship, lying under oath, and the ability to avoid facts like the plague.

There is no inoculation for Trump flu. Once someone has it, chaos will rule their life as they follow the pied-piper of lies to whatever depraved depths he chooses to go.

Kick Trump's ass out of the White House by indicting him for his high crimes, or at the polls in November.

Those sick GOP senators that were infected will pay the price when they're kicked out of office by angry voters cleansing the government.

What Will They Say? Future White House Historians Studying the Trump Era 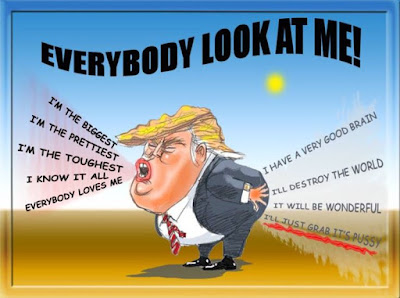 Someday, White House historians are going to look back at the Trump era, and cross themselves!

They'll compare it to the Dark Ages in Europe where monarchs ruled and the common man was at the mercy of the king.

They'll examine the mountain of lies Trump spewed while fouling the Oval Office with his corpulent body.

They'll marvel at how much corruption Trump got away with in a short span of time.

They'll chart how Trump's foreign relations were all failures, and how he almost launched World War III in the Middle East trying to divert attention from his senate impeachment trial.

They'll shake their heads with wonder when they check out his Twitter account and how he went after world leaders to just common Americans, like a rabid badger.

They'll try to decipher Trump's handwriting, but will be unable to.

They'll pour over numerous charts and graphics that were presented to Trump during briefings to keep his attention as he did not read, and lost focus listening to someone else read.

They'll also have the original Weather Chart graphic where Trump infamously took a black marker to it, and claimed Alabama was in the path of a hurricane (that was actually going in the opposite direction).

They'll have a compilation of Trump quotes from "I know the best words," to "I'm the chosen one."

BACK TO THE PRESENT

Because, I don't know if Trump is going to be indicted by the senate for high crimes and obstruction of justice, or if he's going to lose the 2020 election, I cannot complete how historians will record his exit from office.

Another Trump Coverup: Americans Want Answers Now, Not in Weeks!

While covering up the Ukraine scandal, Trump is also busy covering up another scandal/crisis that has set the Middle East on a war standing.

Trump's enablers in government abruptly - and with no excuse - canceled three classified congressional briefings yesterday that were related to the ongoing Iran crisis.

Today, The Pentagon scrapped a classified briefing on Iran for the House Armed Services Committee. Congress was informed that it would get briefings in the coming weeks.

Weeks! That's crazy! The balance of power in the Middle East has shifted. Americans are in danger. The public deserves to know why.

I think it's plain to see what's happening. Trump put out the word to stonewall congress - it's become a habit - about his bullshit reason for nearly starting World War III.

Now congressional lawmakers are going to have to fight tooth-and-nail just to schedule a hearing on what should be a HIGH PRIORITY issue. Who knows what he'll do next?

It's clear Trump and his puppets are lying about why he suddenly assassinated Iran's #2 leader. The changing stories coming from The Defense Department, The Pentagon, and The White House, point to a cover up.

At first, Trump claimed the American embassy in Baghdad was in danger of an immediate threat. Then it was four embassies. Then the threat went from imminent, to days, and then morphed into the excuse General Solumani has been a threat "for a long time."

Sooner, or later, Trump's cronies are going to have to appear before congress and answer some serious questions.

For example: Why didn't the State Department issue warnings about specific threats to any US embassies before Trump targeted the Iranian general?

Trump is out-of-control. Being impeached put him over the edge. Why else would he do something so plainly stupid that it stunned Americans and our allies around the world?

Iran was a wag the dog moment where Trump wanted everyone to take their eyes off his embarrassment that he's been impeached. It was also good theatre to rally his base and fake patriotism at an opportune time.

The majority of Americans aren't fooled by Trump anymore. The polls have shown that. After 15,000 plus lies in three years, Trump has no credibility here, or abroad.

The important thing however, is that the Senate does it's job fairly, and those GOP senators look at the facts before making their decision to acquit, or indict. Their choice is simple; country, or party.

Will those Republican senators elect to protect our Constitution... or, the most corrupt president this country has ever had? 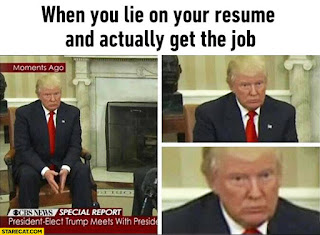 An anonymous White House source emailed me the following information about Trump this morning;

"I talked Trump into doing a resume. Here's the results."

tO WhoeVeR iss REaDinG tHis,

I'm qUaliFied tO dO anything bEcaUse i'm tHe CHoSeN oNe

** I waS ThE BEsT pResIdeNt AMeRiCa eVeR HAd!

** I HAve tHe BEst wOrds

** i stARTed mY oWN uNIveRSity

** I STartED a Yuge Charity fOUNdaTIon

** I Was nAmed WhiTe gUY Of tHE yEAr By NAtiOn EUroPa

After deciphering Trump's childish attempt, it occurred to me to ask my source why would Trump even need a resume?

There was a pause, then I received this:

"Trying to keep him occupied with something other than starting wars, attacking the media, and the upcoming Senate Trial.

"Because a resume is all about him, Trump thinks it's like writing his biography!"
(Signed) MT 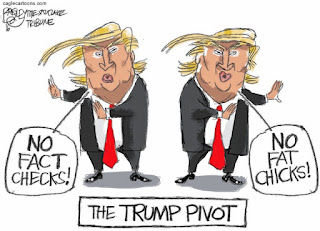 Despite the White House's best efforts to stop more evidence from accumulating against Trump, another dump of damning facts has emerged.

This time evidence is coming from Lev Parnas, one of Rudy Giuliaini's Soviet-born associates who got embroiled in the impeachment inquiry.

The judge in charge of Parnas' (separate) case in New York, allowed the transfer of WhatsApp messages, text messenges, and images from his personal records, according to his attorney Joseph A. Bondy.

McConnell has sought to dismiss the trial although it doesn't appear he has enough Republican support to get away with it. 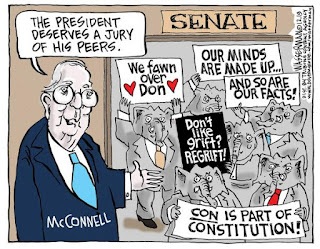 With the additional evidence discovered in just the last three weeks, the case against Trump has become even more solid.

Seeing this, McConnell is even more determined to not have a fair trial.

The only chance of any fairness will come if four Republicans vote for witnesses and release of transcripts.

If witnesses are allowed to testify and documents are released, the trial could suddenly take an unexpected turn and Trump could be convicted.

I wouldn't bet on it, but you never know. We're not living in normal times. 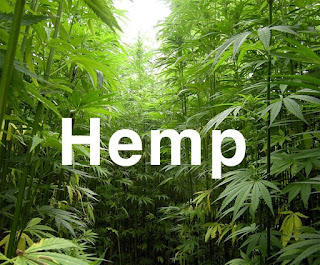 I wish I had a nickel for every story about cops pulling over people with hemp that they were sure was cannabis.

Thanks to the confusion between illegal THC-rich cannabis and newly-legal, low-THC cannabis - legally known as hemp - numerous lawful individuals have been unfairly targeted by law enforcement officials.

Here's a case to illustrate my point:

A couple of enthusiastic NYPD officers confiscated 106 Lbs. of raw hemp after a suspicious FedEx driver took it upon himself to report the shipment.

This was despite the fact that the cargo was shipped along with third-party lab reports and necessary documentation proving it was legal hemp.

The eager officers then contacted Green Angel CBD - who had ordered the $30,000 hemp shipment from a Vermont farm - and told them to come and collect their cargo.

Upon arrival at the station, however, the brother of the company's owner was arrested and charged with felony marijuana possession before being released on bail the next day.

Needless to say, the bust was a bust and all charges were dropped. Brothers in Hemp filed a lawsuit against the City of New York.

Meanwhile the confusion continues from state-to-state and from city-to-city. In most cases the hemp seized is destroyed before the owner can be cleared, resulting in financial losses that should never have happened.

One more true story related to the topic today:

Until states and cities get their shit together and start educated their law enforcement personnel this perpetual problem will continue to hurt a lot of honest people and businesses.

It's appalling to me that law enforcement is universally ignorant about the federal hemp law and their own state hemp laws.

One Lie Too Many? Did Trump's Latest Falsehood Cross a Line? 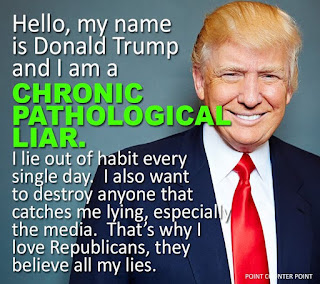 The president of the United States lies every day.


It's no secret at home, or abroad.

Trump is the most prolific liar of the 20th, and 21st century. And he's getting away with it... up to a point.

He's earned his place in history by being impeached for lying about holding our ally, the Ukraine, hostage to achieve his political ends. But that didn't cure his lying ways. If anything he's doubled down.

Why? Because he can. He's confident that Senate Republicans will acquit him for abusing his power because they fear him, and his supporters.

Bringing America to the edge of a war with Iran with his dangerous lies about an imminent threat shows how deadly Trump's lies have become after three years.

He lied to Congress, and he lied to the House about why he ordered the drone strike that killed Iran's #2 leader.

Apparently he crossed a red line with some Republicans in the House and Senate who are now asking for a real accounting of what led to the strike.

Trump's minions, from Pompeo to Pence, have been trying to paint a false picture of making America safer by assassinating Iran's top general who supposedly was about to attack at any moment.

The changing narratives from Trump and his cronies is muddying this attempt to coverup the truth under the guise of patriotism and leadership.

I have a hunch this latest lie about the reason he ordered the assassination of a foreign leader, is not going to go away soon. It'll hover over Trump's Senate trial like a pesky fly.