Goodbye To The Last Saturday of 2017 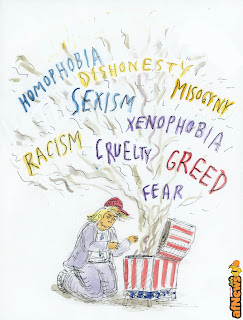 I'm neither sad, nor glad. Maybe when tomorrow rolls around - the last day of the year - I'll feel something about the last 364 days.

I'm 67 years-old, and have never seen a year that brought worse change to America than this one under Trump's regime.

It was like a political Pandora's Box opened and spewed out all of its vile contents; waging war on society.

Having an illegitimate president who was aided by the Russians, has demoralized two-thirds of the country. Trump's approval rating is the lowest of any president since such polls were first taken in 1952.

On this last Saturday, I feel more like a survivor than anything else. I've witnessed with disgust, the rise of neo Nazi's and the KKK, and how our Disruptor-In-Charge has encouraged the so-called alt-right in America.

I'm tired of hearing the president of the United States lying every day. I still can't believe Trump's assault on all of our international allies.

Tomorrow, along with you, I'll celebrate the passage of this year, and hold high hopes for the next!

Trumps 'Records' Are All In His Head 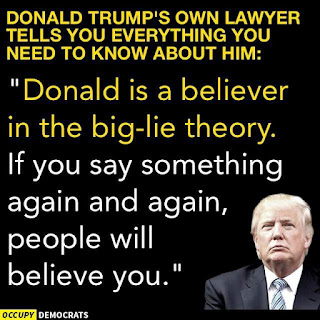 The most recent case of Trump lying about the supposed "records" he's broken in his first year happened Wednesday, when he visited some Florida firefighters.

He spent the brief visit bragging about his supposed accomplishments.

The whopper-for-the-day came when he claimed he helped pass and sign more laws than any of his predecessors during their first year in office.

Fact: Every president since Eisenhower (who signed the most laws) signed more laws than Trump in their first year. He comes in dead last, but he didn't let that bother him yesterday.

As usual, Trump makes up his own realities and expects people to go along with them. I wonder what those hard working men and women thought about his ego-driven visit?

How many of those firefighters knew he was lying but had to stand there and clap?

This revision in history was closely followed by Trump's biggest whopper of the year - his Tax Scam. Or, as financial experts call it, the huge boon to the wealthy and corporations.

He's been outright lying to the public ("This tax reform is not going to be good for me, or my friends") about what provisions the bill really held.

To put the cherry on the cake, Trump claims it's the biggest tax cut in history.

That's bullshit. It's another record only existing in his tiny brain. For the real record:

And, Presidents Kennedy and Johnson did too.

Trump's disconnect with truth and reality is moving us towards a Constitutional crisis. Tweet by tweet. Lie by lie. 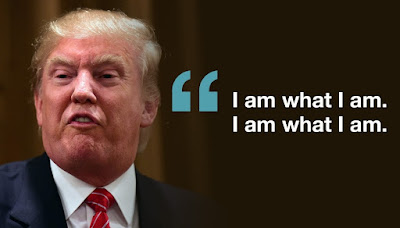 "It is the act of a bad man to deceive by falsehood." -Marcus Tullius Cicero

Trump's fragile ego has taken a beating this year.

The final blow to Donny's ego happened yesterday when he saw the results of the annual Gallup Poll on "Who Is The Most Admired Man in America."

The answer was...Barack Obama (10th year in a row)! I imagine Donny's face went from orange to beet red when he saw that.

Trump is set to finish 2017 with the lowest approval rating of any modern president at this stage of his first term, according to a recent CNN poll.

Trump's penchant for lying, and doubling down on lies, is no secret to anyone. We've never had a president who publicly lied everyday he was in office before.

Only 37 percent of Americans think he's doing a good job. That's worse than Ronald Reagan's last year in office, and is the lowest since Gallup started polling issues in 1952.

Since Jan. 20, when Trump was inaugurated, his disapproval rating skyrocketed, from 44.2% to 56.3% in the.RealClearPolitics average.

And the big policy win Trump is touting from his first year in office, the GOP tax plan, is extremely unpopular. Just 26% of voters approve of the tax bill, according to the latest Quinnipiac poll, released Dec. 13.

Some more reasons why Donny's ascension to the Oval Office has been a disaster so far:

* Puerto Rico was abandoned by Trump who treated it's residents like second-class Americans.

* Trump tried to get rid of Obamacare and almost succeeded when he added an amendment to his Tax Scam to get rid of the enrollment mandate.

* The rise of hate in our national dialogue and the so-called alt-right (Neo Nazis, KKK, etc.) movement was encouraged by Trump, who invigorated their cause by standing up for them during the Charlottesville, Virginia, hate rally.

He followed that up by declaring Jerusalem the capital of Israel...a move that brought the entire United Nations against America. After being opposed, Trump threatened to keep a list and to retaliate.

There's so many more reasons why Donny is loathed in America that I could share but you got the point. I'm sure you probably could think of some too.

Year-End Review: The Liar-In-Chief's Attacks Against the American Way 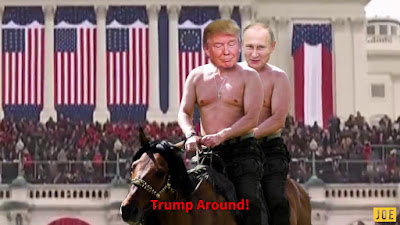 2017 Was A Year of Bromance Between Trump and Putin

All hail the Liar-In-Chief!

This year we were confronted with a president who has the most extensively proven track record of lying in presidential history.

The White House keeps claiming Trump is not a liar. That's a lie. You wanna know why?

PolitiFact found that only 17% of Trump’s statements are true.

I could go on, but why bother?

If you ever heard Trump make a speech that wasn't laced with lies, please share it with me. If you've watched TV and saw Trump speaking, you know he lies.

For the White House to stand in front of the country and defend Trump’s honesty, it demonstrates that no one working at the White House has a single shred of credibility.

Trump has done his best to discredit our entire intelligence network, repeatedly asserting the FBI is "in tatters."

Few people were fooled by his reasoning for attacking our intelligence agencies and judicial system. Trump fears his corrupt regime will be exposed and he'll be impeached, or worse.

Trump did manage to inflict a big tax scam upon the middle class before the year ended. He happily toasted his wealthy guests at Mar-A-Lago after signing the bill and said, "I just made you all wealthier!"

For the sake of space I won't go into detail on the rest of his democracy destroying agenda. Just a few dishonorable mentions:

Trump's war on immigrants to the USA have intensified.

Trump's acceptance of the alt-right has further divided America.

Trump's attitude towards women and sexual harassment is just another scar on a society where women are seeking to be treated equally.

Trump's mistreatment of the truth, introducing his own alternative realities, and calling our free press "Fake News" has further deteriorated the morale of a majority of Americans.

That's pretty scary for just one year. Let's hope that next year we'll see justice prevail and Donny run out of Washington on a rail! 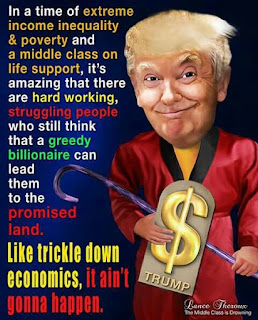 Looking back at 2017 is exhausting, and disappointing.

Our democracy has been under assault from a crazed autocrat that slithered into the White House in January.

Trump's war on democracy has effectively destroyed the "New Deal" that  president Franklin Delano Roosevelt rolled out after radical Republicans brought the country to it's knees and caused the stock market to collapse.

The New Deal responded to the Great Crash and the ensuing Depression by regulating business, providing a basic social safety net and promoting infrastructure in order to maintain a level playing field for all Americans.

By any measure, the New Deal was wildly popular, so conservatives sold their reactionary economic vision by enlisting white racism.

As the federal government promoted civil rights, they warned that an active government redistributed the wealth of hard-working, white taxpayers to African Americans, a “special interest” that wanted better treatment than everyone else.

From the moment our first illegal president stepped into office he followed an authoritarian playbook. He began by rejecting objective reality.

Then he turned over the government to his billionaire buddies. Despite Trump's campaign promises, he kicked the middle class under the bus.

Trump's individualist vision of destroying all the good done by the New Deal has unfolded so fast, people are still gasping in surprise.

He's also working hard to undermine the authority of special counsel Robert Mueller, whose job it is to determine what Trump's role was with Russia during the 2016 election.

Even though the New Deal's good work has been overturned by the wealthy it's important to understand that the damage doesn't have to be permanent.

Roosevelt purged our corrupt government in the 1930's after it was held in a stranglehold by the wealthy.

There's no reason to believe that a new president in 2020 can't reverse the damage he's done.

Christmas in America: What's Under Your Tree? 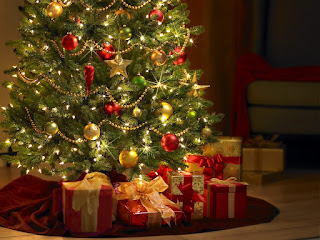 What did Santa Claus bring you today?

If you're a Trump supporter, don't be surprised if that sock you hung from the mantle is full of coal. After all he did promise to bring coal production back.

Liberals made it clear to Santa Claus that all they wanted for Christmas was to see Trump impeached. As you can imagine, they're very disappointed.

Santa did leave a gift (the kind that grows); the Russian/Trump collusion/ and Obstruction of Justice packages.

If you're one of the wealthy that benefited from Trump's Tax Scam, you got your gift early so don't bother looking under the tree.

Speaking of the wealthy, Trump's Treasury toad, Steven Mnuchin, got another (beside the Tax Scam bill) Christmas present early...someone dropped off a package of horseshit in the front of his house!

If you hoped to see Trump locked up for crimes against the people for your Christmas present, I suggest you hang on to that hope - you may get your present in 2018.

Christmas Eve Musings: On Peace and Goodwill To All 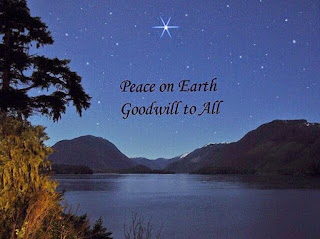 My favorite yuletide greeting is, "Peace and Goodwill To All."

I extend it to you now, even though I probably don't know you.

I don't care what race or gender you are. We're all brothers and sisters. Same species.

More than anything, I want to see a world at peace before I die. I want to know it's going to be okay for my children, and their children.

There's way too much hate in the world. But there's always hope. Each of us must keep the hope of better times in our heart year around. Not just for one holiday.

Reminders of how many good people there are in the world keeps me going. I had one a few days ago. A stranger emailed me after reading an article I wrote in 2013.

This stranger, whose name I prefer to keep secret, asked me for help in sending the remains of a North Vietnamese soldier whose leg bone (with carvings on it) was kept as a war souvenir, back to his family and country.

I hope the information I provided will help him accomplish this humanitarian mission. The souvenir wasn't his. It belonged to a friend.

As a Vietnam combat veteran, I found his email to be especially poignant. I saw some terrible things when I was there.

Things that will always haunt me.

This small act, by one man who believes there's too much hate in the world, gives me hope. I never stop looking for hope in this chaotic world.

I hope you don't either.

Merry Christmas! Peace on Earth and Goodwill to All!