Did you know that…

A quarter of the world's plants are threatened with extinction by the year 2010.

Thanks to Sci Tech-Science

‘Nautilus House’ is nutty but neat…

The structure that you are viewing was designed and developed by organic architect Javier Senosiain.

I’ve always been a fan of the Guinness Book of Records. It never ceases to amaze me what people will do to get in it.

In my dreams, I pretend I am an entry for writing and publishing the most Books sold worldwide!

“Manjit Singh, a 59-year-old security consultant from Leicester, England known as the "Ironman," on Thursday pulled a double-decker bus weighing more than eight metric tons over a distance of 21.2 meters with his hair.

The new record was set in central London to coincide with the fifth annual Guinness World Records Day, which organizers said prompted thousands of people around the world to set some bizarre benchmarks of their own.”

Photo via Reuters – People in swimsuits dance during an attempt to break the Guinness World Record for the largest group of people wearing swimwear.

'Pot' may help combat PTSD U. of Haifa study shows

I’m vaguely uneasy about comparing rats with people when it comes to PTSD. A lot of questions come to mind. Read the whole article (follow link) and see what you think.

"The results of our research should encourage psychiatric investigation into using cannabinoids." - Dr. Irit Akirav of the psychology department learning and memory lab.

“A University of Haifa study on rats has found that giving medical marijuana to those with symptoms of post-traumatic stress disorder can provide significant relief.

In addition, a pilot study on 20 Israel Defense Forces veterans and others with PTSD that was recently launched in various psychiatric hospitals is promising, but a full clinical trial has not yet been approved by the Health Ministry, The Jerusalem Post has learned.”

With the new movie "2012" imagining the end of the world as we know it, MSN reflects on pop culture's obsession with the apocalypse.

Nostradamus was a 16th-century seer (his day job?) who some say predicted the French Revolution, President Obama's election and other historic events.

But seriously, our planet can't last forever. In "The Life and Death of Planet Earth," two astrobiologists write that, in human terms, Earth is this old.

Apocalypse next: Later this month "The Road" will show moviegoers Cormac McCarthy's post-doomsday vision. Enjoy the trailer -- while you still can.”

While drinking my first cup of coffee this morning, I ran across this story.

The Swine Flu has been in the news throughout the year, but this is the first time I’ve seen holy water to combat it!

“ROME (Reuters) – An Italian inventor has combined faith and ingenuity to come up with a way to keep church traditions alive for the faithful without the fear of contracting swine flu -- an electronic holy water dispenser.” 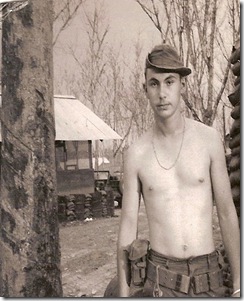 This picture was taken in February of 1970, when I was stationed in Vietnam. I was 19 years-old. (I turned 20 while in-country)  I was a Combat Engineer (31st Eng Battalion).

My specialty was Enemy Ordinance Disposal (EOD), but I also drove heavy equipment - like bucket loaders, as shown in the photo below. 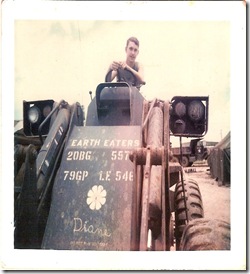 Looking at these photos today, I looked impossibly young and thin. Was I really that young once? I left Vietnam an old man in a young man’s body.

This Veteran’s Day I find myself thinking of my buddies who didn’t survive that hell in Vietnam. Some came home, like me, only to fall prey to PTSD. The casualty rate still continues today.

I recently read about how the military is basically blackmailing people who are locked up for going AWOL. The soldiers end up staying in jail for long periods of time (some for over a year) before their cases even go to trial.

Some of these AWOLs have already served combat tours and don’t want to go back. The authorities offer soldiers a way out of jail if they will agree to go to Iraq or Afghanistan. Blatant blackmail by a military that is running short of bodies to sacrifice.

I look at the record numbers of soldiers coming back from these wars with PTSD. Their numbers are overwhelming. The VA’s in need of a major overhaul to help them.

On this day to honor veterans I’m torn between remembering those who gave their all to this country, and the challengers our veterans face today. My heart is with each and every one of America’s veterans every day.

Don’t expect jingoism from me. I think war is wrong. I’m unhappy with the president, and the punks in the Pentagon who don’t want our protracted wars to end. Their reasons are dark, and colored with greed and mindless imperialism.

Instead of martial rhetoric for this day, I hope to see a Veteran’s Day when we are not at war with other countries. John Lennon’s song comes clearly to me this morning. Join me, if you will, in singing “Imagine.”

I’ve been following the health care debate (with millions of other Americans) and the passing of H.R. 3962 was a sell-out to the current insurance system. I like the fact that Kucinich voted against his fellow Democrats - setting ideology and party politics aside.

The Dems celebrated a hollow victory because this version of the health-care bill is unacceptable, and will get shot down if not heavily revised in the Senate.

Kucinich: Why I Voted NO

“We have been led to believe that we must make our health care choices only within the current structure of a predatory, for-profit insurance system which makes money not providing health care.  We cannot fault the insurance companies for being what they are.  But we can fault legislation in which the government incentivizes the perpetuation, indeed the strengthening, of the for-profit health insurance industry, the very source of the problem. When health insurance companies deny care or raise premiums, co-pays and deductibles they are simply trying to make a profit.  That is our system.”

One of my favorite Lakers is Kareem Abdul-Jabbar. I was surprised to see that he has a rare form of cancer this morning.

Apparently, it’s not the worst kind of cancer you can get, and chances of survival are good.

Kareem Abdul-Jabbar is being treated for a rare form of leukemia, and the basketball great said his prognosis is encouraging.

Read the story at Yahoo Sports

Technorati Tags: basketball hall of famer,Abdul-Jabbar,leukemia
at November 10, 2009 No comments:

Who says turkey’s are dumb?

With Thanksgiving coming up the smarter turkeys are already practicing their imitations of other animals….

The problem with legalizing pot is…

Suicides in the downturn raise worries about recession’s real cost

Coroner John White is presiding over a sad tally in this northern Indiana county, tracking rising numbers of suicides he believes are linked to the lingering recession.

Read the whole story at msnbc

A look at seven subjects that seriously tick people off

I’m back…it’s time to start posting stuff again. I wonder if you missed me as much as I missed blogging?

Remember comedian George Carlin's 1972 “7 Dirty Words” monologue? It's still controversial, but every one of those words can now be heard on cable TV. I wondered what words would cause such a controversy today?

Then it came to me. Not words; subjects. The following subjects are guaranteed to cause controversy. If you don't want to start a heated argument, don't mention any one of them. Of course, if you're bored with a dull conservation and looking for a stick to throw in the fire, then toss in one of these subjects to warm things up. Click here to read the seven subjects.