Re-enacting the Vietnam War...the stupidist thing I ever heard of! 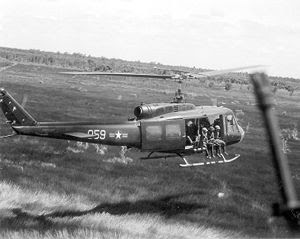 By Dave Stancliff
It’s never made any sense to me why someone would want to re-enact a battle, or a war.
War is not something to be proud of. It means that all chances of reasoning have failed. It means that innocent civilians have been killed. It means that soldiers on both sides are killed, or maimed for life physically or mentally.
War is chaos. Normal ways of thinking have to be modified so that a person can survive. Killing others before they kill you helps justify your actions. The instinct to survive is strong, and people will often do things that they would never have considered before. Like kill women and children.
When I read an article about military enthusiasts re-enacting the Vietnam War I was stunned. I’ve known for a long time that re-enactors having been doing the Revolutionary War, the Civil War, and even the Spanish-American War. But Vietnam?
I suppose I can see the public’s interest in watching battles that happened over 100 years ago. What people wore, ate, and types of weaponry, is somewhat of a history lesson. But when the guns and cannons blaze and the re-enactors start falling in mock death, the whole thing becomes strange to me.
Is this a celebration of death? Is this really a history lesson, or just a chance for a bunch of guys and gals to dress up in period costumes and pretend to kill each other? There’s a general blood lust that lurks in crowds when scenes of violence are glorified. Secret desires to see what it would be like to kill another person stalks many viewers.
The ancient Romans were known for their bloodlust. Emperor’s had to satisfy the public by giving them gore masquerading as entertainment. There were no re-enactors in those days. Slaughter and mayhem were part of their normal lives.
America today reflects those bloody values in our sports and love for war. With the addition of mixed-martial-arts for both sexes, we see people "nearly" killed everyday. Little or no rules apply. Like the gladiators of old, we hold up our violent sport stars like idols, and worship them slavishly.
There’s no winners in war. In the end it’s just a feast for the grim reaper. We live with wars raging around the world in this new millennium, very much like the ancient Romans. Imperialism is alive and well in the USA.
I can’t imagine people watching a representation of a war that only ended 30 years ago. There’s thousands of survivors from both sides still dealing with the physical and emotional damage from that nasty little undeclared war. It’s not like seeing crude weapons from another era. Their still with us today.
The clothing that the Vietnamese survivors wear today is the same they’ve worn for centuries. The American veterans clothes from that era is also practically the same. There’s not much to be learned from that, is there?
So why the hell do people want to re-enact a shameful period of our history when we bullied another country for no good reason? We all know that for sure now. There’s no excuses to say what we did was righteous. It was wrong. All the more reason not to glorify it with some outdoor theater of the absurd.
The re-enactors will tell you it’s history and that they are honoring those that fought and died there. As far as I’m, concerned that’s bullshit! You don’t honor anyone by playing war games. What’s really happening is just another excuse to glorify war. And there’s always those folks who wished they had been in the military and now they have a chance to pretend they are.
Some of them might have been in the military but never saw action, and the opportunity to realize their dreams of killing becomes closer to reality. What’s next? Are re-enactors going to be doing the Iraq and Afghanistan wars before they even end?
Or, will they wait for a couple of decades and then re-enact our shameful grab for oil from those two nations?
As It Stands, war will always be wrong, regardless of how it’s portrayed.
at August 20, 2009 3 comments: