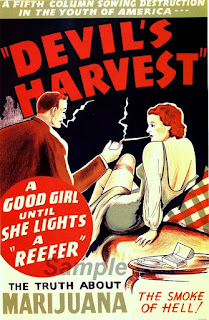 "Nothing makes sense before coffee." -Unknown

Everybody is writing books these days.

Just about every person that has left the White House in the last couple of years wrote a "tell-all" account of their experiences there.

We're not talking literary masterpieces either. The only thing going for them is the sensational claims they make. Kind of like the author I'm going to introduce to you now...

One author, Alex Berenson, has decided to double down on sensational (and unverified) claims about the dangers of marijuana in his new book "Tell Your Children: The Truth About Marijuana, Mental Illness, and  violence."

He recently promoted his book in a New York Times op-ed that blames pot for "sharp increases in murders and aggravated assaults," purportedly observed in some states that allow recreational marijuana use. 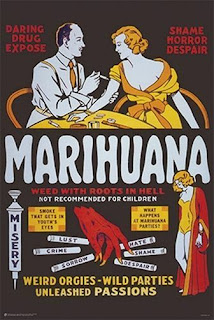 The book manages to reprise the stupidity of the 1930s, when there was virtually no scientific data on marijuana, and ignorant and racist officials publicized exaggerated anecdotal accounts of harms and were believed at the time.

After hundreds of studies disproving those crazy claims 90 years later, there is no excuse for Berenson exaggerations, or the foolish conclusions he drew.

Evidence from research tells us that aggression and violence are highly unlikely outcomes of marijuana use. When was the last time you saw a story about a crazed pot-user attacking a school or church? 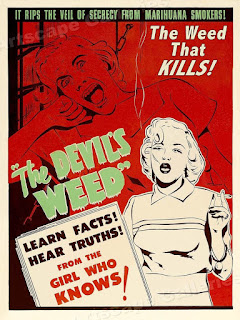 Based upon laboratory research, during which thousands of doses of marijuana were given to people - carefully studying their brain, behavioral, cognitive and social responses - no research participant became violent or aggressive while under the influence of cannabis.

What has been determined is that the main effects are contentment, relaxation, sedation, euphoria, and increased hunger.

I'm really curious who Berenson's targeted audience is. Based upon the amount of disinformation in it. I suspect it's a guide for the alt-right and the Republicans that identify with Trump.

The only thing I recommend about this book is it's a great example of how partisan lies are publicly shared for a narrow audience of idiots.

Playtime is Over Trump: The Ides of September Looms 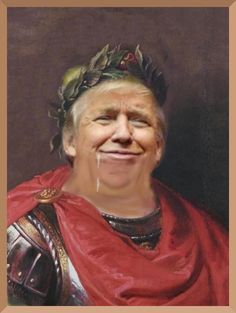 "Coffee: ok, not really a vegetable, but without it I turn into one." Unknown

From all accounts, I didn't miss much during yesterday's debacle in front of the Lincoln Memorial, billed as a Salute To America.

Pundits aren't writing about a 4th of July oratory for the ages reminiscent of a speech by Julius Caesar.

Trump's attempt at telling history led to claims of airports during the Revolutionary War, and a stiff defense of Ft. Henry then...when of course, the Ft. Henry thing (rockets in the air, etc.) happened in the War of 1812.

The water-soaked affair will probably be best remembered for the presence of the Baby Trump Blimp and the Trump on his Thrown Blimp, both of which bobbed happily throughout

Playtime is over for Trump. Between now and the end of September, he has to come up with a budget, or we'll have another government shutdown.

That would be twice in one year. Someone needs to check and see if that's another dubious record set by the orange anus.

1) The GOP senators can't get Trump to sign on with their budget plan.
2) Trump doesn't even know what he wants.
3) Republicans are baffled by what Trump wants (the goal post keeps moving)
4) No one's asked what the Democrats want.
5) Trump doesn't care what the Dems want.
6) Any bipartisan agreement could be vetoed at the last moment by our precocious man child Trump.

Caesar ignored the warning about not going to the senate on the Ides of March, and we all know how that turned out.

I've got to think that two shutdowns in one year is not a ringing endorsement for a smooth government. In the very least, it shows chaos in the administration.

Another shutdown this fall will be considered more evidence of his incompetence.

A Celebration for Trumpies: 4th of July Morphs Into 'Trump Day Event' 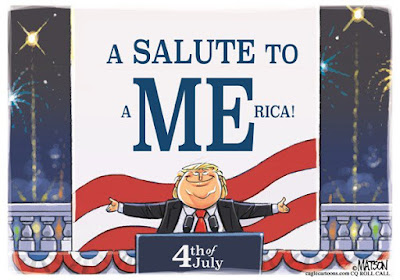 "Hand over the coffee and no one gets hurt!" - Anonymous

I won't be watching the 4th of July celebration in Washington DC today. It would be too painful.

Our wannabe dictator has co-opted the holiday that was once for all Americans, and made it his own.

He's managed to turn this year's 4th-of-July celebration into a partisan rally, complete with a special viewing section for friends, campaign donors, RNC bigwigs, and his family.

This narcissistic move has motivated Trump haters to protest at the event. The Trump Baby Balloon is flying today, although partially grounded because officials wouldn't let the organizers use helium - forcing them to just use air.

Trump's minions saw to it that all of the organized protests will be out of his line of sight. An act reminiscent of covering the name of the USS John McCain, a Arleigh Burke-class destroyer, when he was in Japan because it offended him.

The best selling souvenir is t-shirts, that are going like hotcakes at his bigly event are being offered by a veterans group. They have a photo of John McCain, war hero on on the front.

I'll still be celebrating our country's founding locally. The only difference this year is, I won't be watching a traditionally non-partisan event morphed into a day for a wannabe dictator.

One More Tradition Crushed: The Day That 4th of July Became a Partisan Event 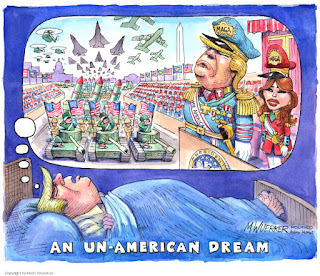 I had some dreams, they were clouds in my coffee. -Carly Simon

I'm 69 years-old, and have never seen a partisan 4th of July event.

That streak is going to end tomorrow, when Trump turns our most patriotic holiday into a campaign rally for his friends and family.

Trump is promising this 4th of July will be like no other in our history. He's right about that.

There's a reason none of Trump's predecessors in the White House pulled this nakedly partisan stunt before. They wanted the holiday to be for ALL AMERICANS...not just for a fringe minority like the freaks who follow Trump.

Here's the thing; it's important to know the difference between patriotism and nationalism. It is a fine line, but a crucial one.

According to Merriam Webster, "Patriotism is a love for, or devotion to the country. Nationalism is a sense of national consciousness exalting one nation above all others and placing primary emphasis on promotion of it's culture and interests as opposed to other nations."

Trump and his minions are claiming that those who don't go along with his personal show of power aren't patriotic. In Trump's tiny excuse for a brain, those past presidents were unpatriotic because they didn't get involved and put on a partisan rally.

Then there's Trump's frigging parade. Every since he saw a military parade in France last year, Donny has been lusting for a personal parade to show off HIS POWER.

America is stuck with a mean little toddler camping out in the Oval Office who stays busy with his toxic Twitter account and his ridiculous demands.

Cadet Bonespurs realizes the differences in his planned show. He just doesn't give a damn who it bothers, or insults. The orange narcissist is realizing his boyhood dreams when he played with little plastic soldiers and tanks.

Just a quick example of how clueless the orange ape is. He's telling everyone who'll listen that he's going to have some tanks sitting on the National Mall. He even boasted that there will be brand new Sherman tanks there.

For the record; we quit producing Sherman tanks in 1957. 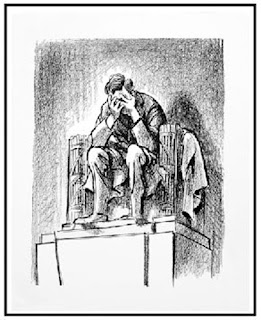 The part that is going to be the hardest to stomach is when Trump spews his shit from the steps of The Lincoln Memorial.

That blasphemy will probably have Lincoln rolling over in his grave.

I only have one hope that this event may get postponed.

If there is a God, then there's going to be thunder and lightning as the heavens open up and weep! 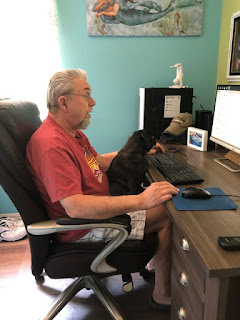 "What goes best with coffee? Another cup of coffee." - Unknown

It's time for me to take a few days off and recharge my batteries.

While I'm gone, I hope you'll check out my archives from past posts.

I created this blog in 2008. It's been a long and strange journey (thank you Grateful Dead). I hope many more years are ahead for this opinion platform.

I also have another blog - The Creative Chronicles of Dave Stancliff - which is fiction blog. Flash fiction, essays and poems.

May the wind be at your back, and the sun always shine above you...