“I think it's time we stop, children, what's that sound
Everybody look what's going down…”

In our noisy world the lack of sound can be golden.

You might think that a library reading room or well-insulated basement is a quiet place, but compared to the anechoic chamber in Microsoft's audio lab, they're about as quiet as a jumbo jet.

The chamber, housed in Building 87 on the company's Redmond, Washington, campus, was recently verified by (who else?) Guinness as being the quietest place in the entire world, reaching an eardrum-bending -20.3 decibels. (Source)

Microsoft and others use chambers like this to test equipment for noise levels, to provide a perfectly silent environment for training voice recognition, and so on.

You can learn more about sound ratings and the B87 anechoic chamber at Microsoft's website.

His hammer – Mjolnir – can not be picked up by just anyone. They have to be worthy – like Thor. As far as I know, the hammer has never found someone else worthy enough to fling it…but that’s another subject.

Enter…Allen Pan, aka Sufficiently Advanced on YouTube, who decided to replicate Mjolnir. The guy is an electrical engineer and pretty darn clever!

He used powerful magnets, and a microwave oven transformer electromagnet in the head. This creates a very strong magnetic pull, strong enough that the hammer, when placed on a metal surface (that can't be lifted, such as a locked manhole cover), feels too heavy to lift.

So how does Pan lift it?

The handle is attached to a capacitive touch sensor, which in turn is attached to an Arduino Pro Mini and a solid state relay, which serves as a switching device. As soon as someone grasps the handle, the electromagnets switch on, attaching the hammer to the metal surface.

The hammer can be turned off via a fingerprint sensor keyed to Pan's thumbprint. When Pan grasps the hammer, the magnets switch on. When he moves his thumb over the sensor, it switches off again, allowing Pan to lift the hammer.

Apparently Pan has a sense of humor and took his hammer to Venice Beach, California, and put it on a manhole and challenged people to pick it up.

All Pan has to do now is harness lightning (it shouldn’t be a problem for an electrical engineer) and train his hammer to come back to him when he throws it!

Lower gas prices this year has been good news for the American consumer.

But, those low gas prices are going to take an unexpected toll on over 70 million people, more than one-fifth of the nation's population, next year.

The main reason for no benefit increases next year for millions of people is…believe it, or not, low gas prices.

By law, the annual cost-of-living adjustment, or COLA, is based on a government measure of inflation. This year, because gas prices have dropped, no one will get a cost of living increase in 2016.

That affects retirees, disabled workers, and spouses with children, who get Social Security benefits.

That also goes for 4 million disabled veterans, 2.5 million federal retirees and their survivors, and more than 8 million people who get Supplemental Security Income, the disability program for the poor. (Source)

It seems ironic to me that when something good happens for consumers in this country, it comes with a caveat.

Pass the Burrito Challenge and Get 10% of a Mexican Restaurant

Although I have no experience in the restaurant industry, I’m thinking about becoming a partner with Don Chingon, a restaurant in Brooklyn.

Not so fast. You could do the same thing, if you wanted. It’d help if you had a huge appetite.

All you have to do is eat a 30-lb burrito and drink a ghost pepper margarita in under an hour and you’ll own 10% of Don Chingon’s Mexican restaurant.

BTW – no bathroom breaks or discharge of bodily fluids allowed during that hour. The restaurant also will not accept responsibility for illness or death incurred while participating in the challenge.

You should also know why George Shea, a partner in the International Federation of Competitive Eating, calls the contest a "great PR stunt." He’s sure no one on the planet can meet that challenge.

Meet Florida’s Candidate for US Senate: He plans on Starting a 2nd Civil War!

So, you thought Donald Trump was a crazy political candidate. You haven’t seen anything yet.

Meet, Augustus Sol Invictus, an Independent running for a US Senate seat in Florida. He believes he was born to start a 2nd Civil War in America.

Even Trump can’t top that thought.

Invictus has repeatedly vowed that it is his destiny to start a second civil war in America.

In a 2013 memo to his colleagues, he wrote, “I have prophesied for years that I was born for a Great War; that if I did not witness the coming of the Second American Civil War, I would begin it myself.” (Source)

Trump’s campaign slogan of Make America Great Again may be misleading, but when you take a look at Invictus’s campaign logo you’ll find yourself blinking in disbelief. It’s nearly identical to that of Benito Mussolini’s. He also likes to display swastikas in his published campaign materials.

Crazy enough for you?

But wait! There’s more: He has expressed support for a eugenics program, which would sterilize, euthanize or forcibly abort 'the weakest, the least intelligent, and the most diseased.”

If that doesn’t convince you he’s a true Loony Tune, the US Senate hopeful has admitted that he sacrificed a live goat and drank its blood. He’s a Pagan by the way.

FYI: Invictus has a frequently asked questions section on his website .

Sound’s like the Republican and Democratic candidates in Florida seeking senate offices are really going to have a challenge for the “crazy vote” in that state.

Whatever you do, don’t say… 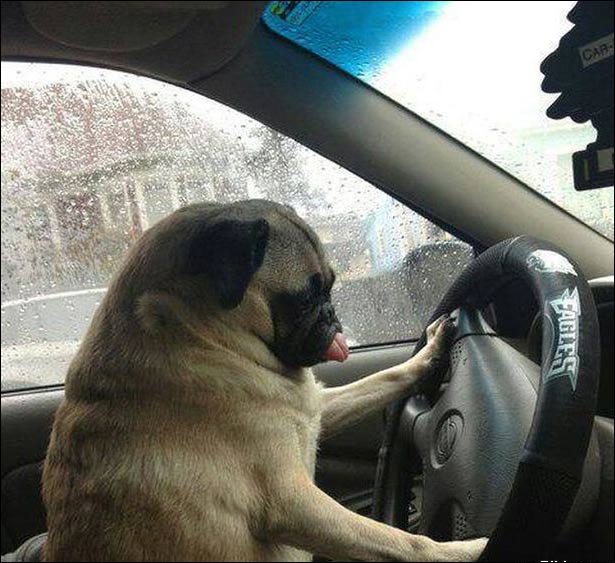 Whatever you do, don’t say…"Who was chasing me? You're slow as ***!" like this DUI suspect did after claiming his dog was driving his car.

Whatever you do, don’t say… “I left town because Hollywood Star-Wackers were hunting me,” and expect authorities to forget you committed a felony and had been hiding for five years when you got caught crossing the Canadian border into Vermont – like actor Randy Quaid did!

Whatever you do, don’t say…"Just give me some (expletive) bacon-jalapeno mac and cheese." A University of Connecticut student faces criminal charges over a confrontation with a campus food court manager who wouldn't let him buy macaroni and cheese with bacon and jalapeno peppers.

Whatever you do, don’t say… “Officer, come over to my house quick. I’m too high on marijuana!” like one 22-year old Youngstown, Ohio, man did recently and not expect to be the butt of jokes for the rest of your natural life!

Whatever you do, don’t say… “I’m a federal agent and I need a free pass to catch a fugitive at this event (Comic Con in Salt Lake City),” and actually just be a dweeb trying to scam a freebie.

Whatever you do, don’t say… “There’s a bomb here,” at your workplace just so you can get fired. There’s got to be an easier way!

Americans are sick of the corporate masters that rule them.

Skepticism of corporate power is what the American Revolution - or at least the event that sparked it - was all about, which makes the latest polling about money in politics anything but surprising.

According to Bloomberg Politics, a full 78 percent of Americans think we should overturn the Supreme Court's 2010 Citizens United decision that opened up our election process to floods of corporate money. This isn't, by the way, a situation where a bunch of Democrats are tipping the scales.

Money in politics often gets painted in the media as "liberal" or "progressive" issue, but this new Bloomberg poll shows that Americans of all political persuasions overwhelmingly oppose Citizens United.

Eighty-three percent of Democrats want to overturn it, as do 80 percent of Republicans and 71 percent of self-declared independents.

The ever-more-concentrated corporate media really don't want to discuss Citizens United or the public's overwhelming desire to overturn it. In fact, even though our TV networks have spent hours breaking down every single Donald Trump poll, they've so far completely ignored that amazing Bloomberg study on opposition to Citizens United. And I mean completely ignored.

Maybe there's a good justifiable, journalistic reason for this. Maybe the fact that Americans hate Citizens United is so obvious that the mainstream media don't think it was worth reporting on.

The big open secret about Citizens United is that the mainstream corporate media support it. More money in politics means more money spent on elections ads, which, of course, means more money for the corporations that run the major news networks.

But luckily, the American people are figuring out what's up. If the rise of Bernie Sanders is any indication, they're more than ready to take part in another political revolution against corporate power - just like the one that founded this country 239 years ago. (read the full version here)

Peto's Paradox: Why Don’t Elephants and Whales Get Cancer As Much As Smaller Animals?

Researchers have long wondered why Cancer is much less common in elephants than in humans, even though the big beasts' bodies have many more cells.

Peto's paradox refers to the fact that large animals including elephants and whales, have comparatively low cancer rates even though they have many more cells than smaller species.

Elephants' cells contain 40 copies of a major cancer-suppressing gene called p53, two teams of scientists report. Humans have just two - one from each parent. The gene helps damaged cells repair themselves or self-destruct when exposed to cancer-causing substances.

The findings aren't proof that those extra p53 genes make elephants cancer-resistant, but if future research confirms it, scientists could try to develop drugs for humans that would mimic the effect.