Is Biden's Habit of Trying to Compromise with Republicans Harming Democracy? 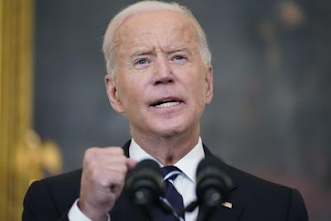 Disclaimer: I really enjoy reading Chauncey DeVega's opinion pieces in Salon, even if I don't always agree with him.

In an eloquent article, Chauncey DeVega praised President Biden, but thinks he's a patsy when it comes to dealing with the current Republican party.

DeVega asserted that Biden is too quick to seek "compromise" with what he sees as Fascist-Republicans. Fair enough. But let's look beyond suggesting there's no hope in compromising in politics.

If Biden were to "get tougher" with Republicans and spend his valuable time attacking them daily instead of the numerous challenges facing the nation, where would we be now?

Would we be this far in successfully battling the pandemic that has staggered the world?

Would we be in the place where nearly all the jobs lost since 2020, are back? See the February jobs report.

Would the unemployment rate be lower than the expected projections? It was 4.0 percent in January. Now it's 3.8 percent.

Make no mistake. I'm not saying everything is Jim Dandy and that the government is operating like a well-oiled machine.

In DeVega's view Biden's willingness to compromise with Republicans translates into complete capitulation.

Maybe so. Of course, there's no room to negotiate once you accuse the other party of being Nazi's. In anyone's book, those are fighting words that will extend the war between Democrats and Republicans.

To be sure, it's the American public that's taking a beating because our politicians are more concerned about holding onto their jobs than faithfully serving those who elected them.

Because the Trump-Republicans are dedicated to damaging our democracy and installing a dictator, they are a very real threat than needs addressed.

(For the record - I admit to irrationally wanting to wage all out medieval warfare against Trumpies and ignoring everything else! That's why it's good that I'm not in charge.)

The rest of the spineless Republicans who meekly submit to the crazies should be the target that Democrats use to divide the failing GOP. Don't give up on those cowards because someday the worm could turn, and the cult of Trump could collapse.

I admit that the Democrats could appear to be weaker when compared to the all-out propaganda assault in media platforms by Fascist-minded Republicans willing to ignore reality.

Looks can be deceiving, however.

I think it's a mistake not to try and compromise. Force doesn't always equate to being right.

Anyone who thinks the Democrats have rolled over and are meekly accepting their fate hasn't been paying attention. That includes DeVega whose anger is evident in the article.

I would remind everyone there is a Jan. 6 Select Committee that's exposing those Fascist-Republicans DeVega talks about. Not to mention there's numerous lawsuits filed against Trump and his cronies regarding their assault on the nation's Capital.

With the massive amount of evidence compiled by the committee we can reasonable expect there will be an accounting for the coup attempt and collateral infractions by everyone who tried to steal the 2020 election.

I realize there's a primal fear Trump will somehow come out unscathed by the courts, but odds are something is going to stick if you look at the whole picture.

Democrats have the advantage of speaking truth to the lies perpetrated by the GOP as reality asserts itself in the mainstream national dialogue.

By suggesting, as DeVega opined, that Biden is not the fighting champion to save democracy he's undercutting him by ignoring his capacity for empathy and leadership qualities like listening and compromising.

That Biden has taken the opposite approach that Captain Bone Spurs (aka Trump the bully) did shows his maturity and ability to lead in a crisis.

Biden has shown that he can respond forcibly to protect Democracy. Take a look at how he organized NATO and the European Union to resist Russia's invasion of Ukraine.

If Biden is guilty of anything it's that he honestly thinks he can restore America's political order. Unfortunately, it's the 21st century, not the 20th century.