By Dave Stancliff/For The Times-Standard
I enjoy living behind The Redwood Curtain. National trends usually take time before they penetrate our backwoods paradise in northern California, but that’s okay. In Humboldt County we lead a slower way of life for numerous reasons.
To name just three; fewer people, only one major highway that seldom has traffic jams, and we don’t have all the entertainment and shopping found in more populous part of the state.
When I recently discovered a growing phenomenon called “Cash Mobs” it was one of the few times I regretted our isolation. I quickly recovered however, and am thrilled to share with you what they’re about.
The first took place in August at City Wine Merchant in Buffalo, N.Y., organized by Chris Smith, an engineer who also writes for ArtVoice, a Buffalo arts blog. Since then, the idea has spread to cities like San Diego, where cash mobbers converged recent 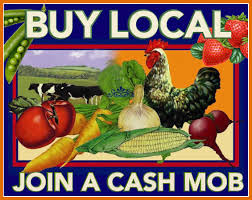 A cash mob is the modern equivalent of a community barn-raising, like those in the old west when a community came together to help one of its members build a house or barn.

The story that inspired me to pass on this new trend started on a stretch of Chapman Road in Knoxville, Tenn., where locals rallied to help Emery's 5 & 10 store (photo below left). It’s believed to be the oldest family-owned five-and-dime store in the U.S.
The recession

had been hard on the store, and when a bridge construction project diverted traffic away from it, the store was deserted, according to Knox County Mayor Tim Burchett.

But fortune smiled when Mayor Burchett watched late-night TV and saw a report on "cash mobs" — flash mobs that organize to bring customers to struggling locally owned businesses.  He told NBC station WBIR, “A light bulb went off. Somebody was doing something at a hardware store in the Northeast, and I just thought: 'Dadgum. We ought to do that right here in Knoxville.’”
A light bulb went off for me too, when I read this. Why can’t we have “cash mobs” here to help our small businesses? I’ve always supported the local economy in every way possible, and I’d love to see some of our struggling businesses get a break.
It’s easy to do. There are actually unofficial rules. They’re available at Cash Mobs blog. I highly recommend visiting the site if you want to know how an event like this can be organized.

On March 24, 2012, Cash Mobs blog is calling for National Cash Mob action. The idea is to organize mobs in small communities across the country for the day. It can be all day (like Chagrin Falls, Ohio plans) or more Flash Mobbish (like Bellport, Long Island, New York).
I’m not suggesting this is a long term solution, but it could mean staying open when the wolf is at the door. It might make the difference to a Mom & Pop store and buy time to come up with a strategy to stay in business.
I’m appealing to anyone who wants to show their appreciation for our lifestyle to help the local  business community and organize a Cash Mob. How about a community group? I’d think something like this would fit in with service organizations like Rotary really well. 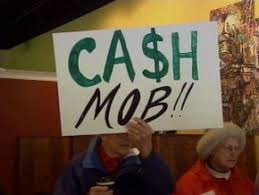 I seldom ask readers to get on any bandwagon. I’m not a “joiner” myself. Yet, there are times when I’ll ask readers to support a cause. Supporting local business is one of those times.
It’s no secret. The Great Recession has staggered the business community on the north coast. Take a stroll through the Eureka Mall to get a feeling for the impact. Empty storefronts outnumber active businesses. Look around where you live. Is there a Mom & Pop business you think deserves help in these troubled times?
As It Stands, I’d also like to give a shoutout to Humboldt bloggers - ‘What do you say? Would you like to make someone’s day?’

Here’s some websites that have picked up this column: