Good day blog buddies! When I heard that a 3-foot penguin was being knighted in Scotland the other day my muse went wild and the result was a new column for The McKinleyville Press. In a nutshell, my pug Millie felt she was more deserving of some royal title than a penguin.

After all, she pointed out to me, she's descended from a long line of Royal Chinese lapdogs. I could not argue with that. She wanted the Chinese do do some sort of ceremony honoring her, but it turned out they were too busy with the Olympics. Instead I contacted one of America's "royal families" and the results were pretty funny.

I let you know when Jack publishes it.

"Does Millie deserve to get some sort of royal recognition? If so then what would you suggest?

So it's finally friday...

After battling with computer gremlins this morning for two hours I'm glad to say I've overcame the creatures and am back online. The problem actually turned out to be a loose connection.

I want to remind everyone that HSU will be celebrating the new opening of the V.E.T.S program on Aug.28.

Here's a link for more information about the program.

I don't know about you but my week has flown by on the wings of my usual muse...writing. Working on columns, my blog, and new book, is making the days fly by. That doesn't even count my other daily activities that range from chief dishwasher to being the manager of four Fantasy Baseball teams.

This sure has been a wild week internationally with the Olympics and the invasion of Georgia. If you believe in God then pray for those poor civilians who are getting caught in the crossfire of this terrible invasion. Russia is once again the Bear That Roars and old imperialistic aims have been revived. Watch as the other republics - like the Ukraine - get invaded too.

"What can the US and the world do to stop Russia's aggression against it's struggling democratic neighbors?

Make no mistake, we're locked into a deadly arms race with China and it's happening in Cyber Space. There were 79,000 attempts to break into American computers in 2005, including the Army's 101st Airborn and 82nd Airborn Division, and the 4th Infantry Division. This year those attempts have increased.

Beiijing is trying to achieve "electronic dominance" over it's global rivals by 2050, particularly the US, England, Russia, and South Korea. What's really alarming is that the Chinese military manuals say the US is the country they are most likely to go to war against!

Our "chimp-in-charge," President Bush, has said that he was going to talk with the Chinese about this while he was at the Olympic Games. So far, I haven't heard a word about it.

How dangerous do you think these cyber attacks are and what do you think we (as a country) should do about them?

It looks like Jerome R. Corsi,PH.D. is back to his dirty tricks with a new book called "Obama Nation," in which he frankly said he wrote to attack Obama (and damn the facts) and make sure he doesn't get elected. Critics are already pointing out factual errors, but Corsi who was the co-author of "Unfit for Command" another attack book on a presidential hopeful John Kerry, really doesn't care. Mere facts don't bother this man. See Swift Boat For Veterans for further proof of his low-road attack philosophy.

THREAD: How do you feel about this kind of low-down journalism?

A link for readers

For those readers who didn't see my last column on animal activists.

Hillary Rodham Clinton may not have gone with all of Mark Penn's suggestions during the primaries, but she did use one of them. Penn, a longtime pollster and strategist for Clinton's bid for the Democratic nomination for President, wanted Clinton to make an issue of Obama's "diverse, multicultural" upbringing.

He suggested, in a memo titled "Lack of American Roots" that Obama's, "roots to basic American values and culture are at best limited."

Fast forward to today and look at the Campaign that McCain's handlers are running. They have taken a cue from Penn's notebook, and are attacking Obama on nothing more than "he's different." McCain's campaign is taking the low road where Clinton left off, and he's trying to portray Obama as some sort of star - like Paris Hilton and Britney Spears - who is only an air-headed entertainer/speaker.

Forget about real issues like the economy and the two wars we're embroiled in, the McCain campaign would rather run a mudslinging contest and to rely on Jingoism to carry him to the White House.

Is McCain's strategy going to be his key to the Oval Office?

Presidential pardons are a bad idea

For our commander-in-thief, bumbling along in the final days of his occupancy in the White House, there is one last perk that he'll get this December.

Every lame duck president has taken advantage of this blanket pardon  idea since Washington pardoned the men who started the so-called whiskey rebellion in 1794.

My point? Abuse of power. There's been times, as in President Carter's case, that the pardon really was warranted. But there also has been numerous cases of really bad people getting a pardon like Marc Rich (who by the way fled the country and was pardoned while living overseas.)

Should the practice of presidential pardons be stopped?

These guys are wondering when the next As It Stands column is coming out in the Mack Press? 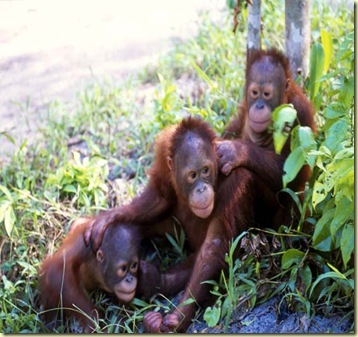 Another week is underway blogger buddies and today's topic is about forced recycling.

He floated the idea of having mandatory recycling, like some other cities do, and went one step further, creating the first composting law in the country.

Customers will get colored bins and God help them if the coffee grounds are found drizzling through the wrong colored bin! Gavin is proposing a $1,000 fine for violators. I suppose they will also have to create "trash police" to enforce such a draconian law!

...then it's time for As It Stands! Today's column deals with animal activists who go too far in their zeal to stop animal research.

They throw fire bombs at people's houses and cars. What's the difference between them and any other terrorists? None, in my opinion. I'm kinda funny about things like that.

When someone physically attacks others in the name of some ideology they are taking the wrong approach to solving their difference. Might does not make right. Terror does nothing but set the table for death.

I did not pick on all animal groups that are actively seeking better lives for animals. I picked out ALF (Animal Liberation Front) to highlight how some can be so negative. I offer the reader their full view by providing a link to their press office. I think some people are going to be surprised at what they read there.

"Do you think groups like ALF are really helping the cause for animals?"