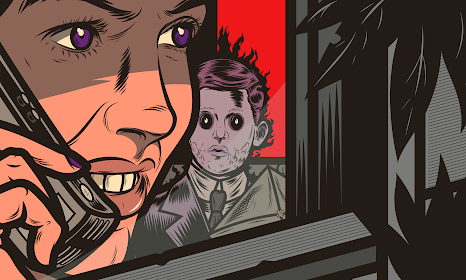 Welcome to the Republican National Committee Alternative Reality Media Club. Today's launch of Fake News Hour is expected to become a viral hit for extremists throughout the country.

In the first podcast Florida governor Ron DeSantis owns the libs by creating a story about elementary students being told by teachers that if they were born a boy, they can still be a girl. And vice versa.

Wow! How about them apples?

DeSantis called out those bad apple teachers in Florida and across the nation and told them to repent or school boards will have to try them for crimes against children.

The Republican dominated state Senate and House have introduced a bill that says convicted teachers can get anywhere from the death penalty to life in prison with no parole.

My Pillow Guy Mike Lindell has come up with evidence of fraud in the upcoming Republican primary for governor supporting candidate Kari Lake's assertion of fraud before the voting has begun.

In a debate last week Lake warned the other candidates to stop cheating and that her opponents will use the votes of dead people to try and defeat her.

But her real bombshell came when Lindell caught Republican Maricopa County Recorder Stephen Richer asking voters to use a new quick-drying pen instead of their regular black or blue pens.

Lindell's election experts discovered the "new" pens were made in Venezuela by Hugo Chavez who was bankrolled by President Biden's crooked son Hunter.

Lake, who has been trailing in the polls, expects a big bounce after the shocking revelation is announced.

Donald Trump (who is still president), endorsed Lake at a rally earlier this month and called her up on Thursday after hearing about the poison pen conspiracy and her excellent response.

That's all for today folks. Have a MAGA day!

Why Do Republican Lawmakers Treat Veterans Like Bargaining Chips?

Republicans don't care about our military personnel and the proof is in their voting history.

Once again Republicans officially delayed a veterans' bill with a filibuster. "They chose yesterday to rob generations of toxic-exposed veterans across the country of the health care benefits they've earned," said Senator Jon Tester, who added, "It was a total eleventh-hour act of cowardice."

It's hard to square how much Republicans give the military industrial complex benefiting the Pentagon, and how little they care about the rank-and-file who put their lives on the line to protect democracy.

Veterans get no respect from Republicans. Yesterday's filibuster was just the latest example of that. What's really chickenshit is why Republicans lawmakers refused to help out veterans.

They were retaliating against a newly revived Democratic plan to curb climate change by blocking a bill they previously supported providing healthcare to veterans of burn pits, and Agent Orange.

So, in summary the GOP uses veterans as bargaining chips for their negotiations. History proves that. The Republicans hold veterans' healthcare hostage to forward their toxic ideology.

A longtime advocate for veterans' rights, Jon Stewart said it the best...

"Congratulations... You successfully used the Byzantine Senate rules to keep sick veterans suffering!!!! Kudos! I'm sure you'll celebrate by kicking a dog or punching a baby... or whatever terrible people do for fun!!!" 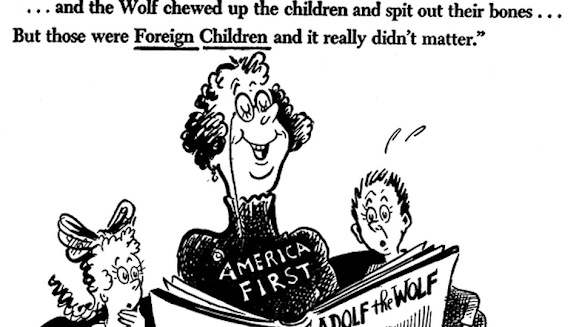 I sometimes think about Rodney King and the LA riots and how he pleaded with the public during a June 17, 2012, press conference asking the question "Can we all get along?"

If anything, Americans are fighting more among themselves in a societal war to divide this country in half.

No one should be surprised, however. As a longtime and ongoing student of American history I've yet to find a period in the nation where Americans all got along. Even wars against foreign nations only partly unify the country. We're never "all in" on anything.

It's apparent that individualism far outweighs the common cause. We are proud, maybe too proud of the fact we're the only country in the world with very little gun control and laws which result in mass shootings almost daily.

Millions of Americans simply don't believe in the laws of the land and flout them constantly with anarchist alternatives. The Republicans still paying homage to the former president are trying to turn reality on its head with the Big Lie.

From the beginning of this democracy we enjoy, there were divides that still exist today. One is that city slickers just don't get along with rural folk. They're values are just too different.

I've always been amused with writers who talk about the great melting pot this nation is. From the day that white Anglo-Saxon Christians arrived in America and set up colonies there's always been a societal pecking order with them on top. The melting process is still trying to take hold.

Immigrants are reviled and white nationalists have united with Republicans to seek an authoritarian government free from outsiders.

We've fought a Civil War but the traitors who lost are still revered in Southern states.

America has survived the 9/11 attacks, the Oklahoma Federal Building Bombing, Waco, and hundreds of other assaults upon our society without unifying and moving forward as a United States of America.

What would it actually take to bring all Americans together in a common cause?

The only thing that comes to my mind is if we're invaded by extra-terrestrial beings Americans might unite to survive to save their collective asses.

Still, I wouldn't bet on it.

New Heights of Hypocrisy in GOP Hastens Race to the Bottom 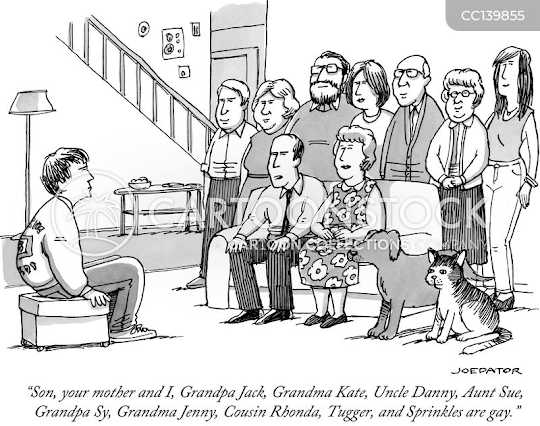 Lies alone are not enough to prove MAGA credentials these days as feats of absolute hypocrisy have become the latest measure of being a Trump supporter.

Thus far the leading Republican hypocrite in the news is Rep. Glenn Thompson from Pennsylvania.

A mere three days after voting against federal protections for same-sex marriage Thompson attended his gay son's wedding. A press secretary for Thompson confirmed to NBC News that he was there and thrilled to celebrate his son's "new chapter in his life."

Yes, it's blatant and Thompson doesn't give a damn. He was part of a group of 157 House Republicans that didn't want to codify marriage rights because it wasn't the Way of MAGA Morons

I'm going to go out on a limb here and suggest those 157 naysayers have an LGBTQ+ person in their family, or in their circle of friends. My question is how do they reconcile their obvious hypocrisy?

With the marriage protection bill headed to the Senate the American people will see which of the 50 Republican senators are against it and can judge them accordingly at the ballot box during the midterms.

In Trump world lately there's been a frantic race to the bottom of the barrel where truth goes to die, and everyone promotes the Big Lie. 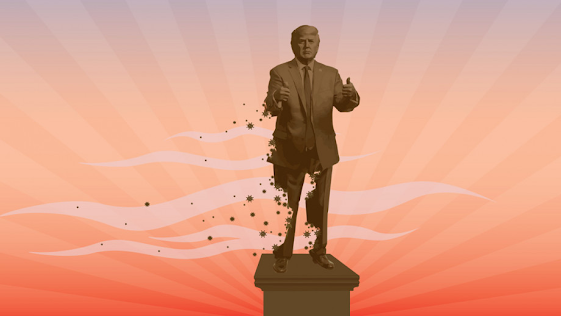 Some people really think Trump is going to get re-elected in 2024. They're going to be disappointed.

Let's think about it. The majority of Americans are now aware of how hard Trump tried to overturn a fair election thanks to the Jan. 6 Select Committee's series of eight nationally televised hearings. The effects from all the negative revelations will show up at the ballot boxes this midterm election cycle.

The fact that the Jan. 6 committee plans on holding future hearings in September will refresh voters about Trump's attempt to cripple our democratic republic.

The Department of Justice may appear to be crawling along with their investigation of the coup attempt but there have been signs their homing in Trump's inner circle and on him.

Legal experts are predicting that Trump's first criminal indictment will be for election interference in Fulton County Georgia. The DA, Fani Willis, is moving swiftly with a grand jury sending out subpoenas to local GOP officials and senators like Lindsey Graham. Her case is narrow and has a smoking gun - an audio of Trump trying to get Secretary of State Brad Raffensperger to change the vote count to favor him.

Trumps dance card of court cases in New York are rapidly advancing starting with this week which is the tentative date for the (1 case) protestor trial (Trump's bodyguard beating up a protestor at his urging) where Trump is going to be the star witness. His onetime fixer turned critic Michael Cohen is the star witness against him.

August 3rd is the day for depositions to begin behind the scenes in the (2nd case) writer E. Jean Carroll's lawsuit against Trump in Manhattan. She accused Trump of raping her and saved a dress with DNA on it. Trump is going to have to give a sample of his DNA at some point.

After taking in consideration the above listed challenges facing Trump the odds are against him dodging all of the charges. That's evident. We can also take into account other reasons why Trump won't be running for re-election in November.

For instance, who's to say his health will hold up to be able to physically run for office?

Chances are he'll be charged for more crimes in the future as both state and federal investigations progress.

Rupert Murdoch has thrown Trump under the bus! Fox News is no longer singing his praise. Both of Murdoch's newspapers - The New York Post and the Wall Street Journal ran editorials attacking him and saying he's unfit to ever hold office again. Trump's going to feel the pain without Murdoch's help.

Related: Trump Turns on His Besties Over at "Fox & Friends

I'm going to stop here. I could go on, but I don't think it's necessary. It's plain to see Trump will never regain the presidency. 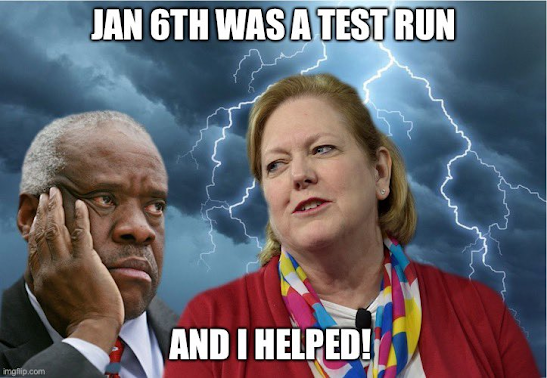 I don't think women villains get enough credit for how powerful they are in fiction and reality. Here's some reminders.

Women Villains in the Movies

Today's Pick for Villainess in the Movies
Today's Pick for Villainess in Politics
Of the 10 listed candidates, Ginni Thomas towers above the rest based upon the damage she has done to our democracy and will continue too unless held accountable.
What makes her really scary is everyone is afraid of her because her husband Clarence is a Supreme Court justice who likely will never be held accountable for defiling the court with right-wing extremist views.
As bad ass as Maleficent is, she doesn't hold a candle to the traitorous Ginni Thomas.
at July 25, 2022 No comments: 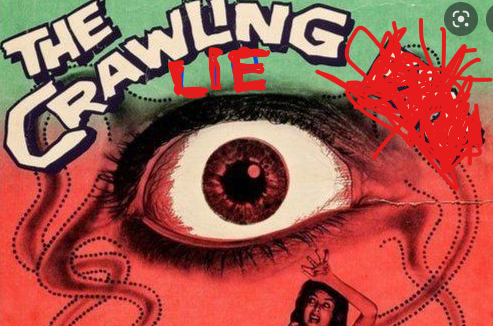 We're living an American horror story that eclipses the 1958 science fiction drama The Crawling Eye (also released as the Trollenberg Terror) that left audiences screeching in fear.
There's the United States of America, and there's a MAGA "Merika."

One built upon verifiable history and facts, the other on lies perpetrated by a horrific megalomaniac who can't admit he lost the 2020 election.

What is the world to think about the Crawling Lie/ aka The Big Lie that millions of Americans believe in?

It's got to be a shock to see and hear how many crazy people have infiltered our federal government and state governments.

Truth is a casualty in America. It's a concept so foreign to Trump minions that they scream in its mere presence.

Blood has been shed in the name of Trump. His enablers tried to help him overthrow the election with a coup attempt that left people dead and wounded.

Trump's attempts failed... the first time. The fear of a second time terrifies people as the Crawling Lie continues to poison weak minds.