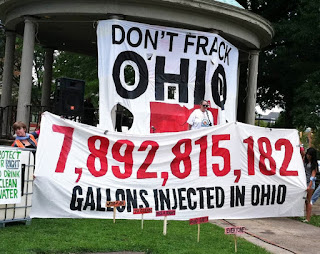 The people in Ohio are sick and tired of dealing with the negative effects of fracking but are powerless to stop it.

It appears they're fighting a losing battle and democracy has been subverted by state politicians with Big Oil connections again.

Citizens gathered the required number of signatures for ballot measures against fracking in September, but were blindsided by greedy politicians on boards of elections backed by the Secretary of State applying even more stringent pre-election requirements.

They threw out the ballots and people never got a chance to vote on them.

Jon Husted, Secretary of State, managed to get ballot measures against fracking dropped last year too. He's claimed "Unfettered authority" to determine the legality of local initiatives before they go to vote.

And the courts are backing him up.

Never mind that the people who met the legal requirements for ballots are being stiffed again. It's obvious that the people's will in Ohio has been crushed by Big Oil interests and corrupt politicians.

The industry - wary of a domino effect - does not want the thought that oil and gas extraction can be governed by citizen-crafted law to spread, for fear that if it does, it will do so rapidly.

For one thing, local measures are one of the few dwindling democratic outlets still available, but more strategically, even if the laws were struck down, they would make political waves. They would force a confrontation between democracy and the legal structures that privilege industry.
To avoid the indignation that comes when an industry and state government override democratic votes, and the snowballing of civic-lawmaking, pre-election lawsuits and administrative wrangling to pre-empt voting altogether are becoming the norm." (From Democracy Deferred)
The bottom line...Ohio is allowing Big Oil to take away citizens rights. That's a rigged system!
Time for me to walk on down the road...
at October 22, 2016 No comments:

When Are Ruptures Considered Leaks? When Big Oil Says So 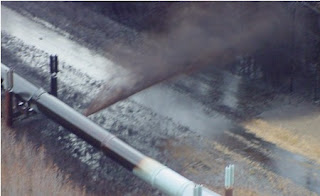 I've been watching the protest against a proposed oil pipeline at Standing Rock, North Dakota, for months.

Native Americans are taking a stand against Big Oil and are up against big odds. They know there will be ruptures in that proposed pipeline, and their water and soil will be contaiminated.

You know why they're so sure about that? Evidence and facts.

There are approximately 185,000 oil spills and pipeline ruptures every single day in America.

So why don't we hear about it in the mainstream news? It's because these disasters are deliberately censored. Proof of that is the federal government's lack of enforcement on safety regulations as these eroding pipes rupture regularly.

That's bad enough, but to pour some salt on the wound, you and I get to pay the price with gas hikes. Big Oil is making us pay for creating toxic messes and eroding pipes.

If you aren't pissed yet, get this; the oil pipeline industry gets billions of your tax dollars in subsidies!

Meanwhile the mainstream media, or as some refer to it as the corporate media, reports these blow-outs as "leaks." If you're like me when you hear the word leak, you think of a small drip.

These disasters are not small drips. They're ruptures that send thousands of gallons of crude oil into our environment every day creating toxic messes.

The mainstream media has a code for when these disasters occure. They warn us gas prices are going up. They don't say why, or anything about the environmental harm that accompanies these so-called leaks.

Knowing all of this, native Americans at Standing Rock are taking a stand against Big Oil. All Americans should be supporting their efforts to protect our environment.

2 Reasons Why I Love Tasmanian Devils: First One, They're Going To Help Save Millions Of Lives! 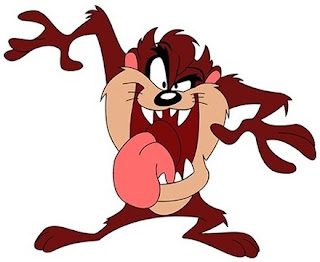 When it comes to Looney Tunes cartoon characters Taz ranks in my top three with Leghorn Longhorn, and Daffy Duck.

I know that real Tasmanian devils aren't as cute as the cartoon character (I realize it depends on what you call cute). To some, they look like a rat on steroids with their sharp teeth and coarse black, or brown fur.

They may not be very big, but don't be fooled by that.

When the devil feels threatened, it goes into a rage in which it growls, lunges and bares its teeth (Sort of like Trump supporters right now).

It also makes otherwordly screams that can seem very devil-like (Trump on the stump)!

Seeing the cartoon Taz spinning around may seem cute, but to it's enemies it means it's time to run. So basically, devils aren't very sociable. Kinda like me.

That's why I find it interesting that scientists are saying these solitary creatures may help mankind fight "superbugs."


Those mercurial marsupial's milk may be the global answer to combating the increasingly deadly superbugs which resist antibiotics.

Now, I have another reason to love Tasmanian Devils.

Presidential Debate III Tonight: On Watching a Slap Down 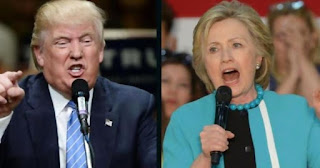 I don't know what's the matter with me lately.

I've been getting impulsive...rude...and reality seems further away everytime the subject of our presidential election comes up.

Why am I planning to watch the third presidential debate tonight when I know it's going to be another trainwreck, and truth will be one of the many casualties?

But it may be something else. Something more sinister. Am I being brainwashed? The deluge of lies in the mainstream media and social media soaks my consciousness daily.

I feel like an MMA fighter ready to tap out...just end this farce of an election! No matter which candidate wins, I'm going to feel like I lost something very basic; my belief in America and what it stands for.

That's because I don't know what will stop the hating in our society. Or, the corruption. The aftermath of this political bloodbath may be increased violence.

In an already gun happy country, this prospect seems all too real.

Tonight is the last time the two candidates will face off in a debate. I know what's going to happen. So do you.

But we're going to watch it anyway, even though we'll feel like taking a shower afterward! 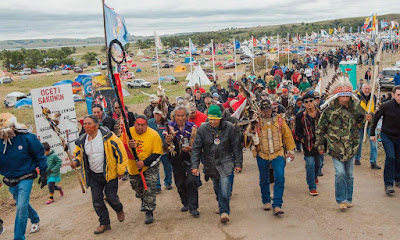 The answer, it seems, is when Ladd Erickson, a prosecutor for Morton County, North Dakota, says a person is not a journalist...in his opinion.

When asked to explain the grounds for arresting a working journalist (Amy Goodman), Erickson told the Grand Forks Herald that HE DID NOT, in fact, consider Goodman a journalist!

It’s worth pausing here for a moment to contemplate the full and chilling absurdity of this statement:

"According to Erickson, a woman who appeared at a protest carrying a microphone emblazoned with the name Democracy Now! and trailing a video crew; who can be heard in the resulting video report identifying herself to a security guard as a reporter; and who then broadcast the video on the daily news program she has hosted for 20 years is not actually a journalist.

She is not a journalist, because she harbors a strong perspective, and that perspective clashes with his own. By the same distorted logic, every muckraking news gatherer from Ida Tarbell and Upton Sinclair on through I.F. Stone, and, yes, today’s Matt Taibbi (whose work Erickson apparently admires) was not a journalist but an activist flirting with arrest."

Before Goodman came to the main protest site, the Sacred Stone Spirit Camp, no one else covered the story.

Not a single one of the major American broadcast networks had sent a reporter to cover the protest. It wasn't even mentioned on the air.

Goodman walked into the Morton-Mandan Combined Law and Corrections Center and turned herself in to the local authorities yesterday.

The charge: Riot, a misdemeanor punishable by jail time and a fine.

So, to be clear; Goodman came to an active protest, and with her film crew, she covered it and is now being blamed for the protest.

Something stinks in North Dakota when authorities try to suppress journalists from doing their job based upon one man's opinion of who is a journalist...and who is not a journalist.

Of course there's more than just one man trying to break up the protests - there's a giant energy corporation (Energy Transfer Partners)  bankrolled by 37 banks behind these actions.

This is just another example of a big corporation raping resources to make a profit. Here's what you need to know about what's happening in Standing Rock. 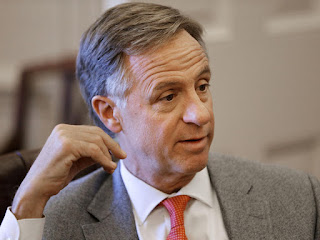 I've got an interesting story for you today.

Q - Did you know that Tennessee Governor Republican Bill Haslam (photo), with a net worth of $2 billion, is America's richest elected politician?

Q - So what do you suppose a billionaire would do while in public office? (With Donald Trump running for public office this is a timely question.)

A - Haslam was sneaking around with his business cronies to privatize all Tennessee property, but Campus Workers exposed his scheme.

You might think Haslam is going to vote for fellow billionaire Trump, but you'd be wrong. There is no brotherhood among greedy men.

Don't think Haslam has given up on his plans to privitize Tennessee. Now that his plan is out in the open he's trying to sell it to fellow Republicans who, thus far, have resisted his efforts.

Billionaires are rarer...thus far. Looking at Haslam's attempt to cash in using his office is a precursor to what we can expect from him...and Trump (if elected).

My final thought: Bored billionaires seeking power is something we will all have to be on guard about in the future.

Unless that billionaire has a flawless history of fairness and high morals (and a record of service and sacrifice to the country) they shouldn't be trusted. 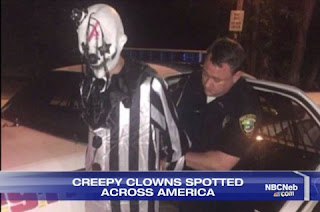 "Don't you love farce?
My fault, I fear.
I thought that you'd want what I want...
Sorry, my dear!
And where are the clowns
Send in the clowns
Don't bother, they're here."
- Send In The Clowns

It's not a real good idea to bring on the clowns this year.

With Halloween looming around the corner there's creepy clowns in the news for stalking people from coast-to-coast.

There's even a Definitive Map of America's Creepy Clown Epidemic.

The new menace is called clowning.

Clowning has put real, make-em-laugh clowns and their defenders in a very bad place.

Here's some examples of clowns recently arrested or accused of having made threats:


You know what else is weird about this menacing clown phenomenon? It's even going on in the UK. Check this out.

The creepy clown movement didn't just spring up overnight however. According to a Rasmussen poll in 2014, 43 percent of American's "don't like" clowns.

More recently, the annual Chapman University Survey of American Fears found that clowns were a cause of significant anxiety for 6.8 percent of Americans in 2015.

My advise to parents is simple, don't dress your kid up as a clown. To teenagers and older Halloween revelers, I especially want to warn you not to go anywhere as a clown this year.

It's not even safe for Ronald McDonald right now!

You could get arrested, or even worse...someone might think you're Donald Trump!