They still burn witches you know… 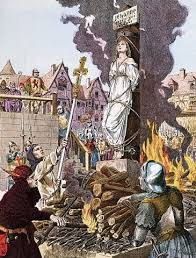 In a glimpse of superstitious hysteria we don't usually see outside of a middle-school reading of "The Crucible," a Nepalese woman was horrifically burned alive after being accused of using evil magical powers.

According to CNN, the mother of two was set on fire by family members after one of her shaman condemners claimed that she had cast a spell on a relative.

Posted by ImBlogCrazy at 5:32 PM