No,This is Not a Fake News Headline: President Tries Blackmail, Then Tweets Trash About TV Host 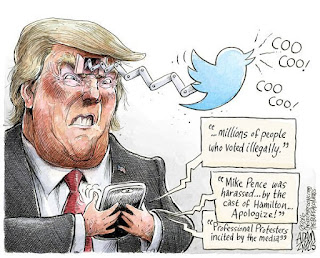 Liar-In-Chief, Trump, is back to his old blackmailing tricks.

Throughout his career Trump has used the media, and an army of lawyers, to intimidate people he doesn't like. His connections to the National Enquirer is the latest example.

"Morning Joe" TV host Joe Scarborough asserted Friday that three top White House staffers had told him that President Trump could arrange to "spike" a negative story about him in the National Enquirer if Scarborough would call the president and apologize for his negative coverage of Trump.

This is essentially blackmail.

Trump has often spoken of his long-standing personal relationship with David Pecker, the owner of the National Enquirer.

During the 2016 campaign, Trump several times referred to negative stories in the tabloid aimed at his rivals, such as Ben Carson and Ted Cruz.

Lawmakers denounced the tweet. House Speaker Paul Ryan told reporters, "Obviously I don't see that as an appropriate comment... What we're trying to do around here is improve the tone, the civility of the debate. And this obviously doesn't help do that."

Trump continues to use his bullying tactics whenever he feels slighted by someone. The irony of his wife, Melania, dedicating herself to stopping cyber-bullying is thick as a brick.

It hasn't taken Trump long to drag the office of the presidency into his personal swamp. No wonder the world is laughing at our man-baby's nasty twitter habit. 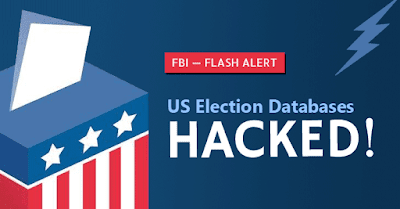 Lawmakers need to make a quick, but thorough, change in the nation's electoral process before 2018.

That mean's taking some immediate action. While Trump and cronies drag their feet in making improvements to safeguard our system, Putin's pals are working on improving their successful cyber attacks in 2016 for the next round in 2018.

Meanwhile, Trump has appointed some sketchy minions to a so-called Presidential Commission on Election Integrity. This is the only thing he's done to address the threat to our voting system.

How credible do you think this commission is going to be?

It's vice-chair, Kris Kobach, was sanctioned by a federal judge last week for his “deceptive conduct and lack of candor” in a voting rights case brought against him.

Don't expect this commission to even mention Russia.

Rest assured, it will have no credible facts to back up it's claims.

The safest, and best way to protect our nation's voting process is to go with a paper trail system. It's time to go old school.

There's 29 states that use a paper ballot election system according to BallotPedia.

In some cases states have a paper ballot combined with voting machines.

That means just 21 more states have to convert to paper before the next elections. Not an impossible task.

But, Congress needs to act swiftly, in a bi-partisan fashion to assist the states that need a voting system involving paper.

Experts all agree paper is a lot safer than letting some 400-pound hacker in a Russian basement screw with our computerized voting system.

The solution is simple. I'm waiting....

Mr. President: 'Take Down That Magazine...' 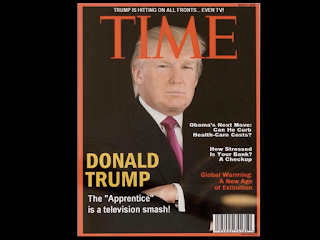 Most people would be embarrassed if they were caught photo-shopping their image on a national magazine cover to look important.

Our president (it really hurts to say that) could care less and is currently displaying a fake (fake news?!) Time Magazine cover with his smiling mug on it, looking smug with arms crossed, in the lobbies of five of his golf course lobbies.

Apparently Time Magazine didn't appreciate the gag (if that was what it was) and asked the Trump Organization to take down the phony magazine covers featuring a pre-presidential Trump.

The newsweekly made the request after The Washington Post reported Tuesday that at least five Trump properties had hanging a Time Magazine cover showing Trump.

But the magazine covers, dated March 1, 2009, were fake. The magazine did not publish on that date; its March 2, 2009 issue featured actress Kate Winslet.

Either Time Magazine has no sense of humor, or a desire to repent for the actual issues they did run featuring The Donald. In any event, the request was considered newsworthy by a lot of publications.

The whole affair is sad.

That America has a full-blown narcissist and serial liar for a leader is the stuff of a Greek tragedy where the crazy king attacks his allies, and mistreats his people and the environment, in the name of money.

President Ronald Reagan was famous for telling the Russian leader, Gorbachev, to take down the Berlin wall dividing the East and West of Germany.

In a humorous, and nearly parallel way, Time Magazine has made history with their call to a sitting president to take down those fake covers with his bloated mug on it.

Memo To Democrats: Until You Get A Charismatic Leader Expect To Keep Losing 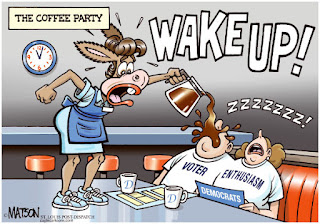 No amount of money will win elections for the Democrats until they shake up the party with some new blood.

The special election in Georgia was one example why the Democrats are losing ground. A record $26 million was raised to support the Democratic nominee Jon Ossoff ...and he still lost.

The specter of Trump's unpopularity loomed over that election, but did not derail the Republican candidate Karen Handel.

Love him, or hate him, Trump is charismatic when it comes to gaining followers. They love him so much that they show up at his rallies (he had another one in Iowa recently) days and hours before "showtime."

His hold on his fans borders on a cult following. He simply can do no wrong in their eyes. It's this kind of devotion that has kept Trump in office thus far.

The Republican party is afraid of Trump because of his core followers in key states.

There's no one even close in the Democratic party with a big following. Democrats are disorganized and demoralized. Instead of doing something about it, they continue to support the failed leadership of Nancy Pelosi and her cronies.

The excuse for staying with a sinking ship? Pelosi can raise a lot of money. Talk about a weak excuse. A charismatic leader with a central message could also bring in a lot of money and voters.

Democrats desperately need an anti-Trump. A charismatic leader who emerges with a powerful message to unite the fractured party.

Pelosi is poison, as is Hilllary Clinton. It's time for the old guard to step down and to get fresh new faces and ideas on how to further a progressive agenda that will entice the majority of Americans to follow.

A leader and a universal message. Sounds simple. But old politicians do not go quietly into the night. They need encouragement...

Trump Appointee Guilty of 'Deceptive Conduct and Lack of Candor' 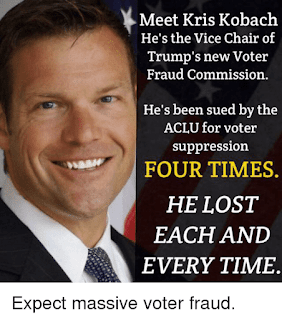 It's just another day in TrumpLand.

Meet Kris Kobach. Trumpie of the Month for June:

The last we heard from Kris he was busy working as the vice chair for the dubious voter fraud commission Trump created, without proof, claiming that millions of people voted illegally in the 2016 election.

Kobach has also announced he's going to run for governor of Kansas.

But let's hold on for a moment. Here's what's currently happening with Kobach...

The Republican state official tapped by President Trump to lead his sketchy voter fraud commission was sanctioned by a federal judge Friday for his “deceptive conduct and lack of candor” in a voting rights case brought against him.

Voting rights advocates are concerned that the so-called "Presidential Commission on Election Integrity (oxymoron alert!)" will be used as a cover to push restrictive voter laws like the one Kobach is currently battling in court to defend.

Putting a wolf in the hen house never ends well for the chickens. Trump found his "wolf" in Kobach who is willing to cull the voter population to favor Republicans.

We haven't seen the last of him despite this set-back. It certainly isn't going to bother Trump - or cause him to replace Kobach.

Expect to see him as the Trumpie of the Month again in the near future. 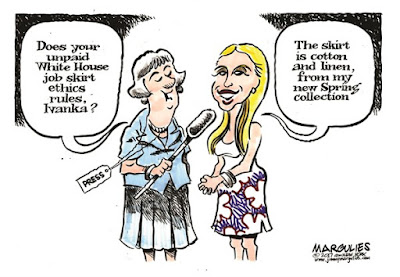 To refresh your memory,
Episode One, of my "All In The Family" reality show described how Eric Trump funneled funds into daddy Trump's foundation.

Ivanka Trump continues to follow in daddy's corrupt foot steps. This heart-warming episode describes how Ivanka has been accused of ripping off another companies shoe design.

The apple doesn't fall from the tree as Ivanka described herself as the "Assistant to the President of the United States" and noted that she had an office in the White House.

It was her hope that she would be immune from anything because her daddy needed her help, and she should be free from any lawsuits because of her position in the White House.

Ivanka has really been busy these days, making deals with the Chinese to produce her shoes - and other assorted items - with sweat shop labor.

People investigating how badly the workers were treated ended up in a Chinese prison, likely to never be heard from again.

As in all the accusations, she simply lies about what's really happening with her fashion line, defying governments and courts that try to stop her.

Stay Tuned for Episode Three: Things Start To Get Real Ugly in the Trump Clan 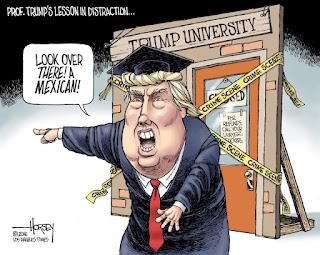 The ghost of Trump University has recently been sighted.

Thought to have been put to rest with a $25 million settlement, The Trump U scandal has re-emerged after a new suit was filed Friday.

More than 6,000 people were listed in the suits, claiming they were lured into paying up to $35,000 to learn the secrets of Trump’s business success.

Now, one member of the class action lawsuits, Sherri Simpson, has filed an appeal against the settlement, claiming she was not allowed to exercise her right to “opt out” of the multi-million-dollar deal.
The ninth circuit court has agreed to expedite Simpson's appeal, with a verdict expected in late summer or early fall.
If the court rules that Simpson should not have been included in the settlement, she will be free to pursue her own lawsuit against Trump.
Here's the good part; she said she will not settle out of court.
That means Simpson will be able to sue Trump independently for fraud, which she hopes could see Trump having to testify before a jury.
As the ninth district court ponders Trump's fate I see some irony unfolding.
In May 2016 a Ninth District Hispanic judge, Gonzalo Curiel, made public more than 400 “playbooks”, which showed how the Trump University staff were instructed to get people to accrue credit card debt to pay for tuition fees, and ordered to target financial weaknesses in a bid to sell further courses.
Trump, who launched his campaign by accusing Mexico of sending “rapists” to the US, attacked Curiel over the release.
That didn't get him anywhere. As a matter of fact it was the Ninth District court that has repeatedly stopped Trump's travel ban against Muslims.
It seems to me the Ninth District Circuit court knows Trump all too well. Just guessing, but I think Simpson's chance for getting Trump into a court trial look pretty good.
One reminder; Trump U was before Trump was president, and as such, he can be tried as a civilian.
Time for me to walk on down the court...
at June 25, 2017 No comments: