Hold on! At first blush this may sound like a boring subject, but stick with me here.

* Did you know that North Carolina produces more sweet potatoes than any other state?

* Did you know that hardened sweet potatoes makes a material as strong as concrete?

Okay. I bet you didn’t know that sweet potatoes can burn for weeks on end like coal.

Who knows what possibilities lie there? Just one problem; putting out the smoldering sweet potatoes is not an exact science.

You know, how I know that?

A silo full of dehydrated sweet potatoes has been smoldering in a town an hour east of Raleigh since Thanksgiving. True story.

Firefighters and other town personnel have been at the scene around the clock since a suspected spark started the blaze. At least 25 million gallons of water has been sprayed, but it's not clear when it might be extinguished.

No one is sure when the sweet potatoes will stop burning. Kinda reminds me of Chernobyl, but not as toxic.

Can You Guess Who I am? 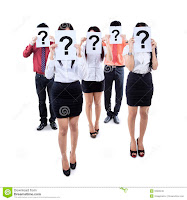 Guess who I am.

Like the Joker from the Dark Knight, I just want to see the world burn.

I am white, and really, really angry.

I am also afraid.

I believe the only religion in the USA that can be trusted is Christianity.

I agree that ALL Muslims should be banned from entering our country.

I think the idea of a massive wall separating Mexico and the US is doable and will solve most of our illegal immigration problems.

I believe thousands of Muslims in New jersey celebrated on 9/11.

I believe we once banned Islam in this country in 1952.

I still believe President Obama is a Muslim and was born in Kenya.

I believe in smaller government and that people should be able to carry assault weapons anywhere they want.

I believe that President Obama is trying to take our guns away.

I believe that anyone who disagrees with me is unpatriotic and doesn't want to see America become great again.

I believe that we shouldn't tax corporations because it's not necessary as the trickle-down-effect benefits the middle class and poor.

I believe that Donald Trump would make a great president because he is point on.

What was the scariest moment of your life?

With fear floating around this country like a dark cloud, I thought it might be interesting to explore the scariest moment of my life!

We all have different fears, although some are more universal than others. Sharks, maniacs, natural disasters, the Boogey Man, fire, and terrorists come to mind.

Before I share my moment of terror, I would like to add that it doesn’t matter what your age was – if something scared the Shinola off your shoes then it qualifies.

In the turbulent decades of my life I’ve experienced war in Vietnam and Cambodia, had numerous ear surgeries, back surgery, was diagnosed with PTSD, was beat up by hired VA cops while in a PTSD program, and grew up fighting in the barrios of La Puente and El Monte.

The scariest moment of my life was…

When I was five-years old we had a big red tabby called Tiger. Tiger thought it was his duty to fight any other animal he encountered. He roamed the neighborhood terrorizing other cats and small dogs. (Chickens once too, but that’s another story)

One day Tiger got into a knockdown all-out brawl with another cat under our house.

Pause here; my mother loved Tiger and nothing was too good for him.

On the day Tiger decided to fight another cat under our house, my mother ran outside in response to the ear-shattering squalls. Quickly deducing the situation, she ordered me to go through the crawl hole and to “get poor Tiger out!”

Have you ever heard two cats screaming at each other in unholy anger?

As I crawled around blindly (with no flashlight) there was an eerie pause…silence. For a brief moment I thought God heard my prayers and Tiger left on his own – but then their shrieks suddenly started up next to me and I saw two sets of blazing cat eyes glaring at me!

That’s all it took. I peed my pants and screamed! Seemed like for minutes, but was probably only a few seconds. In that time the cats broke off the battle and both streaked out the crawl space and into the sunlight.

So, what was your moment of terror? What still get’s your adrenaline going when you think about it? 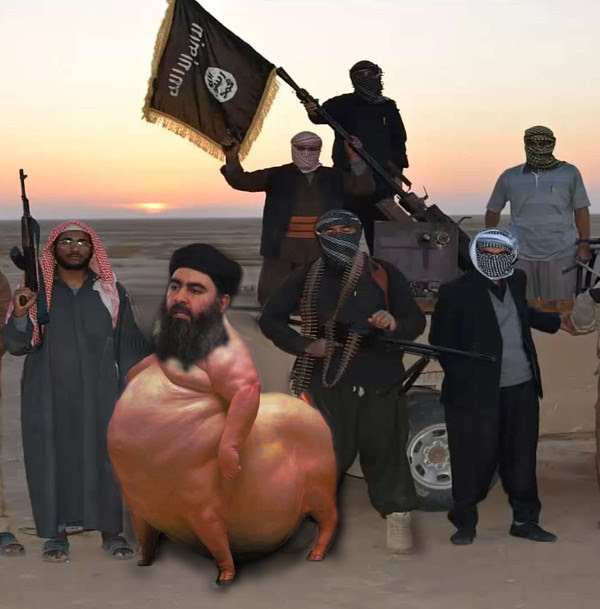 Just wanted to share a heart-warming letter from the leader of Daesh (ISIS hates this name) to Donald Trump:

Your incendiary anti-Muslim comments come like a blessing from Allah.

We’ve been telling Muslims worldwide that the United States hates Muslims and now you proved it by suggesting we all be banned from your shores!

Allah is great! Banning Muslims really stirred up my loyal followers worldwide. They see the Great Satan for what it is!

You are furthering our aims beyond our wildest expectations!

Love the idea of banning the internet! The amount of hatred you’re creating between Muslims and Americans is helping us achieve our jihad…Allah is Great for delivering you unto us!

As I write this, our media connections are busy making posters and videos of your presidential campaign to share with our brothers, so that they may see how much America hates them.

If you need any help vilifying all the Muslims in the world just let me know. My advisors would be pleased to work with your staff.

Good luck, and keep up the good work!”

Serenity and Painting With Oils 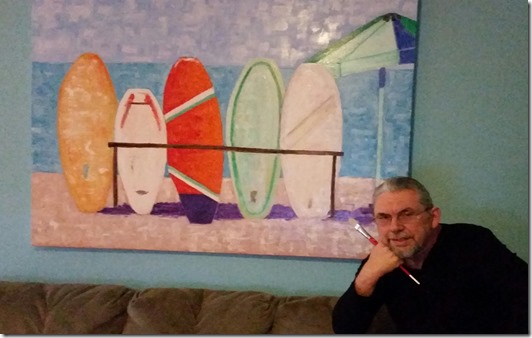 (Just finished this piece for our living-room)

One of my favorite hobbies is oil painting. I’ve been a student of the medium since 1966 (my sophomore year in high school).

There is no one correct way of painting. Artists train themselves in a wide variety of approaches, which they continually practice and extend as they find occasion and need for.

Contrary to what some people think oil painting is straightforward. It’s far simpler than etching or even watercolor painting. If you can see something, you can paint it in oils. Oil painting is the process of painting with pigments bound in oil. 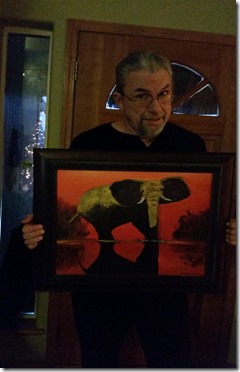 The common oils used in oil paints are linseed oil, poppyseed oil, walnut oil, and safflower oil. However, I have used vegetable oil in a pinch and was surprised at the satisfying results.

If you’d like to know more about painting with oils, here’s a great link:

25 Oil Painting Techniques You Should to Learn

I paint because it satisfies something in my soul.

As a Vietnam veteran with PTSD, I’m always seeking serenity. Painting offers an escape from the real world.

Unicorn Believer and Crazed Sidekick Get Their Day in Court

Sometimes I have to shake my head in awe and wonder at some of the cases tried in our Supreme Court.

On Tuesday, the Supreme Court will examine the bedrock principle of "one person, one vote" in a major case that could yield the Republican Party a critical advantage in future elections.

In Evenwel v. Abbott, the court is being asked to change how states draw legislative districts in a way that would boost the electoral power of white, rural voters, who lean Republican, at the expense of Latinos and African Americans, who tend to vote Democratic.

The plaintiffs are two wackos. Sorry for the slang, but when you read their background here you’ll have to agree. Sue Evenwel and Ed Pfenninger are a couple of bigoted people.

Ed believes in unicorns. They appear repeatedly in Pfenninger's online posts. Arguing with a commenter to one of his YouTube videos, he wrote in 2013 that the "unicorn was a real creature known for it's [sic] great strength, and is also referred to in ancient literature.”

I rest my case.

I hope the “Supremes” do the same thing by laughing at these two idiots while giving them a thumbs down.

The New York Daily News came out with a controversial cover on Friday that is still resonating with many. The cover portrayed National Rifle Association chief Wayne LaPierre as a "terrorist.”

With LaPierre's NRA and its congressional allies stymying even modest gun safety measures — including, on Thursday, efforts to expand background checks and prevent people on the terror watch list from purchasing guns — it's easy to forget that the NRA's hardline opposition to reform isn't only out of step with the views of most Americans.

It's also out of step with the vast majority of NRA members.

According to a 2013 study featured in the New England Journal of Medicine, 74% of NRA members favor a universal background check regime for gun purchases, while a 2012 poll found that 71% backed banning gun purchases by individuals on the terror watch list.

I was impressed when John Oceguera, former speaker of the Nevada state assembly and currently a Democratic candidate for Congress from the state's 4th District, resigned his NRA lifetime membership in a letter to LaPierre, which he posted on his campaign website.

"Our country is facing a tragic gun violence epidemic, and we cannot ignore it. Still, the NRA opposes any legislation that would help keep guns out of the hands of terrorists, criminals and the mentally ill, and spends millions to stop any action in Congress that could help prevent further violence," he wrote. "I cannot continue to be a member while the NRA refuses to back closing these loopholes."

Perhaps if more NRA members followed Oceguera’s lead the NRA would be forced to acknowledge reality – and common sense – when it comes to gun safety laws. So far, those NRA members who favor universal background checks have been a silent majority.

The need for them to speak up has never been greater. Something has to break the deadly cycle of resistance perpetrated by the NRA’s corrupt leadership. We need to stop the hold that the gun and ammo industries have on us, and from destroying our country for the sake of profit.

U.S. taxpayers subsidize the salaries of the NRA leadership. That’s because the NRA, as a tax-exempt organization, pays no federal taxes. LaPierre pulls down a cool million a year for inciting fear.

Other top 2010 salaries at the NRA. Your tax dollars at work.

The NRA’s profit soars as deaths from gun massacres mount