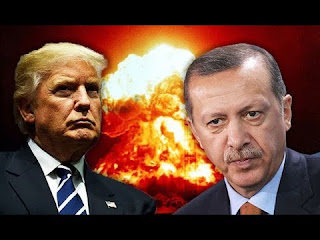 With the exception of Trump's hardcore base (the QAnon crowd), no one in the world believes a word Trump says.

Not even the Republicans aka Trumplicans.

The Democrats already knew he was a serial liar. World leaders who have met Trump - or just know of his reputation for seeking flattery - have found him to be as malleable as clay.

When Trump opened the door for Turkey to invade Syria and attack our ally the Kurds, the entire balance of the Middle East was destroyed.

When Pence and Pompeo met with Turkey's strongman all they could come away with was a 5-day cease fire (or as Turkey put it - a "pause").

It took less than 24 hours for that "pause" to be violated. The Turks used chemical weapons against Kurdish civilians yesterday.

The so-called cease fire was a humiliating defeat for America. Our troops in the region are demoralized because of Trump's betrayal of their comrade-in-arms against ISIS.

When I found out that the U.S. has fifty nuclear weapons in Turkey, a sick feeling hit me. The nukes are on (or near) the American air base in Turkey.

It didn't help matters that Trump insulted Turkey's strongman with the stupidest diplomatic letter ever sent by an American president (or diplomat) to another country.

Erdogan responded with a gas attack and a promise of "more to come" in response to the "devil letter" Trump sent.

It appears Trump's actions have hit a critical mass in the Middle East. Russia, Syria, and the Turks (along with their extremist militias) quickly seized the vacuum our retreating troops left.

In their wake is a growing humanitarian crisis, a resurgence of ISIS, and a strategic victory for Russia and Iran. It was a shameful exit, as our troops were forced to blow up their hastily abandoned bases.

It's a sad reflection of America's waning power overseas, thanks to Trump's alienation of nearly every democratic nation (our allies) on the planet. Selling out the Kurds only proved that. 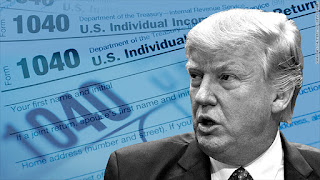 Trump has steadfastly blocked all attempts to reveal his taxes for nearly three years, but that's changing.

It's been an ugly battle between Congress seeking transparency, and Trump stonewalling all efforts to share his taxes, like the presidents before him have done for almost 50 years.

The orange ape's real estate business reported different financial figures for two of his Manhattan properties to lenders rather than to New York tax authorities, according to documents obtained by ProPublica.

The scam was simple

As damning as this report is, it's only the tip of the iceberg.

Related: Trump Loses Big and is Ordered to Turn Over 8 Years of Tax returns

A gathering consensus among the pols is that Trump's taxes will end up in Congresses hands before next year. Possibly before Christmas.

The Senate will probably be in the midst of the impeachment trial when Trump's taxes are released as evidence of tax fraud and corruption.

Those long-held taxes will just be one of many articles of impeachment that will bring Trump - and his corrupt cronies in government - down.

Trump's biggest nightmare is happening - the taxman is coming for him.

The Snake in the Grass: Mulvaney's Vital Part in Ukraine Scandal Revealed 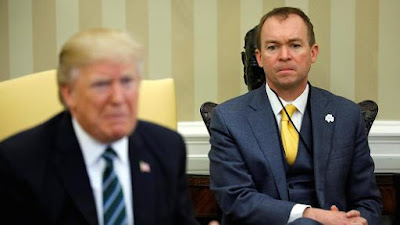 In a Washington Post report yesterday, Mulvaney was said to have played a critical role in the unfolding crisis.

He often met with Sondland and the details of their conversations were kept from then-National Security Adviser John Bolton, and others who had expressed concerns about the White House's efforts to extort the new Ukraine government.

If you wondered who was behind cutting the funds off that Congress had approved for military aid to the Ukraine, look no further than Trump and Mulvaney.

Mulvaney put the hold on nearly $400 million weeks before Trump's now-infamous July 25th phone call to the Ukrainian President Volodymyr Zelensky, according to The Post.

The article stated Mulvaney told staff that the money to Kiev could be turned on and off without legal repercussions, though some questioned the legality of putting the aid on hold.

Without snake-in-the-grass Mulvaney's help the shadow campaign could not have been conducted. He played Don the Cons enforcer in the shakedown of Zelensky.

I suspect Mulvaney, and other high-ranking Trump minions involved in this scandal are going to pay a price for their treason.

If they don't... our democracy is officially overturned.

Revenge of the Chicken Hawk: Bolton's Back... and Ready To Sing 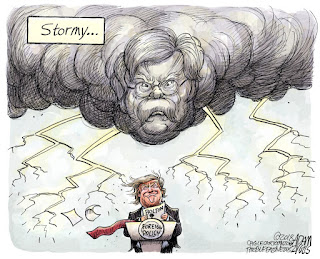 When John Bolton, the former national security adviser, departed the administration he left under mutually bitter terms with Trump.

After Bolton left, I knew the idea of a lifetime war-monger going quietly in the night was as likely to happen as a lamb standing next to a hungry lion and not becoming it's meal.

There would be revenge. I predicted as much in this former post where I posited Bolton might be the whistleblower.

Bolton's back in the public eye again, and he's got a lot to talk about. He's currently working on a new book about his time serving Trump and has a 'lot to dish," according to one knowledgeable source in a Washington Post article.

Apparently, Trump has raised suspicions among his cronies that a spiteful John Bolton is one of the sources behind the flood of leaks against him on the Ukraine scandal.

According to a New York Times article, Bolton said, "I am not part of whatever drug deal Rudy and Mulvaney are cooking up," to the White House lawyers.

From the moment Bolton became aware of the shadow operation for the Ukraine, he lashed out against it, according to Hill's testimony.

It seems that despite being a chicken hawk, Bolton had a certain line in the sand that even he wouldn't cross. "Giuliani's a hand grenade who's going to blow everybody up," Hill testified.

I think it's safe to say Congress will be wanting to talk with Bolton soon, a dangerous prospect for Trump who ousted him after disagreements over North Korea and Russian policy.

It looks like Trump has found someone more vindictive than himself, and that's saying something. I'm looking forward to Bolton's testimony.

Trump's 'Beautiful Wall' is a No Go 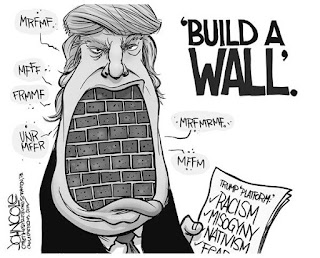 Trump has some explaining to do with his base.

His signature campaign promise in 2016 of making Mexico pay for building a wall on the southern border, has suffered it's final blow.

Not only has Mexico told Trump to look elsewhere, but the courts have all defied his corrupt attempts to take taxpayer money to get re-elected.

A Federal district court judge said Trump violated US law when he declared a national emergency over the country's southern border and funnelled taxpayer money towards his campaign promise.

The ruling clearly stating, "None of the funds made available in this or any other appropriation may be used to increase federal funding to support Mr. Trump's campaign vow."

The Supreme Court has already stayed a previous ruling that blocked federal funding towards expanding Trump's wall in Arizona and California.

The only wall Trump is going to see built is the one around him in the impeachment inquiry.

Congress is Back: Impeachment, One Day at a Time 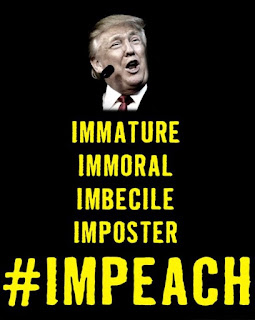 Congress is back in town.

The chances of a formal impeachment will be accelerated with numerous Congressional hearings gathering more vital evidence daily.

Today, will feature Fiona Hill, who served as Trump's top Russia adviser until she left the administration in August. She'll be testifying before three committees.

There's some question if Semyon Kislin, a business associate of Rudy Giuliani, will appear for a scheduled deposition today.

One of the most interesting interviews is set for Thursday, when Gordon Sondland, the U.S. Ambassador to the European Union, testifies in front of a joint congressional committee about his conversation with Trump.
________________________________

A slew of subpoena deadlines are up this week

* Vice President Mike Pence is looking at a subpoena deadline by Friday.

* Lev Parnas and Igor Fruman, associates of Giuliani, face a deadline for documents midweek. Both have been arrested and charged with campaign violations, money laundering, and other financial crimes last week.

As polls show continued support for impeaching Trump, the chances of formally filing for impeachment may only be weeks away, as long as the Democrats are patient... and take it day-by-day.

Next Up: President Pence? 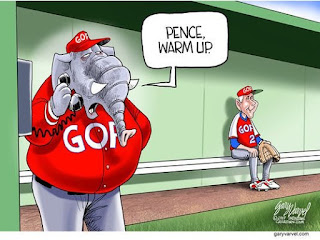 As impeachment, and the possibility of being ousted out of the White House looms for Trump, some pols are whispering about Pence being the next commander-in-chief.

With a majority of Americans for impeachment, Trump's chances of surviving and running for re-election next year are getting smaller each week.

The revelations in the Ukraine scandal has stunned the world. The United States part in international corruption has been exposed in the Ukraine, and our president was behind the whole devious shadow diplomacy.

Let's take a leap and consider Trump's abrupt removal from office has happened.

In the days that follow does Pence get sworn in as our new president? Or, is he going down with the scandal ship, a loyal Trumpie to the end?

Let's say the man who can become a shadow anywhere, is sworn in, and he doesn't go down the drain with his master. President Pence.

What could we expect to see with this change in leadership?

After the constant chaos of the Trump era, a Pence presidency could swing back to some political normalcy. We wouldn't have a foul-mouthed president who picks on people big and small on twitter.

That's not Pence's style. He likes to operate in dark shadows and not stir up any controversy. Anybody that's observed Pence's time in office knows he had no problem with enabling Trump.

While Pence will pursue many of Trump's policies in the hope he keeps part of the orange ape's base, he's going to have to be careful to avoid bullying lawmakers in the House and Senate.

Above all, Pence is a survivor with no shame. Despite the religious facade he puts up, Pence has lied numerous times for Trump. He's a political opportunist with no morals or ethics.

In short, Republican lawmakers will probably embrace him with relief.

I doubt that will be the case with the majority of Americans who are going to want to see all traces of Trump's corrupt regime erased next November.