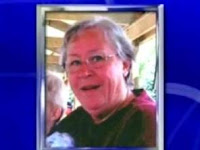 survives with only two cans of Mountain Dew and a bottle of water
IOWA CITY, Iowa - A 63-year-old woman trapped on a small raft caught in tangled river brush could hear passing cars and people talking but wasn't discovered until a fisherman on his way to his favorite hole spotted her five days later, the woman's son said Tuesday.
Jeanne Schnepp's odyssey began last week with a fishing trip on a tiny inflatable raft along the Wapsipinicon River. But when the Iowa woman found herself on raging waters that nearly flooded the banks, she partially deflated the raft and headed for the side.
Water masked the brush, which caught the raft and held it — and Schnepp — for five days before rescuers pulled her from the river Monday afternoon.
Click here to read the rest from the Associated Press
Photo via AP
at August 19, 2009 No comments: