Pandemic Diary Day 106: 'Houston...We Have a Problem and It's Not Just You, It's the Whole Country' 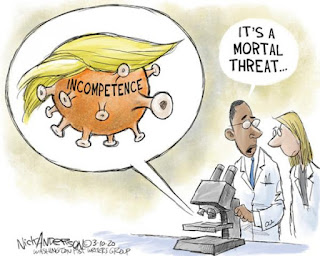 Dear Diary,
Houston, Texas, is well on it's way to being the new epicenter for the pandemic in the United States.
That message was conveyed by Republican Rep. Pete Olson. He warned the House Energy and Commerce committee that at the current trajectory in Houston the city was on pace to be one of the worst affected cities in the nation.
I remember when the pandemic was first recognized and people were panic-buying toilet paper and paper towels. In a sign of just how bad it is in Houston today; there's now a limit on how much toilet paper and paper towels can be purchased at one time.
Olson admitted, "It's damn scary."
What's also damn scary is the pandemic has ramped up - thanks to reopening too soon on Memorial Day - and 46 states are watching COVID-19 cases rise.
With no central leadership against the virus, America is losing the battle daily, with no end in sight. Trump refuses to take the pandemic seriously and goes against what his own CDC recommends. Like wearing face masks.
Republican governors that followed Trump's lead on opening practically everything, are now faced with slapping restrictions on their states and possibly closing down again. Science denier, and Trump puppet, Florida governor Ron DeSantis is having trouble concealing how badly infected the state is.
His only excuse is that young people went to bars and beaches without social distancing. What the hell did he think young people were going to do after been released from shut-down orders? The problem with the bars could have been lessened with enforcing proper safety precautions.
But no one wore masks and they crowded together like mice in cages. No state mandate added to the fuel that caused the fire that's spreading across Florida right now.
Healthcare experts know things will get worse because we're not responding correctly. Dr. Fauci made that clear yesterday during a CNN interview.
The only hope the country has is that individual governors - in particular Republicans who've been following Trump like sheep - will quit be intimated by him in favor of saving their constituents lives.
That is to say if the governors start going by science instead of rhetoric, there's still hope.
On the Homefront - Medford, Oregon 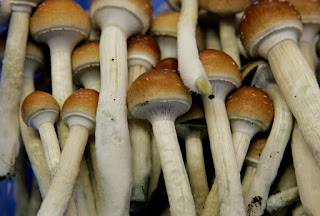 MAGIC MUSHROOMS
As an old hippie I find it amazing that the things they use to lock people up for - marijuana and now magic mushrooms, are being accepted in mainstream America.
(AP Photo by Peter Dejong)
There's an Oregon ballot measure to legalize the use of psilocybin in therapeutic settings. Organizers say they already have enough signed petitions and believe it will appear on the November ballot.
**Oregon hits 3rd consecutive day of more than 200 new coronavirus cases. The most recent health report says there's been a total of 8,423 confirmed novel coronavirus cases, and 202 deaths from the virus.
Quote for the Day; "Every solution to every problem is simple. It's the distance between the two where the mystery lies." -Derek Landy
at June 29, 2020 No comments: