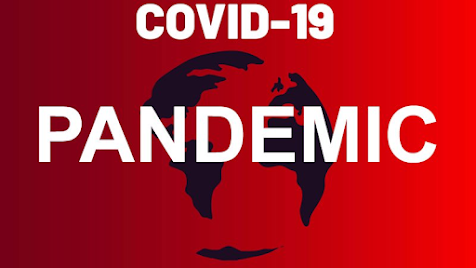 The pandemic is one good explanation for the massive anger in America today.

Right or wrong, everyone is pissed at something and looking to lay blame on others for their woes.

Sometimes however, it's hard to find a scape goat. Two popular fallbacks are blaming ideologies and the rise of full-blown tribalism.

Still, it seems the pandemic is a player in any conversation.

This article Why More Kids are Getting Eating Disorders  talks about eating disorders related to the pandemic lockdowns.

There's really no doubt the pandemic has led to prolonged stress which leads to significant psychological and social effects.

There's also no doubt our prolonged pandemic is affecting healthcare workers trying to combat it.

Business pundits are stressed out by the pandemic's toll on the economy. Supply chain problems still plague most cities.

Worse yet, the pandemic could be ongoing for years because a large population of Americans are refusing to get vaccinated. The idea of no hope in sight even discourages those with positive attitudes.

Paradoxically pandemics have cleared the way for innovation and advances in society (including medicine and public health), economy, and political systems.

It's becoming increasingly common to blame the pandemic for ANY PROBLEM we have.

In the search for normality and restoration of our society to pre-pandemic times, many disgruntled American's patience has worn thin.

These disgruntled Americans are searching for cures in all the wrong places. Experts in healthcare are reviled. Scientists haven't been this unpopular since the Catholic Church declared they were heretics in medieval times.

People often need a boogieman to blame for all their miseries. There's no better candidate today than the damn pandemic. 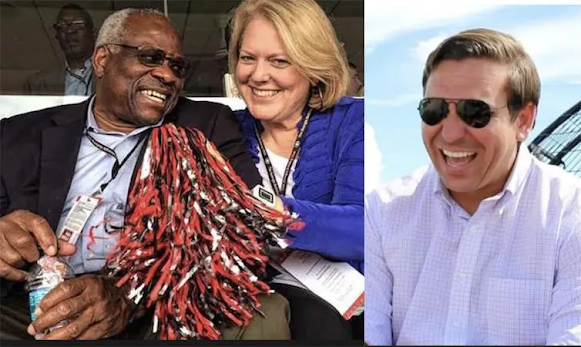 Supreme Court Clarence Thomas doesn't care about equal justice for all. He's an extremist who sides with conservative conspiracy-riddled radicals.

One of the many reasons we know this is his wife, Ginni, is a die-hard Trump fan who applauded the Jan. 6 rioters and encouraged them weeks before the insurrection attempt.

She runs her own consulting firm which has been working with Gov. DeSantis in helping him encourage groups, including Judicial Watch (an extremist group) that uses information requests and lawsuits to investigate liberal public officials.

As for Thomas, he's completely ignored the obvious conflict of interest his wife is causing, and actually encourages her right-wing activities.

How do we know that?

Because his wife admits Thomas has been in contact with DeSantis regularly. The fact that Thomas is supposed to be neutral doesn't even phase him. He made his decision a long time ago to be a political whore for the Republicans.

DeSantis knows how to stroke egos. He has had plenty of practice with Trump. It's evident in his public statements.

During a 2020 Federalist Society conference held in Disneyworld, DeSantis gushed over his Supreme Court connection stating, "Thomas is the greatest living justice."

To Supreme Court observers Thomas has always been the squeaky wheel who rolls with right-wing politicians and conspiracy loons. His track record of rulings clearly points that out.

It's plain to see that DeSantis is working with Thomas's wife, and him, to achieve his goal of running for president. He believes a direct connection to the Supreme Court will bolster his campaign. 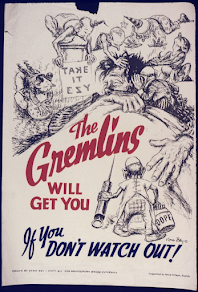 Since losing his sanity about two decades ago Rudy Giuliani has since morphed into a gremlin.

As you may be aware gremlins are mischievous creatures that are known to cause malfunctions in aircraft or other machinery.

The term "gremlin" originated with the Royal Air Force whose pilots used the term as a slang for sabotaging aircraft in WW I.

To be exact, gremlin Giuliani is an updated version sabotaging American politics and the constitution, instead of aircraft.

Despite all the court cases he faces for helping sabotage our electoral system, he still pops up in unexpected places. 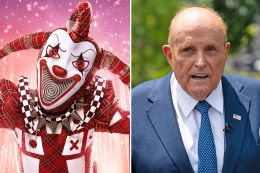 For example, I just found out he was a contestant for the TV series The Masked Singer! WTF! Apparently, a couple judges walked out during the show's taping when Giuliani revealed his ugly mug.

The question is, why isn't Giuliani in jail yet? His litany of crimes over the past few years should have resulted in an extended stay in prison instead of doing a guest appearance on a game show.

Yes, it's a sign of the times when insurrectionists are called patriots, and the former president is spreading lies about the election he lost in an effort to destroy democracy.

Giuliani is Trump's gremlin. Always ready to attack reality if the boss says too. The conversion from being a real patriot and America's mayor to one of Trump's creatures is complete. 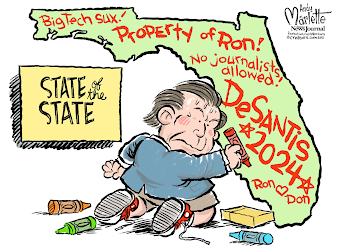 Florida Gov. Ron DeSantis has dreams of being a dictator.

After watching his mentor Trump suffering defeat in 2020, DeSantis's DeSnake's lizard brain has been hatching a pathway to the presidency. Whatever loyalty he feigned for the former Grifter-In-Chief has slipped like a snake shedding its scales.

It's not all out warfare yet between mentor and master, but all the warning signs are surfacing in the Floridian swamps where he's actively recruiting members from Trump's base.

In a few short years DeSnake has proposed putting together a private state militia only answerable to him.

-He's defied science by ignoring CDC regulations to fight the pandemic in favor of quack cures for COVID 19.

-He's currently threatening learning institutions with reprisals if they don't obey him and ignore the CDC's recommendations to wear face masks.

-He's actively supporting anti-vaccination lunatics and has even called Trump out for promoting the vaccine and booster shots.

Taking everything into account, DeSnake is starting to make his move and further separate himself from Trump by out Trumping him and waiting to see if he gets convicted of any crime that would exclude him from ever running for office again.

Meanwhile to enhance his reptilian reputation DeSnake is busy trying too illegally chart the course of redistricting efforts. If his court challenges fail his backup is to veto a fair plan.

There's one more hurdle for DeSnake. If he doesn't get re-elected governor in November - and loses the influence that comes with the position - his chances of getting elected for anything other than dogcatcher will be slim to none. 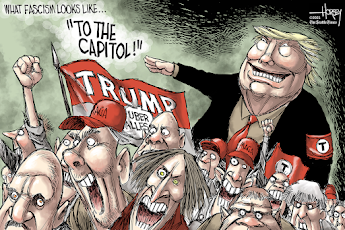 The first coup attempt failed, but not for lack of effort.

In recent days lawmakers have uncovered smoking guns from that first attempt to overthrow our democracy.

Thanks to the Trump files from the National Archives that were turned over to the Jan. 6 Select Committee revelations have been coming fast and furious.

Smoking guns are shooting down the lies by Trump and his fellow traitors.

The fact that Trump cronies were prepared to seize voting machines across the country by using the military, has surfaced through seized documents and interviews.

What was once a murky picture of insurrection has been clarified and its vast scope revealed to investigators. What has emerged is Trump came closer than many thought to seizing power after he lost the 2020 election.

After a year of investigating the cause that led to the Capitol being assaulted a picture of corruption at the highest levels has become clear.

Another thing has become apparent as lawmakers close in on Trump. A second coup is underway.

As investigators close in on the failed coup attempt, Trump's desperation has skyrocketed. He's resorted to holding hate rallies to gin up his hardcore base by furthering the Big Lie amid the flood of information condemning him.

His last rally saw him threatening prosecutors in Washington DC, New York, and Georgia. He made it clear that he wants his supporters to launch coup 2.0 if he gets convicted of anything.

Trump wants to see a repeat of Jan. 6, but on a larger scale. His minions have been actively promoting voter suppression in Republican run states since he was kicked out of the White House.

As I write this the push to overturn our electoral system has gone on steroids. It's happening today. Out in the open for all to see.

Trump's distain for our Constitution and the rule of law has actually increased to the point that he now feels invulnerable. He isn't even trying to mask his intentions.

He's so confident he's called out AG Merrick Garland and threatened to start a revolution if he turns him over to the DOJ for prosecution. It's a slap in the face.

The question now is Garland going to reply to this overt challenge to our democracy? Or is he going to remain silent and let Trump hang himself with his own big mouth at future hate rallies?