I’ve read where men who smoke pot a lot get big boobs, but was amazed to find out that there’s another way for men to get big boobs -without surgery of course.

All they have to do is smack a rifle against one side of their chest in countless precision military drills and the other side will sprout a boobie.

It’s important to note that the soldiers mentioned only end up with one big boob.

No really! I wouldn’t kid you…well maybe some times – but not this time. Fact: Over 70 percent of the German Wachbataillon Battalion's soldiers have been diagnosed with significant gynecomastia (big boobs).

I’m not really sure anyone – including the men affected – is too worried about this odd development. I suppose they still feel macho enough, but they do have to be careful beating their chest in a typical guy-like reaction when excited.

Meanwhile, German military officials have promised to keep an eye on the men's breasts. (That just doesn’t sound right you know?) Here’s the story ripped from today’s headlines: 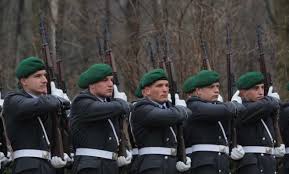 “Like armies everywhere, the German military is filled with macho, chest-thumping rituals. But one battalion has found there's a downside to all that chest-thumping: The male soldiers are growing breasts — and only on their left sides.

The Wachbataillon unit performs precision military drills at official ceremonial functions, the German Herald reports. Many of their drills involve smacking their rifles against the left side of the soldiers' chests. And all that pounding on the same spot has stimulated the production of hormones that cause man boobs to grow.

"There is a very significant link between the activity in the … battalion and the development of the breast on the left side," Dr. Bjorn Krapohl, director of plastic surgery at the military's main hospital in Berlin, told the Herald. "They need to change the way they drill."

The growth of male breasts isn't altogether uncommon: The condition is known as gynecomastia, and it's caused by an imbalance in testosterone and estrogen levels. There have been cases where chest injury has caused gynecomastia, though it's rare. Plastic surgeons report that teenage boys — who are particularly prone to the condition — often have breast tissue removed when gynecomastia becomes a big psychosocial problem.

In a study of the German soldiers, published in January 2012, Krapohl and colleagues found significant differences between the guards with gynecomastia and a control group of healthy males without signs of gynecomastia. Those in the Guard Battalion in Berlin had lower testosterone levelsand higher body mass indexes (BMI), or a measure of body fatness. [ The 9 Most Bizarre Medical Conditions ]

While the researchers hypothesize the mechanical stress from daily drills may be the underlying cause, they are not sure exactly how the "chest thumping" causes the breast growth. "There are no experimental studies identifying possible mechanisms at the cellular level that might induce gynecomastia mechanically," they write in the journal article, adding that these findings may provide new impetus for such studies. The research is detailed in the journal GMS Interdisciplinary Plastic and Reconstructive Surgery DGPW. (Read the rest here)