“Boy, what’s it with the NRA and their disdain for the very real threat of assassination that black leaders face?

First they put Gun Appreciation Day on MLK weekend, because there’s no time like the public mourning of an important leader felled by a racist gunman to celebrate guns. Now they’re trying to drum up resentment about the first black family in the White House having the same security detail that all presidential families get.

Needless to say, the ass-cover to deny the obvious racism and general eliminationist bent of the NRA’s base is an argument so profoundly stupid that even the dumbest ass gun nuts won’t buy it. No one buys the notion that the President has security detail because he’s an “elitist” who is hoarding all the awesome guns for himself. Everyone knows that it’s a direct and necessary reaction to a society where political assassination is sadly common, in no small part because it’s ridiculously easy for any asshole with a vendetta to get a gun. Josh Marshall had the appropriate response:

There are so many vile things about this ad. But one thing to note is the ad is really only designed to appeal to people who have a deep — really deep — animosity toward the President. The sort of people who don’t think he and his daughters should be in the White House and wish him the sort of ill citizens should never wish upon a freely elected head of state. 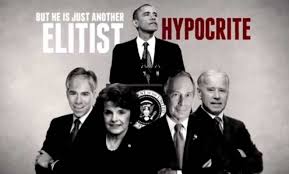 Exactly. This ad isn’t making the case for guns—if anything, drawing attention to the ever-present danger that the President lives under of being shot is an argument for more gun control—but it’s just feeding off the not even subtly racist obsession right wingers have with telling each other that it’s obscene that the President and his family get to live the same lifestyle as all the white Presidents and their families. (Example!) You know, even though it’s more humble than that of their preferred candidate who lost and had to return home to his dressage horse.

This is what the NRA’s sole purpose is: To drum up racist resentments and gender anxieties so that their industry funders can sell more guns to their customers. This ad, which I’m not linking, might as well just come out and say it: “Mad that the President thinks he’s all that because he’s the President? Well, why not buy a gun? It won’t make you President, but it will give you the illusion of having more power.”

The NRA is an ad company pushing a marketing ploy that’s more transparent than Axe Body Spray’s. It’s time to start treating them like it.” (Source)