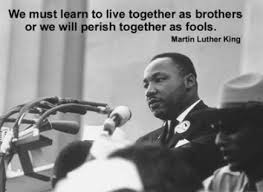 It’s a sign of the times. This new generation doesn’t seem to be getting King’s message.

The irony of this happening on a street named for him, on the day everyone was celebrating his birthday, is practically off the charts. Check it out:

“Five people standing outside a grocery store on Martin Luther King Jr. Boulevard in New Orleans were wounded in a drive-by shooting on Monday, police said.

None of the injuries was considered life-threatening, officials said.

Police Superintendent Ronal Serpas, who was among those who responded to the scene, told NBC station WDSU that six teenage boys or young men were outside a small grocery when a late-model white sedan drove past, with shots fired from inside the car.

The car then sped off.

A New Orleans Police Department official told the station that a captured the incident and that video recordings were being reviewed.

The irony was not lost on police or residents.

"It's ridiculous this violence happened on this day," one witness told WDSU."It's the state of affairs in our nation that young men do not heed the words of Martin Luther King Jr.," Serpas told the Times-Picayune, which also reported that the shooting did not appear to be linked to the parade.” (Source)