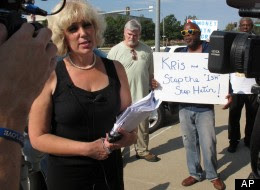 It’s the story that won’t go away…birthers in our society who hate the president and will literally blame every bad thing that happens on him.

Some, like Donald Trump, enjoy the notoriety, and don’t mind being called a “birther,” a badge of honor for some and a term of derision by others. The Donald enjoys making crazy offers whenever the news cycle slows down.

But people like Orly Taitz have gone overboard into fantasyland when it comes to accusing Obama of mysterious crimes. She has reinserted the word idiot into the national dialogue when talking about “birthers.”

It’s hard to say what motivates a person, but Taitz appears to like the press she gets when she publically makes an ass out of herself. Skeptics resent being associated with the obviously brain-rattled Taitz.

And wait till you read what The Tea Party had to say about the murders. They blame the Sandy Hook tragedy on too many sex movies! No, really.

“ Birther queen Orly Taitz blames President Barack Obama for the Sandy Hook school massacre, saying the president is "trying to show that some person can appear out of the blue and slaughter people" so he can ban guns and "gain an absolute power."

Taitz, an attorney and dentist from California, has been using her website in recent days to raise conspiracy theories about the school shooting, which left 28 people, including 20 children, the shooter and his mother. Taitz questioned whether Adam Lanza, 20, who police have identified as the killer, could have been under mind control or drugged to fulfill a political mission.

Where was Adam Lanza in the days leading to the massacre? Was he handled by someone? Was he drugged? Was he subjected to hypnosis?

The word assassin comes from the Arabic word “Hashish”, name for a drug, I believe correct translation is opium. For thousands of years, since ancient times assassins were drugged.

Was Adam Lanza drugged and hypnotised by his handlers to make him into a killing machine as an excuse as the regime is itching to take all means of self defense from the populace before the economic collapse?

In a separate post, Taitz questioned whether Obama was trying to ban all guns.

"Obama and his regime are trying to disarm all of us, in order to gain an absolute power," Taitz wrote. "They are trying to show that some person can appear out of the blue and slaughter people."

Some of Taitz' conspiracy theories are circulating on other websites. Talking Points Memo reported one conspiracy theory that involved Lanza's father, Peter, testifying before the Senate Banking Committee regarding the Libor scandal and needed to cancel the hearing. TPM said no hearing is scheduled.