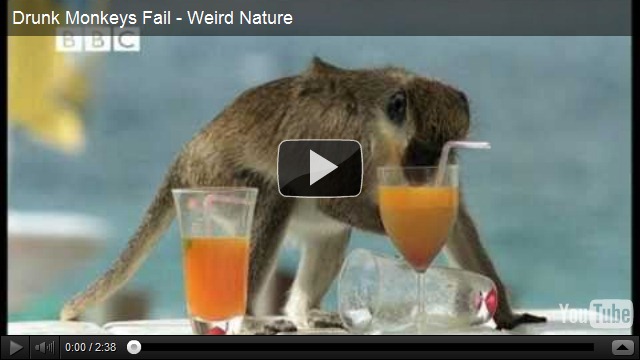 Do you recall the phrase, “More fun than a barrel of monkeys?”

Imagine then, a barrel full of drunk monkeys! Now that would be entertaining.

Seeing as they are getting free drinks the least the silly simians could do would be to tip the waiters!

“A video of monkeys getting drunk in the Caribbean might sound like it's solely for entertainment, but this BBC "Weird Science" footage of intoxicated vervet monkeys snatching drinks from unsuspecting beachgoers is unexpectedly informative.

While some monkeys go straight for the mai tais, others will only drink Fanta -- it turns out this group's population of nondrinking monkeys is roughly proportional to the teetotaling population in humans, which suggests that our alcohol preferences and tolerances are largely determined by our genetic makeup.

The scientists also observed that monkeys who are heavy drinkers might become better leaders; maybe they'll be mixing their own drinks soon.” (Source)

Posted by ImBlogCrazy at 7:28 PM