Winning: Whatever it takes…even maintaining a bounty on foes 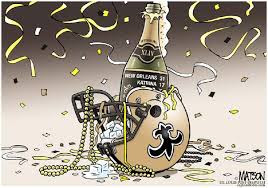 The first football coach to be canonized by the sport was Vince Lombardi. It was he who said, “If winning isn't everything, why do they keep score?”

Nothing has really changed since Lombardi’s days, and this latest story about the National Football League illustrates that:
New Orleans Saints players and at least one assistant coach maintained a bounty program the last three seasons for inflicting game-ending injuries on opposing players, including Brett Favre and Kurt Warner — a pool that reached as much as $50,000 and paid specific amounts for ''cart-offs'' and ''knockouts,'' the NFL said today. I can’t say I’m really surprised.

I can recall many conversations with other football fans who also wondered if teams purposely targeted other teams quarterbacks over the years. Not one of us thought of a paid bounty plan however. The Saints are the first team caught doing this. Maybe they were the only team that has ever had a bounty program. Frankly, I think there’s other teams out there that have/had similar incentive programs to take out opponent’s quarterbacks.

Remember; it’s all about winning. Especially in this day and age. It doesn’t matter how your crossed the finish line, it only matters that you’re the first one to do so. Second place is unacceptable. Like actor Charlie Sheen said (during a drug crazed rant), “Winniiiiing!”

Posted by ImBlogCrazy at 5:21 PM