Supersized saddles for fatties, and Cops go after 5-year old for overdue books

The holidays are over and it’s time to get back in the saddle… Today we’re going to look at why saddles have to be made larger nowadays. And for that little touch of stupidity that seems to make the world go around, there’s the story of a 5-year old who got a visit from the cops because of overdue library books.

Supersized saddles find home on the range as Americans fatten

In a sign of America's growing girth, dude ranches and hunting camps in the Northern Rockies are adding heavyweight horses and super-large saddles to seat swelling numbers of outsized clients.

With the Centers for Disease Control and Prevention reporting that a third of U.S. adults and 17 percent of children are obese, Western wranglers and outfitters say they are doing all they can to accommodate the widening of waistlines and other anatomical areas. "To put it bluntly, we call them the big-butt saddles," said Lee Hart, owner of Broken Hart Ranch in Montana. The business near Yellowstone National Park seasonally provides trail rides and guided hunting by horseback to nearly 2,000 people from across the country.

Hart and others said the 18-plus-inch saddles they now stock were all but nonexistent 30 years ago, when just 15 percent of American adults were considered obese. At that time, a 16.5-inch saddle would have been considered ample enough for a stout rider.Guest ranches and outfitting operations also are bulking up on riding stock crossbred with draft horses -- weighing in at roughly 1,500 pounds -- to fit their super-sized customers. 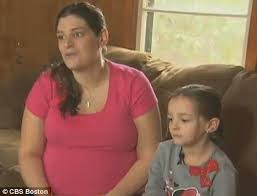 Can it really be true? Police dispatched to retrieve overdue library books from a five-year-old? It is.

The chief of police in Charlton, Massachusetts sent a uniformed police officer to pay a visit to a home and demand the return of two overdue library books.

A sergeant from the Charlton Police Department was dispatched to the home of Shannon Benoit and her five-year-old daughter (pictured right). The sergeant’s task: to investigate two library books that were a few months overdue. The CBS affiliate in Boston covered the story:

The books were recovered and returned to the shelves for use by other Charlton residents.

Was this a good use of police assets? Even the man assigned to the case was not so certain. He told the CBS reporter;

“Nobody wanted to, on this end to get involved in it,” says Sgt. Dowd. “But the library contacted us, and the chief delegated, and apparently I was one of the low men on the totem pole.”

Posted by ImBlogCrazy at 8:59 AM