Booze hounds acting badly in public – have another drink!

Today we’re going down the path of people acting badly in public places. Note that both stories involve drinking and drunken activity.

But that’s okay right? Booze is legal. Drunken behavior in public is common. But heaven forbid we legalize marijuana! So pot heads watch drunks beat themselves up with amusement.

A 36-year-old woman was charged Wednesday after punching, scratching and sliding her buttocks against a painting worth more than $30 million, authorities in Colorado said.

Carmen Tisch is accused of pulling her pants down to rub up against the work, an oil-on-canvas called "1957-J no.2", by the late abstract expressionist artist Clyfford Still.

Tisch allegedly caused $10,000 worth of damage to the painting.Citing the police report, the Denver Post reported that the suspect was apparently drunk at the time.

Tisch was charged with felony criminal mischief on Wednesday and has been held on a $20,000 bond since the incident in late December, said Lynn Kimbrough, spokeswoman for the Denver District Attorney's Office. Kimbrough said Tisch urinated after she rubbed up against the canvas at the recently opened Clyfford Still museum in Denver.

"It doesn't appear she urinated on the painting or that the urine damaged it, so she's not being charged with that," Kimbrough said according to the Denver Post. 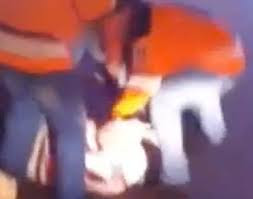 A man boasted on Facebook that he and his friends beat up two Rangers fans outside a Philadelphia cheesesteak hotspot following Monday's NHL Winter Classic. Police have released video footage online in the hope of catching the group of Flyers fans, but a man named Edward Neary appeared Wednesday to admit his participation in the attack.

Neary wrote on Facebook, "it was me and my friends do something about it," and then used a homophobic slur. His Facebook page, which has since been deleted, said that Neary graduated from high school in 2009. Neary later blamed the incident on his friends, identifying three by name, and claiming the Rangers fans instigated the fight.

He made the claim on a Facebook page for Flyers fans called Broad Street Hockey. The operator of the page had posted video of the fight in an effort to help police identify the attackers.Three suspects wearing Flyers jerseys are seen in the video repeatedly punching the two men in Rangers jerseys outside Geno's Steaks in the south of the city. Officials said the attack occurred around 7:15 p.m. local time.

One of the victims, later revealed to be off-duty Woodbridge, N.J., police officer Neal Auricchio Jr., was hospitalized with a concussion following the attack, his father told the New York Post. He said his son, a former US Marine who served two tours and earned a Purple Heart, had driven down to Philadelphia with a friend to watch the outdoor Winter Classic between the two rivals.

Posted by ImBlogCrazy at 9:51 AM