Geologists suspect ‘Fracking’ is the cause of earthquakes in Ohio 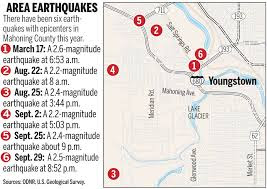 I’ve been following the earthquakes in Ohio with interest. I was born there, not far from Youngstown in 1950.

Earthquakes is one area that I didn’t touch on. People should be aware of what happens when we mess with mother nature.

“Ohio has suspended operations at five deep-well hazardous fluid disposal sites after a series of 11 earthquakes in the Youngstown, Ohio, in the past year, including one on Saturday with a magnitude of 4.0, officials said. The Ohio Department of Natural Resources said Sunday it was halting operations at five Mahoning County wells owned by Northstar Disposal Services LLC as a precaution, citing concerns of a possible link between well activity and the quakes.

"Our geologist would say there is a strong chance there is a fault line very close to the site of the well," Ware said, adding the department was concerned that pressure from the fluid disposal could be affecting a previously unknown fault line.

Earthquakes induced by human activity have been documented in a few locations in the United States, Japan and Canada, according to the U.S. Geological Survey website. The largest and best known resulted from fluid injection at the Rocky Mountain Arsenal near Denver, Colorado, where in 1967 a 5.5 magnitude earthquake followed a series of smaller quakes.

Ware said Northstar began drilling in mid-summer. The injection disposal started in December 2010 and the first earthquake occurred in 2011. A representative for Northstar could not be reached for comment on Sunday.

Earthquakes are not common in Youngstown, and seismic records going back to 1980 show no reports of earthquakes prior to the series of quakes last year. A 2.1 magnitude quake, the first of 11 in 2011, was reported on March 17. More were reported in August, September, October, November and December.

Ware said after a 2.7 magnitude quake was reported on December 24, Northstar voluntarily lowered the pressure at one well. On Saturday a 4.0 earthquake was reported, "causing the Ohio Department of Resources to recommend all wells in the area stop operations," Ware said. After the initial spate of earthquakes in the area, four more monitors were set up near the first well to get more data on the source of the seismic activity.

There are 177 disposal wells currently in operation in Ohio. The Mahoning County well is 9,000 feet/ deep and is used to dispose of hazardous fluids, injecting fluid that cannot be disposed of in landfills into sandstone well below groundwater level.”