Fighting Somali Pirates with Science is okay, but armed guards are better according to statistics 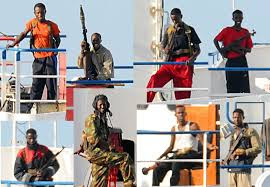 “Piracy is a serious problem in the Gulf of Aden and the Indian Ocean. While NATO, Russian, Iranian, and Chinese ships all escort merchant vessels through the Gulf of Aden, foreign militaries can't be everywhere at once. Ships traveling through dangerous waters often need to create their own improvised anti-pirate defenses ... and the market for these products is booming.

A variety of arms contractors and boutique manufacturers are producing everything from “stinky water” walls to high-powered water cannons to deter murderous Somali pirates.

One firm, the International Maritime Security Network, markets an 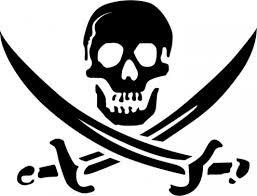 expensive defense package called the “Triton Shield Anti-Piracy System.” The integrated product, which includes everything from on-ship security guards to a specialized camera system, also creates a wall of

very stinky water. Bloomberg's Julie Bykowicz uncovered an impenetrable wall of stinky, foul-smelling water that can be deployed by Triton against potential pirate skiffs. International Maritime Security's Ralph Pundt described the smell as that of “a skunk on steroids.”

Lasers can also be used to defend against pirates. Earlier this year, British defense contractor BAE Systems announced the successful deployment of its prototype anti-pirate laser. BAE's Laser Distraction system uses a special eye-safe laser that can either provide a visual warning to pirates at distances greater than two kilometers or temporarily disorient attackers at closer distances. Ships can either deploy the Later Distraction system semi-autonomously or have a crew member operate the product.

Meanwhile, fellow British manufacturer BCB International (which has been featured in Fast Company before for its miniature drones) markets an anti-pirate air cannon. The Buccaneer is a lightweight air cannon designed to fire and deploy a net around any small craft trying to board a ship. The cannon has a range of approximately 2,700 feet and fires proprietary projectiles that create a net in the water around the craft. Apart from net projectiles, the Buccaneer also fires high-powered smoke projectiles.

BCB International's Phillippe Minchin told Fast Company that “the use of lethal force should be selected as a ‘last resort,’ whereas non-lethal protective measures can help to create a ‘layered’ and proportional defense around a vulnerable vessel or offshore platform. BCB International’s Buccaneer launchers utilize compressed air to launch entanglement nets up to 60 meters, which are designed to foul oncoming skiffs’ props and therefore disable the attacker before they have a chance to attempt boarding. Usefully, the Buccaneer can also deploy payloads such as smoke cartridges out to 700 meters, which means that like the LRAD (Long Range Acoustic Device) system, it can create an effect on a target well before it comes into close proximity with the vessel.” 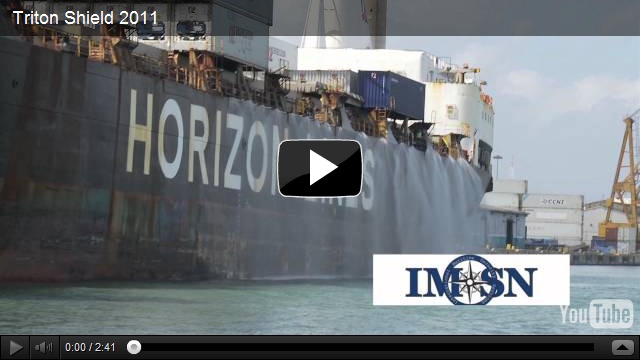 This ship is equipped with the latest safety package called the Triton Shield anti-piracy system.

LRAD is a proprietary product of the LRAD Corporation, who make a significant portion of their sales from commercial shipping.

Fast Company reported previously on the growing use of advanced technology by Somali pirates. Because pirates have begun using more sophisticated methods to trap shipping vessels — it's not unknown for savvy maritime criminals to track sea traffic via Internet postings — protective measures have changed. 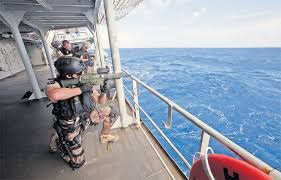 However, according to one expert, the best security is the old-fashioned kind. Jay Bahadur, author of "The Pirates of Somalia," believes that armed guards are the most important anti-pirate defense. In an email, Bahadur told Fast Company that while “I think there have been some valid counter-piracy technologies developed by defense contractors — the proposed BAE "laser distraction system" comes to mind — but in the end, it comes down to what ship owners can afford.

Commercial shipping is one of the most cutthroat industries in the world, and ship owners don'

t have the budgets to spend on space-age defenses. The recent drop-off in piracy has been due to the increased use of armed guards, not technological innovation, which in turn have been made economically feasible by skyrocketing ransoms and lengthening captivity periods.

One insurance company issued a stat a few months back that 80 percent of pirate attacks were being repelled by armed guards, and no vessel employing them has been hijacked.”

Additional anti-pirate security devices are expected to be unveiled at the 2012 Transport Security Expo, which will be held in London this coming November.” (article source)

Posted by ImBlogCrazy at 4:19 PM