The Cats Out of the Bag: Trump is Crazy and His Enablers Know It 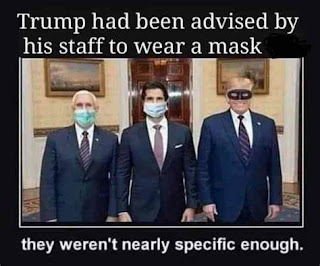 After four excruciating years in office Trump has shown us he's a malicious narcissist and sociopath. His record backs that up.

But Trump on steroids (which can make you either euphoric or pissed off) is a national threat!

The head of the NSA came out yesterday and said Trump's erratic actions are endangering national security.

COVID-Trump is so unhinged his staff and advisors are on pins-and-needles every moment as they tip-toe around a White House that's been a vector for the virus for some time now.

No one really knows how sick Trump is. That's because his enablers (including doctors) won't give that information. They all smile for the cameras and act like Trump is doing swell...by golly.

Trump's attacks against the Post Office are designed to make people think it's not safe to mail in completed ballots in a vile attempt to discredit the results of an election in which he knows he's losing.

In recognition of Trump's questionable sanity, Nancy Pelosi introduced legislation yesterday that would create a bipartisan commission to determine a sitting president's ability to carry out his duties of the office.

At a press conference she said the measure is not specifically for Trump, but suggested he was the reason for coming up with the legislation.

Republicans in the House and Senate are worried about not being re-elected because of their attachments to Trump.

But what can they do? When they bowed down and kissed Trump's ring and ass, their fate was sealed. They became fodder for Trump's ambitions.

After four years of standing idly by as Trump broke laws with regularity and lied about everything, the bitter fruit of inaction is poisoning his enablers with three weeks to go before the election.

I feel no pity for any of them.

In fact, I think there should be Nuremberg style trials after Biden gets in office for Trump's minions who corrupted our entire government following their supreme leader's orders.

I don't advocate hanging them however, like the German enablers of Hitler who were tried and executed. Life in prison is fine.

Quote for the Day: "I'm pretty sure that if I slapped the crazy out of you there wouldn't be anything left." Anonymous