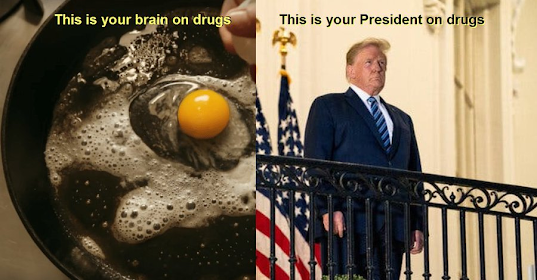 Watching Trump slowly ascend the White House stairway to the Truman Balcony when he returned from Walter Reed oddly reminded me of a scene right out of the 2008 movie "Evita."

Evita Peron was the wife of Argentine dictator Juan Peron, and was known for her kindness to the poor. Madonna played Evita in the movie, and recorded a hit song, "Don't Cry for me Argentina."

There's a scene where Madonna is standing on a balcony and singing while an adoring crowd below listens.

FYI: The Lincoln Project put out this video Covita yesterday. It's hilarious!

In my interpretation of the movie and musical it's not an icon addressing an audience; it's a physically and mentally deteriorating dictator defiantly ripping of his face mask to show the world how stupid he is.

"Don't cry for me, Argentina

The truth is I never left you

All through my wild days

I kept my promise, don't keep you distance."

"Don't cry for me, America

The truth is I'm Covid free

is for the country

there's no need to maintain a safe distance."

Everything in Trump's world is a production where he refocuses reality into an alternate universe where he's a stable genius and everyone loves him.

It's an American production that I hope we never see again after voting Trump out of office.

Quote for the Day: "Meanwhile, back at reality." George Lucas